21 “Boring” Stocks You Need To Know About

We have a lot to talk about today.  Our Economic dashboard, the state of SP500, sectors that are on the move, and lastly we’ll continue our scan for boring stocks from yesterday. 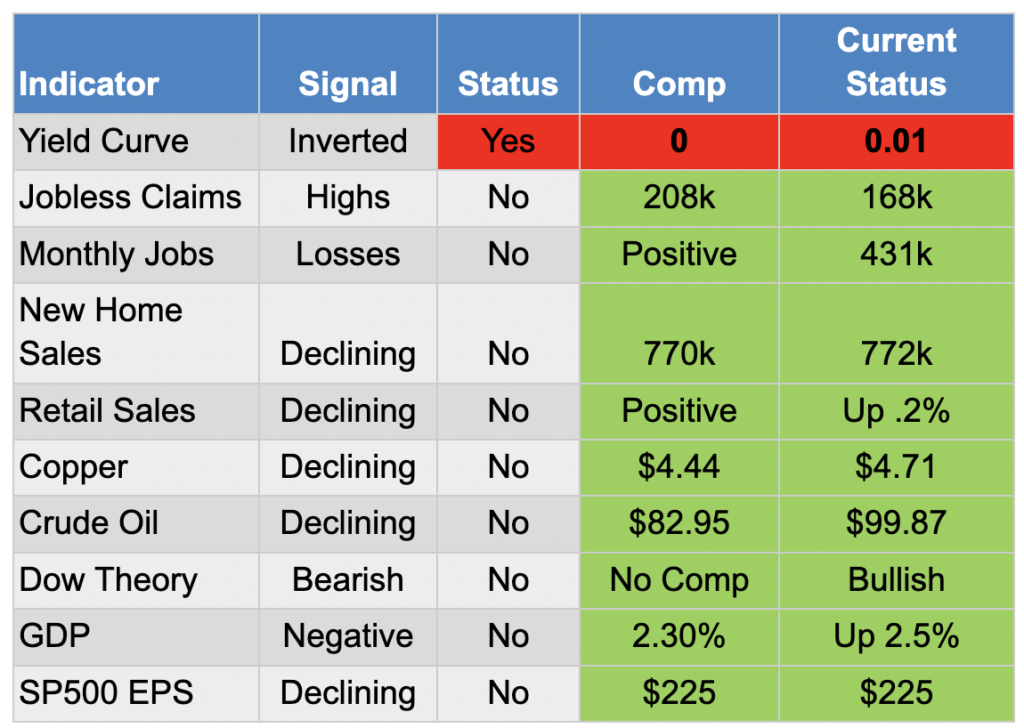 The weekly jobless claims fell to 166k, the lowest level since 1968!  The market was estimating 200k, but the number came in much lower than expected.  Is this good news for workers? There are about 5 million more employment openings than available workers, which is driving up wages and contributing to inflation.

Before you get too mad at the employees demanding higher wages and driving up inflation, keep in mind that the majority of SP500 CEOs saw an 11% increase in their salaries and a lucky 33% of them saw an increase of 25% or more.  See, this is everyone’s fault.

We saw an inverted yield curve that has historically been a predictive indicator for a future recession, but the Fed bond-buying and quantitative easing from other central banks around the world have called into question if the yield curve inversion should be as feared as it once was.

The  SP500 has been dancing off its 200 simple moving average, the moving average that most use to determine the long-term trend.  We had a nice bounce starting March 15th, lasting for two weeks and we saw a break above the average.  Things were looking up, but now we’re in an area of congestion.  Here’s a chart of the SPY – showing a pullback and after a late afternoon rally, we’re now trading above the 200SMA. 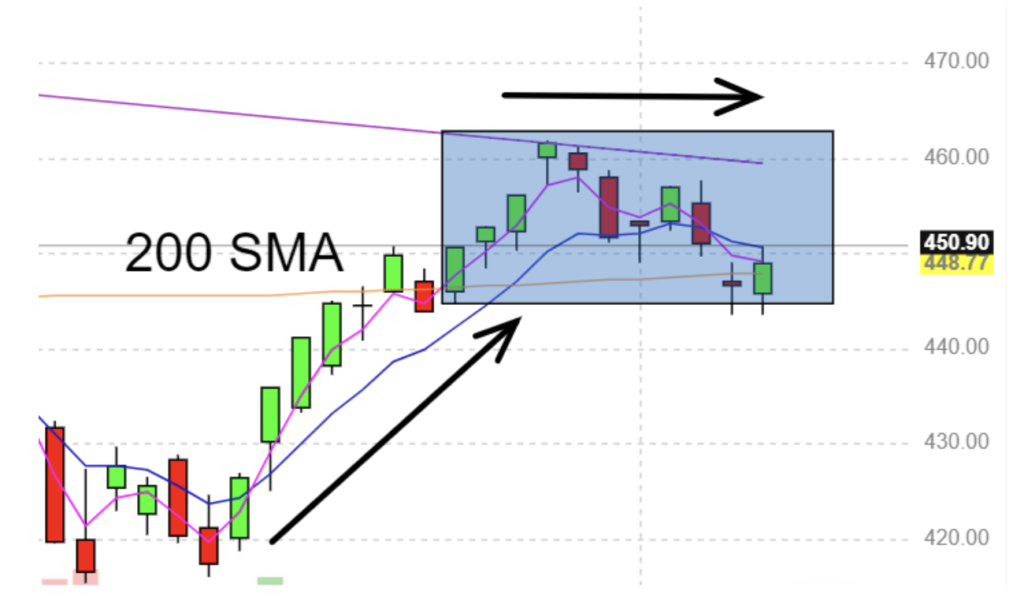 With earnings around the corner, I’m counting on more sideways movement along the 200SMA until we get another catalyst event, like earnings next week.

Let’s take a look at the sector graph for Healthcare, XLV. We’re seeing a breakout above the high set in December of 2021.

Once we’ve identified a sector we like, let’s break that down and try to find a stock within the sector that might be a leader in the potential move up.

Johnson & Johnson (JNJ) is also breaking out from its August high.  With the market down this week, JNJ has managed to buck the trend and edge higher.  I’d keep an eye on JNJ and look for long-term resistance of $180 to become the new support level.

Yesterday we built a scanner that showed us low volatility stocks with increasing earnings per share and stocks that are above some of their key moving averages.  If you recall we finished up with 21 stocks in our basket.  Here’s the list: 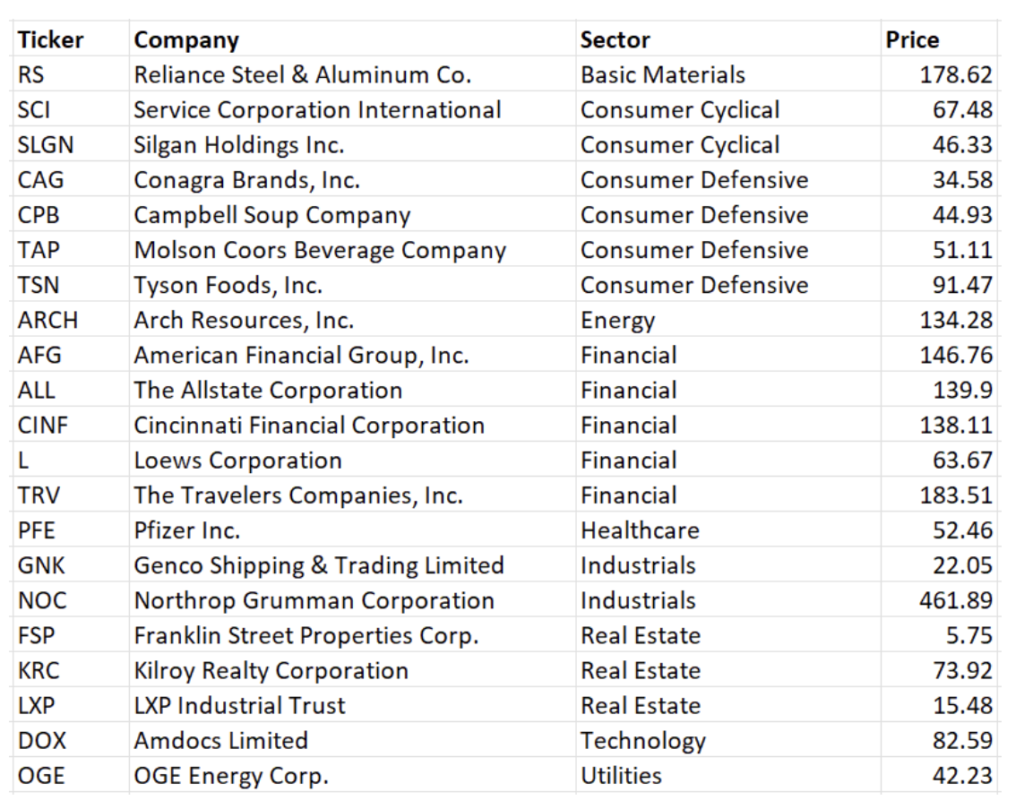 You may not have heard of some of the names on this list, but it’s no surprise to see Campbell Soup, Molson Coors, and Tyson Foods as the Consumer Defensive favorites.

For those who may not know, the reason Real Estate REITs (real estate investment trusts) often pop up on a scan like this is that they offer substantial dividends.  They are required to distribute 90 percent of their taxable income to their shareholders.  The funds for the dividends come from the stable stream of rents paid by the tenants of their properties.

And while past performance does not guarantee future results, look at how the stocks on our list performed compared to the SPY (SP500 ETF): 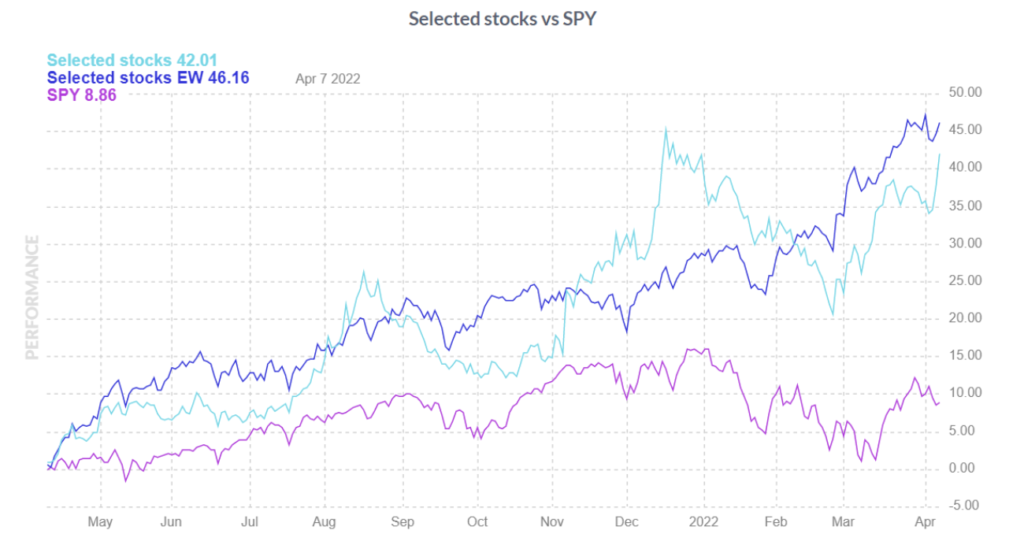 The SPY is the purple line while a market-weighted and equal-weighted portfolio made up of our stocks are the two blue lines.  Since May of last year, the stocks we just found on our scanner are collectively up over 40% while the SPY is up 9%.

Next week we have earnings, which is sure to get the markets moving again.  We have a number of good topics to discuss next week you won’t want to miss!