The 10-2s spread could invert today (it’s essentially at ‘zero’). Some outlets (CNBC) reported the curve inverted yesterday; but that inversion was for less than 60 seconds. Seriously. 60 seconds does not a recession signal make. When the curve closes in an inverted state, that is far more meaningful.

We detail jobs and jobless claims below.

I’ve added Comps to the Economic Status Board – what to compare a signal against. For example, when I’m watching Copper, I’m watching the 200-Day Moving Average (Simple), not just short-term trading metrics.

Or, for Retail Sales, I want sales to be a positive number, not a negative.

Quick notes: Comps will change from month to month. Jobless Claims is based on the 4-Week Moving Average; with claims running at multi-decade lows, this comp is at the lower end of its historical curve. 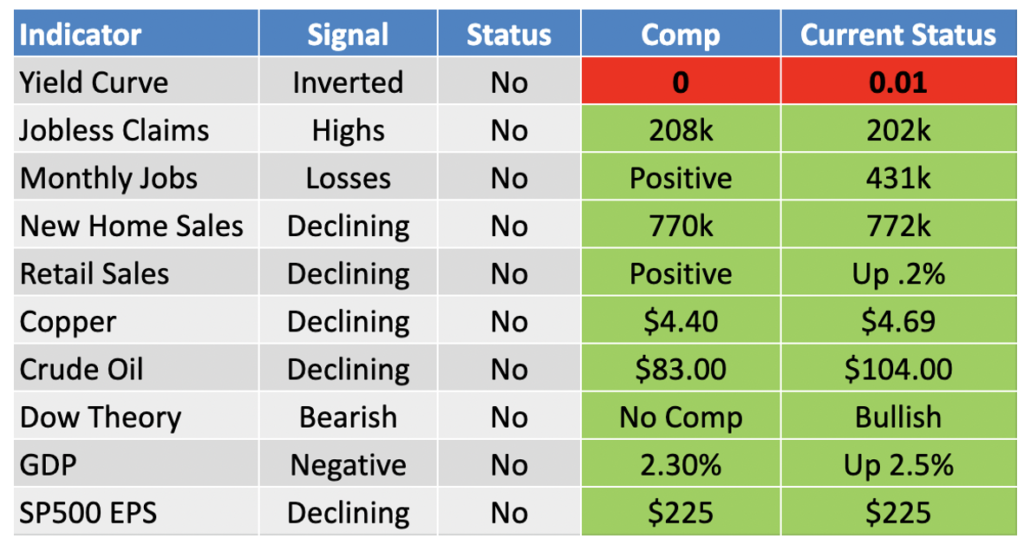 While much of the media focused on the headline inflation number from yesterday’s PCE Price Index report, the number most concerning was the slowdown in consumer spending in March.

Expectations were for a .5% increase in Personal Consumption Expenditures; actual increase was .2%.

Contrast that against January’s 2.7% increase and you can see the impact of rising prices affecting consumer spending.

That’s a warning sign since consumers (obviously) drive growth, but it remains in positive territory for now.

Markets traded lower but flat through most of Thursday until a final hour collapse cost the indexes nearly 1% in additional losses on the day.

This isn’t uncommon, and as we move into April, we’ll determine where money is flowing (sectors, stocks) for you. Also worth noting is the demand for shorter-term bonds is increasing, which suggests a larger flight to safety than has been noted.

The Weekly Jobless Claims report came in higher than the previous week (202k vs 187k), but it’s important to note that both numbers are well below historical levels.

The March ADP Private Payroll report did have a trend worth paying attention to: the Leisure sector led all private sectors in total jobs added, at 161,000. That accounted for 35% of all private jobs added in March.

That sector is restaurants, bars, hotels, etc. It’s worth watching because if it declines/reverses, that category tells us there is a shift in consumer spending (away from discretionary spending – you know, things you want but don’t need); but if it continues to rise, that will confirm a trend, which I discuss below.

First, this sells a .50% rate increase when the Fed meets in May. Barring any reversal in the employment market, you should expect that half-point increase.

Second, previous months were also revised upward by 95K jobs; so overall, the jobs market is healthy, but too hot on wage inflation.

This is a trend I want to put on the ‘watchlist’ – the do-it-yourself trend. That’s home repairs, auto repairs, etc. With that, low-cost retail outlets (we detailed these in our Inflation Beaters report at Wealthy Investor last month), one of which has outperformed the market in the last three months: 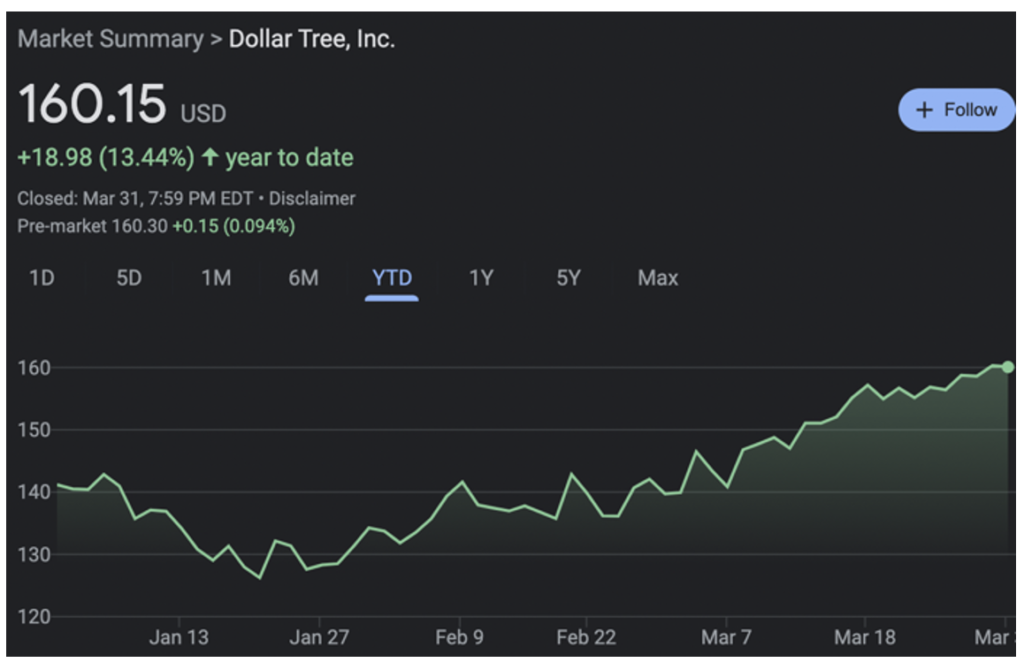 Dollar Tree is outperforming against competitor Dollar General (which is down -25% on the year). If inflation continues to run hot, don’t be surprised to see consumers change their spending habits to save money wherever they can.

Watch Travel and Leisure This Summer

Still, I’m hopeful for a solid travel season this summer (which sounds strange given all the negative news). I think – but can’t yet prove – that people will hit the road as the pandemic fades further, no new Covid variant poses significant risk (at this time) and, as we continue a return to normalcy in daily life.

Even if inflation is hot, I’ll be looking at low-cost motels/hotels, airlines, even cruise lines. I still believe there remains pent-up demand for travel.

Why I say that – while consumers spent less in March, they MADE more. Personal incomes rose .5%, so a net positive of .3% when you subtract spending. Savings rates are also increasing (I’ll get data on this) which means, at some point, people will spend that money

We’ll see what transpires in the months ahead. Spring Breaks and Memorial Day will provide some clues.

Up ahead next week, we’ll be looking at Q1 performance across the Traders Reserve services and have more Q2 outlooks for you.