The Fed got aggressive and announced a 75 basis point increase in interest rates and the market reacted positively, with the Dow up over 400 points at one point in the day.  We’ve been through this before though and that’s why today will be a day to be cautious.  Last month we also had a pop around the Fed announcement and gave it all back the day after.

Let’s talk about the 5 things you need to know about this historic increase in interest rates.

What is the Fed Doing?

In an effort to combat out-of-control inflation, the Fed is increasing interest rates to slow down the growth of the economy.  The trick is to do so without causing a recession.  They’re attempting to find a “soft landing” and have this be a blip in the timeline of the post-pandemic market.

The last couple of days have been difficult, with the markets dropping  6%, and the consumer sentiment index, published by the University of Michigan, just hit an all-time low (blue line in the chart below).  Consumers are losing hope in this economy and most believe a recession in inevitable. 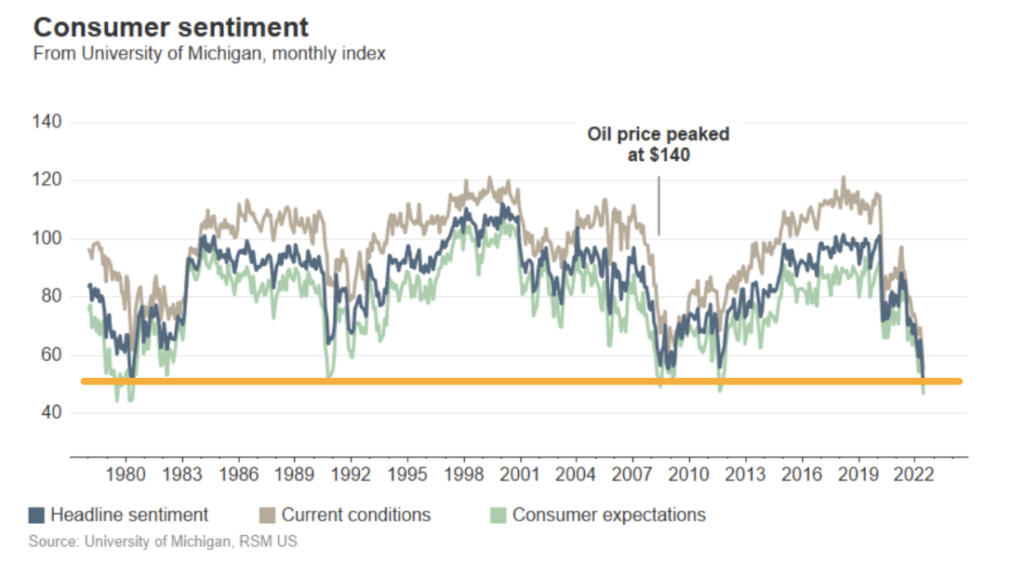 The Fed reacted today with an aggressive .75% increase.  The last time anyone increased rates by .75% was 1994, during a similar period of growth.  The difference is in 1994 they were trying to stop inflation from happening.  Today we’re trying to catch up and reduce inflation.

What Is The Goal?

The price of goods and services is too high and global demand is slowing.  The economy is still strong and unemployment is low, so the goal here is to raise interest rates to further slow down demand, increasing supply levels, which would ultimately lower the cost of goods.  They just need to do so without stalling the economy completely.  By raising rates on long-term loans like cars and houses, the Fed risks weakening the economy for years to come.

What Will the Fed Do Next?

The Fed wants interest rates to be around 3.5% by December 2022.  That means we have several more rate hikes to go by the end of the year, but the rate of the hikes will largely depend on how the Consumer Price Index and other key numbers come out.  If we see prices stabilizing or going down, the rate and extent of each hike may be smaller.  The larger-than-anticipated hike today was due to last week’s report showing that inflation was accelerating once again.

Mortgage rates have been on the rise and the higher the interest rates go, the fewer people that can afford homes and the fewer businesses can invest in their future.  Overall this will mean the economy will shrink from current levels, and it could mean layoffs, hiring freezes, etc. in the job market. With unemployment at near-record lows, the Fed is counting that the job market can sustain a little slowdown.

Consumers will spend less on discretionary spending and will focus more on necessary items.  This is why you usually see Consumer Defensive/Staples, like Kroger (KR), Costco (COST), Walmart (WMT), Procter & Gamble (PG), and others gain value, while stocks like Best Buy (BBY), Estee Lauder (EL), for example, struggle in comparison.

What Happened in 1994 and What Does That Mean Now?

The last time the Fed raised rates by .75% was 1994, but that was a different scenario.  The Fed anticipated inflation and raised rates to get in front of the issue.  The year finished slightly negative, falling 1.2% and the Fed avoided a recession and the following year stocks rebounded by 34%.  With 6 months to go this year, will we be so lucky to climb out of the 22% hole we’re in and see wonderful gains next year?

Yesterday’s Zoom (ZM) trade idea was helped along by an overall positive market, but it finished up today by 5.68%.  Want to know the stock I’m looking at next?

Today’s trade idea is a bearish trade on AMN Healthcare Services (AMN).  The chart peaked and made a new 10-day high yesterday, but not only did it close below the open, but it also lost on a day when the market was up.  Yes, I know it was technically up 2.62% yesterday, but that’s the difference from the previous day’s close.  It lost value from yesterday’s open to yesterday’s close.  It finished in the lower range of the day and after a gap up, I’m looking to see if this stock can fill the gap on the way down, meaning, fall back down to about $101, which was the high of the candle before the gap up.

Like I’ve been saying for days now, you need to be careful with the heightened volatility in the market.  If investors are overly excited about the rate hike, this stock could go up with the market.  But if the market sheds off the gains from yesterday, a bearish position in this stock might work out.