All Eyes On Energy

I hope everyone enjoyed a day away from thinking about the markets.  Especially now, it’s important to step away and clear your head and get prepared for whatever the market throws our way next.

Let’s start off by getting ready for the week ahead.

Tuesday – 3 PM  EST – The most important event you need to know about this week is happening at the Synergy Trader’s conference today at 3 PM.  Check out the bottom of this article and I’ll tell you why Traders Reserve was invited to give a live presentation and I’ll share a link you can use to join this special event.

April’s existing-home sales slid more than expected and the consensus is that May’s numbers will show a further decline from 5.61 million homes in April to 5.4 million in May.  With rising interest rates and low inventory levels, we’re starting to see the red-hot housing market cool off some.

Jobless claims are expected to be better than the previous week, but with no significant move.  This report could shake the markets if we get a number that is worse than expected.  We may get a surprise one week as more and more tech companies announce hiring freezes and/or layoffs as they anticipate a global slowdown of demand, but for now, we still have millions of unfilled jobs and unemployment is still quite low.

We’ve mentioned Energy stocks for a while now.  It was the only green sector in a sea of red, but there may be a change coming.  Let’s look at the relative performance charts for 3 months and 6 months. 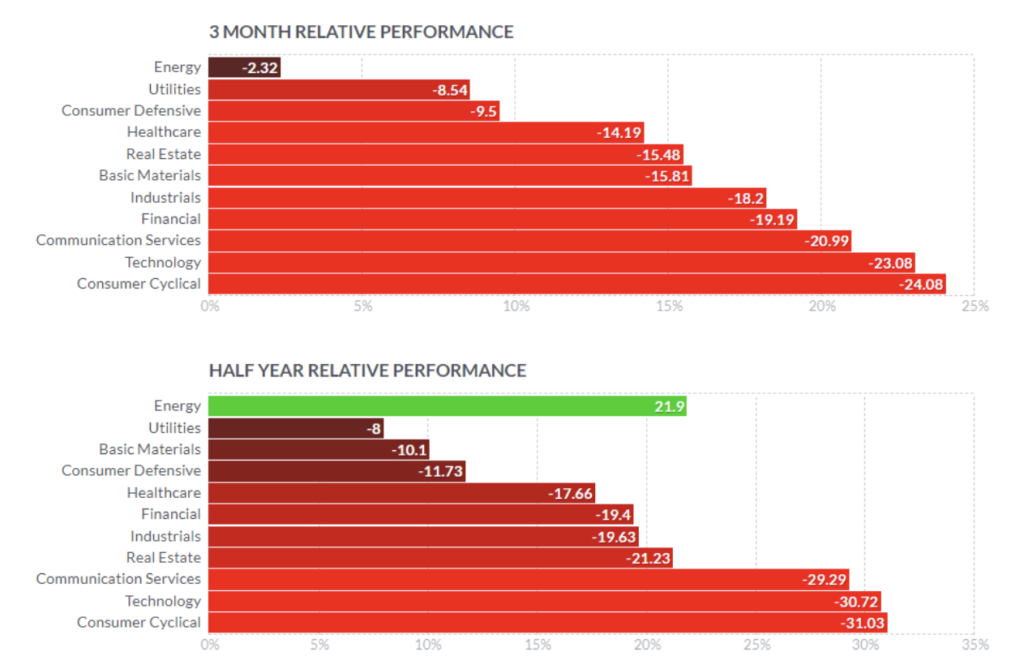 It wasn’t that long ago that Energy was the only green sector on the 3-month graph as well, but it’s now pulling back for multiple reasons.  In fact, last week Energy was the biggest loser of the sectors.

Why? With gas prices out of control and war still raging overseas, how could Energy be going down?  Part is profit-taking and the other part is new evaluations of a global recession.  If several of the major countries around the world slow down at the same time, the demand for oil and energy will slow as well.  People will do what is necessary to save on fuel, whether it be fewer trips to the store, less travel, or even changing vehicles to something more fuel-efficient.

The US also said it will continue to expand its oil production next month as it looks to fight against record-high prices at the pump.

Exxon Mobil (XOM) and Devon Energy (DVN) are both up over 30% on the year while the SP500 is down close to 25%, so this may be a signal that says it’s time for this sector start to balance out.

Going back to the financial crisis of 2008, we saw oil prices continue to rise as the market fell, but eventually, like a rubber band, supply and demand need to snap back into balance.  In the 2008 recession, we saw the Energy sector come crashing down before we achieved a market bottom.  I’m not saying this dip in Energy is that moment, but that is one indicator I’ll be watching.

Before you start shorting the Energy market, let’s take a look at some charts.

The Energy sector fell sharply last week and several of its stocks broke through some long-term up trends.  Now I need to see a retest of the lower-trend (blue) line and see a bounce down before I’d look at shorting Energy stocks.  I want to see that line now act as resistance before the next leg down.

And here’s a chart of Devon Energy (DVN).  The green line is the 50-day moving average and the orange line is the 200-day moving average.  We may see DVN go down and test the 200 before turning around, but I would like to see it come back up to the 50-day and see that the 50-day starts acting as resistance.  That would be my first indication that Energy could start moving down over the next couple of months.  A cross below the 200-day will be even better.

With the Energy stocks beaten up so much last week, I wouldn’t be surprised if we see a little bump back up this week.

I have an idea for an Energy trade.  And I also promised you a link to a special event, happening TODAY!  You have to keep reading…

Valero Energy (VLO) has been one of the best-performing stocks over the last 6 months, but that also means it has further to fall should the Energy sector continue to slip.

VLO has yet to reach its lower channel (light blue line), which is roughly $6 away, around $106.  Even if Energy does come back up this week, I think VLO is still headed to test that line of support.

At the time of this writing, the market is closed and may be giving off some incorrect option pricing, so you’d have to review this again once the market is open to make sure you still have a good risk/reward ratio.

A Bear Put Diagonal Spread is similar to a Bear Put Calendar Spread, but we set this option spread with different strike prices.

The risk profile looks like this.  It gives us plenty of room for the stock to go up but is skewed more to the downside.

Ok, before I go for the day, I promised a link that would get you into the special Synergy Traders event, happening TODAY!  When they found out about what we were doing at Traders Reserve, they said we had to go to their event and tell people all about it.

We’ve tried to keep the results for our beta group of the 5K Challenge under wraps, but when you receive quadruple digits per week, the word gets out…

There are whispers around the industry of what we’re doing, and there has been some disbelief.  So when we said we can PROVE IT, the hosts of the upcoming Synergy Traders Event said we had to join the lineup.