Are The Bears Coming Back? 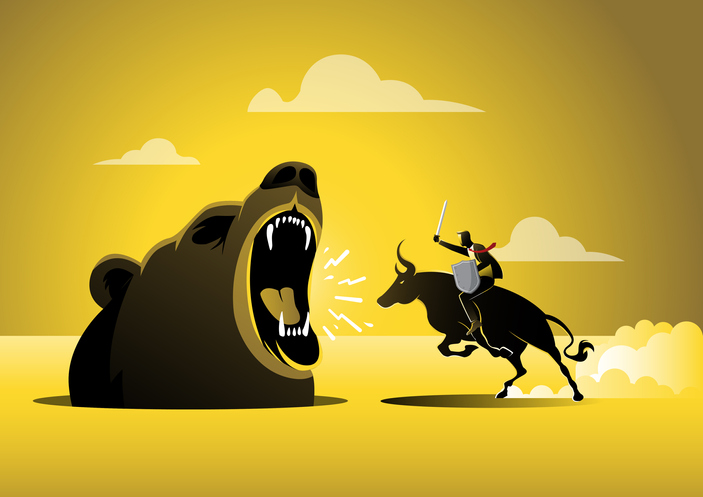 Heading into a historically positive time in the market, and coming after midterms where it’s looking more like Congress will be split, it’s not surprising that the market put in a rally and is looking for more room to the upside.

In fact, all three major indices are sitting above their 50-day moving averages now. The DIA ETF, representing the Dow Industrials is now above a long-term downtrend line and is sitting less than 10% from all-time highs. 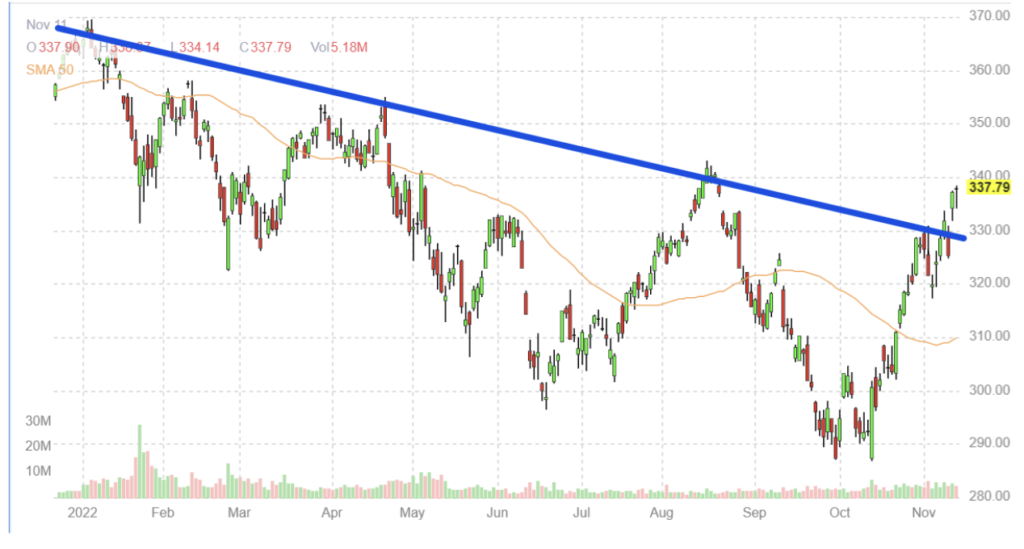 The SPY ETF, represents the S&P 500 and is coming up against its long-term downtrend line, but solidly above its 50-day moving average. 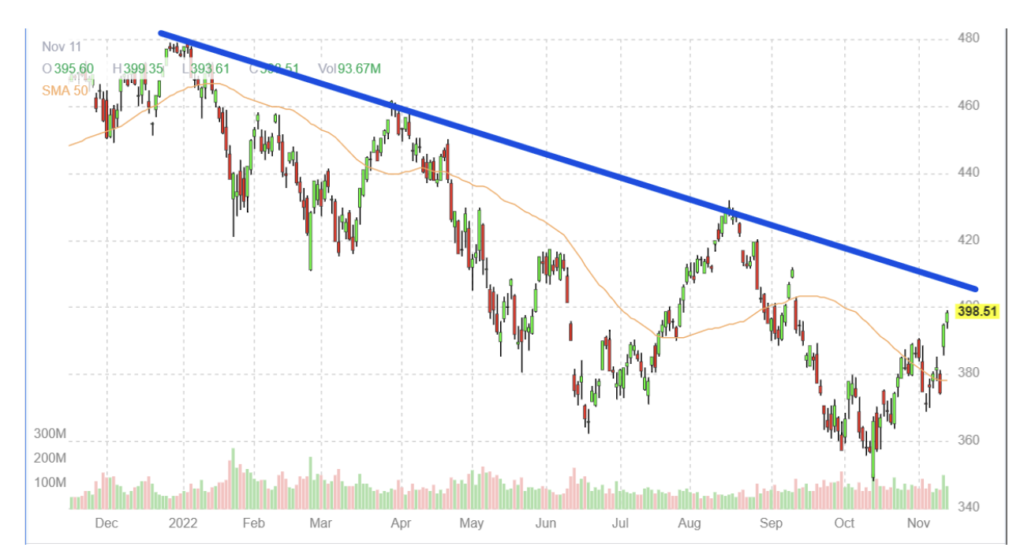 And finally, the QQQ, which represents the Nasdaq.  It looks similar to the SPY, now above its 50-day, but coming up to resistance. 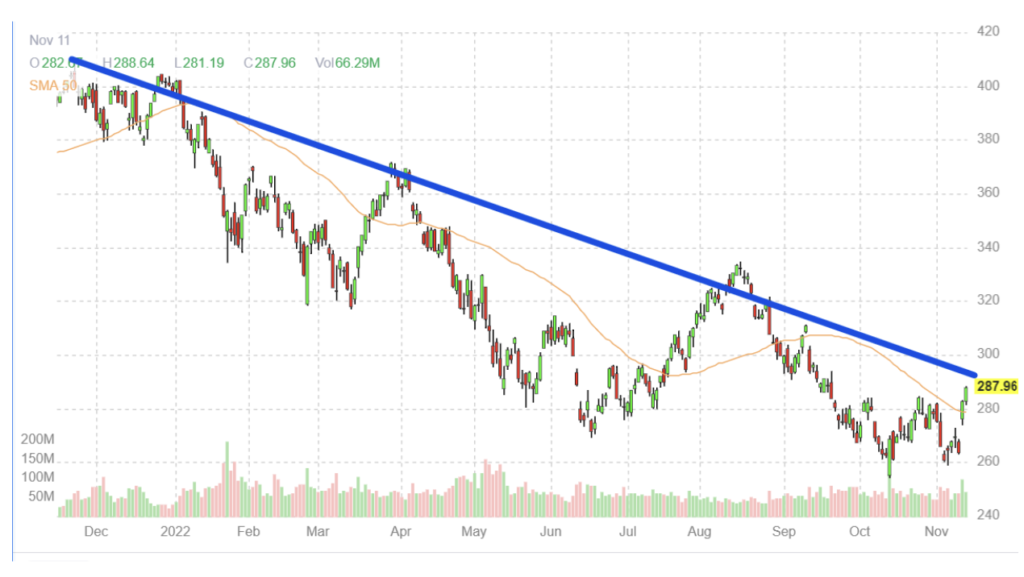 Is this another case of a bear market rally? The Fed’s target rate for inflation is 2%. They reinforced their stance a week ago, saying they are in a long-term battle with inflation and there will be pain before gain.

So why did the market pop at the end of last week? Because the Consumer Price Index rose 7.7% year-over-year and we should be rejoicing about that? Sure, it was the lowest year-over-year gain since January, but now people are estimating that the Fed will reduce their future rate hikes. The rate hikes aren’t over though.

Remember, they also said their goal is to weaken the economy in order to lower demand. We’re certainly starting to see that happen more and more within the tech sector. Each week brings more stories of layoffs at some of the world’s largest tech companies.

I could be wrong and maybe the bottom was formed in mid-October, but nothing from the Fed from last week has changed. The battle to get inflation to 2% still has a long way to go. We still have reduced liquidity in the market from quantitative tightening as well as projected lower corporate earnings ahead.

In the near term, bonds are pricing in a lower terminal Fed Funds rate – the rate at which the Fed will stop hiking interest rates. This means investors are hoping or counting on the Fed pivoting away from what they said they will continue to do. That’s fine in the near term, but the long term trend is still bearish. My guess is that the bears will be back, but we can enjoy the rally while it lasts.

Ok, let’s get to a potential trade idea as well as the reports that may impact trading this week.

First, the trade idea. Five9, Inc (FIVN) just got through earnings a few days ago, and to me, it looks like a classic fake-out, shake-out, break-out setup. The stock sank the week prior to earnings, the ‘E’ in the chart below. 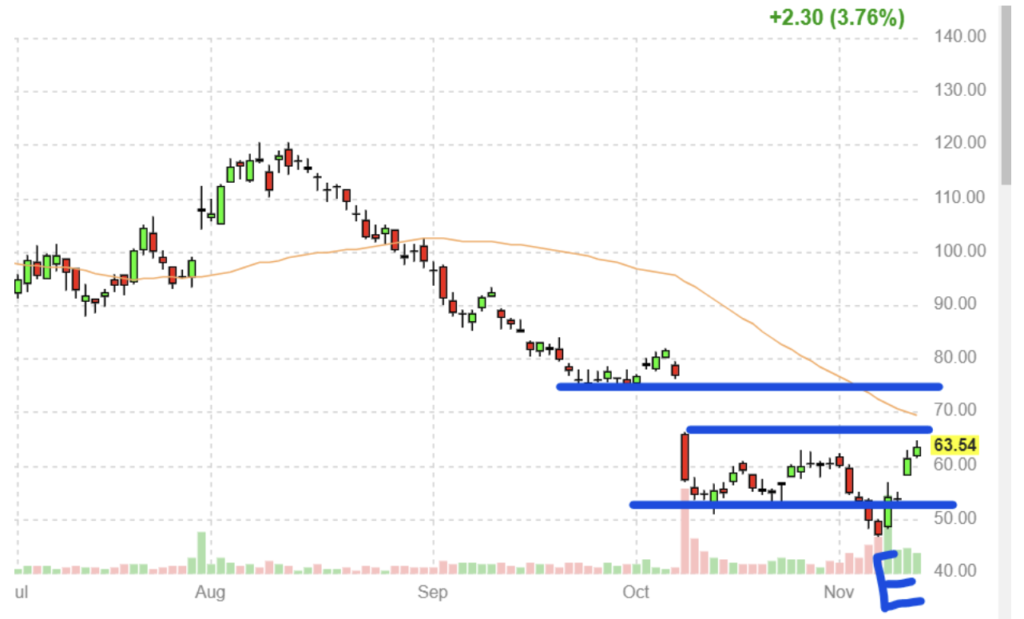 They took the stock under a line of support. Stop losses trigger and it’s a fake break to the downside, shaking out the traders. Then after earnings, the heavy volume comes pouring in and now I’m waiting to see if we get a breakout to the upside. The stock is trading at $63 and the 20 January 23 $60 call is trading for $8.70. You can be patient and see if we get that breakout first.

Ok, here are the reports that are most likely to affect the markets this week. Keep in mind there will be several speeches from the various members of the Fed throughout the week.

Wednesday 8:30 am EST – Retail Sales – Sales have been flat but we could see an unexpected jump higher by 1% from last month. However, if you exclude vehicles and gas from the number, the gain is much narrower at a 0.2% gain from last month.

Wednesday 9:15 am EST – Industrial Production – The market is expecting a slower gain than the previous month. Industrial production and Manufacturing Output are only expected to each grow by 0.2% vs the 0.4% last month.

Thursday 8:30 am EST – Housing Starts and Permits – Starts and Permits are both supposed to head lower again this month. Home building stocks usually have a strong showing in the 4th quarter, but this year could throw off their usual performance.

Thursday 8:30 am EST – Jobless Claims – Claims are expected to come down slightly from last week to 222k, but news outlets would make us believe it will come in higher than expected based on all the stories of tech companies consolidating their workforce.

Thursday 8:30 am EST – Philadelphia Fed Manufacturing Index – The report is expected to show contraction, which would be the fourth time in the last five reports. However, the number is expected to tick higher from -8.7 to -7.0 this month.

Friday 10:00 am EST – Existing Home Sales – Home sales have contracted for the past eight months in a row and are expected to contract further.

That’s it. I’ll see you back here tomorrow.