Fear Of Missing Out On The Start Of A Bull Market

The PMI Composite Flash report came out yesterday and there was a surprising uptick in the Manufacturing Index, showing a reading of 46.8 vs. the 46.2 reading from last month’s report.  Anything less than 50 shows that manufacturing is in a state of contraction, but it was yet another sign that things may not be as bad as once thought.  Don’t get me wrong – we still have a long way to go.

This earnings season continues to move the market higher and now that we’re saddled along the 200-day moving average, stocks are breaking out with investors being drawn in by a fear of missing out on the start of a bull market.

If we zoom into an hourly chart though, we can see that the price action is hovering right at that trend line, but it is staying higher.  Some take that as a sign this market will take off higher. 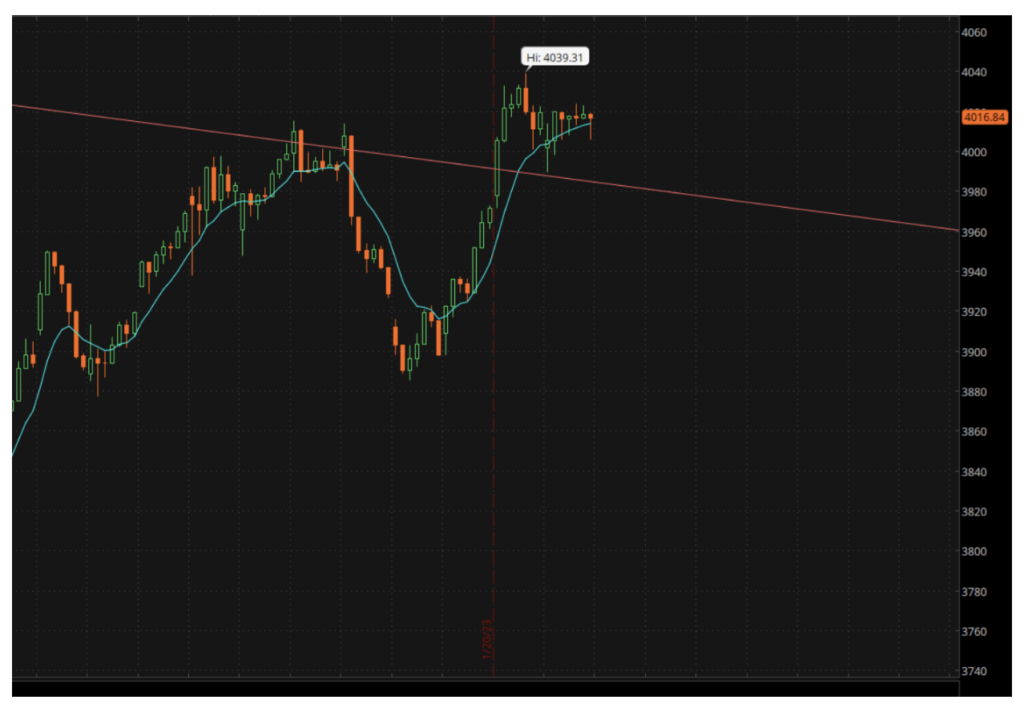 I’ll be the first to admit it if I’m wrong and the bulls come out roaring. If I look at my trading, I certainly do better in prolonged bull markets. I would love for another bull market to emerge this week or next, but I need to look at the facts.

While the Fed is likely to announce a 0.25% basis point increase next week, I am not going to forget what the Fed said months ago when they said they want to see higher rates for longer.

Slowing down the rate hikes is not the same as a pivot and it’s not the same as saying inflation is now at 2% and everything is ok. After a series of higher-than-normal hikes, it seems as though this is a pivot, but it’s not.

The market may treat it as such and we may see continued positive momentum from earnings, but I’m still expecting to see a drop after the Fed meeting, if not earlier.

In the meantime, the Department of Justice is going after Alphabet (GOOGL) for allegedly breaking antitrust laws with its ad business. I am far more concerned about ChatGPT taking part in Google’s search business than I am about a DOJ lawsuit. Remember what happened to Microsoft (MSFT) after being sued for having a monopoly in the personal computer market? That’s right, essentially nothing. It certainly didn’t stop Microsoft from the tech giant it is today.

If anything, breaking up Alphabet into separate divisions could increase profitability and would likely help move the stock price higher.

Today’s trade is coming to you a little early because ServiceNow (NOW) has earnings after the bell today. Those who are willing to accept the risk can try to place a trade beforehand, but I’ll wait until Thursday morning.

ServiceNow has a 90% historical track record of going higher over the next four weeks by an average of 9.32%. There’s no doubt that consistently beating earnings have helped boost those numbers, but the earnings drift tends to continue for weeks afterward. Meaning, you may not see the full average of 9.32% gain if you wait until after earnings to place a trade, but the stock doesn’t immediately fall either. It continues to drift higher for a few weeks.

As it stands, the trade would cost me $2445 for one contract – I know, it’s more than I usually talk about. However, a 9% move in the underlying would result in a potential $2,000 gain if it happened by February 18th.

If it’s too expensive, you can sell an option that is closer to the money, but your net delta will be less. Remember, the delta represents how much the option will move with every $1 in the underlying price.

If you’re interested in selling options for income, you can go out to the 17 MAR expiration and sell the $400/$390 put spread for $4.20 right now. That’s a 42% return on the width of the spread. This number will dramatically change after earnings though. If you’re waiting, look to sell the 30 delta option and buy $5 or $10 under. Make sure you’re getting a potential return of about 25%.