Two Adventurous Traders Attempt To Prove They Can Make $5,000 Per Week Trading Options

Each week we're talk about what we see happening in the week ahead, and how you can plan to trade around it.

The thing I’ve learned from this earnings season is that a company can have consecutive quarterly drops in revenue and provide a lower forecast for revenue, but still be rewarded during an earnings announcement if they mention a few key phrases.

The first phrase the market wants to hear involves preparing for a recession and cutting the labor force. This should increase profits and raise share prices, but keep reading to see just how much Alphabet (GOOG) is going to spend to cut jobs. We’ve seen countless companies be rewarded for slashing their workforce and I expect that to continue.

Look at what happened to FedEx (FDX). They plan to get their global workforce back by 10% and the stock rallied over 6%. And yes, that was my counter-trend trade from yesterday. I did mention that it was an aggressive trade and I was looking at it from a charting perspective, but I will admit that I was on the wrong side of that one. I’m not sure I’m buying into the move on lower volume though. 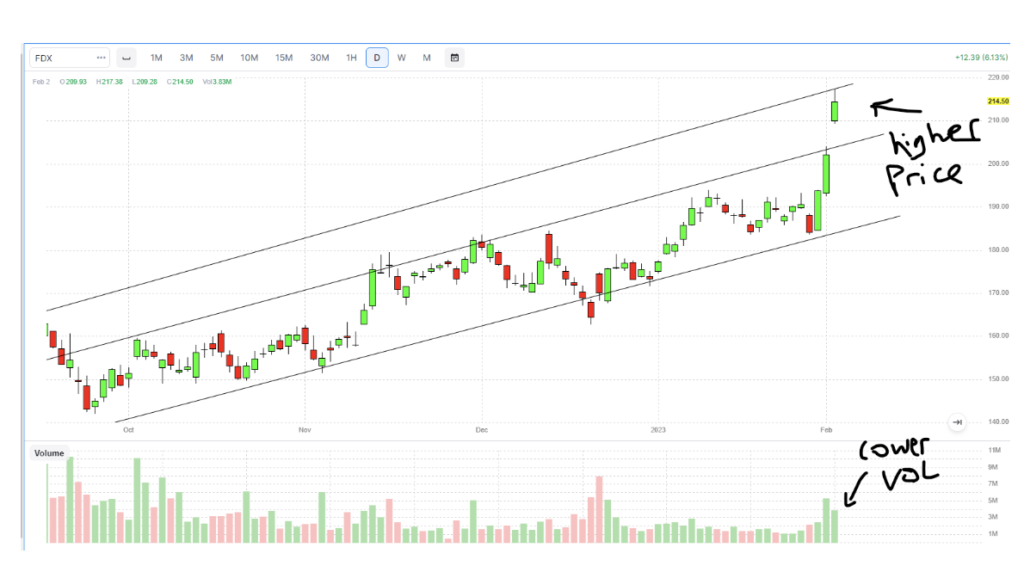 The second winning phrase in 2023 involves companies announcing stock buybacks. How else do you provide value to the shareholders if you just mentioned falling revenue and a lower outlook?

Meta (META) announced a $40 million stock buyback and investors forgot about the $13.7 billion in losses the company spent on Reality Labs to build the Metaverse. META surged 23% in a day on the news and had its best trading day since 2013.

Just keep in mind that they reported an increase in costs by 22% and the good news was they lost LESS than anticipated due to competition from TikTok. Costs went up and they didn’t lose as much as they thought from the competition and here we are at a 23% gain in a day. I’m just upset because I’m trying to be more bullish, but no one told me to get into Meta before this move.

As I write this, Apple (AAPL) and Alphabet (GOOG) are trading lower after their respective earnings announcements. It doesn’t look like either of them said the magic phrases and they announced job cuts too soon.

By the way, Alphabet is planning on spending between $1.9 and 2.3 billion dollars in employee severance and related charges. At that point is it really cheaper to fire people instead of putting them to work against ChatGPT and Microsoft (MSFT)?

Spoiler Alert – I don’t have a trade today because I want to focus on a repair tactic for a trade I’m currently in and trying to recover from.

I have been watching the Vanguard Value ETF (VTV) and I thought it was hitting resistance and would be headed lower. It hit resistance and started to move lower before the market forgot how to have a down day.

I have a calendar spread, meaning I sold a short-dated option and purchased a long-dated option at the same strike price. My position is CALENDAR VTV 100 17 MAR 23/17 FEB 23 142 PUT.

The ETF didn’t go down as expected and volatility didn’t go up as expected either. Time decay isn’t decaying and now I’m left with a decision on the underlying is near the breakeven point. 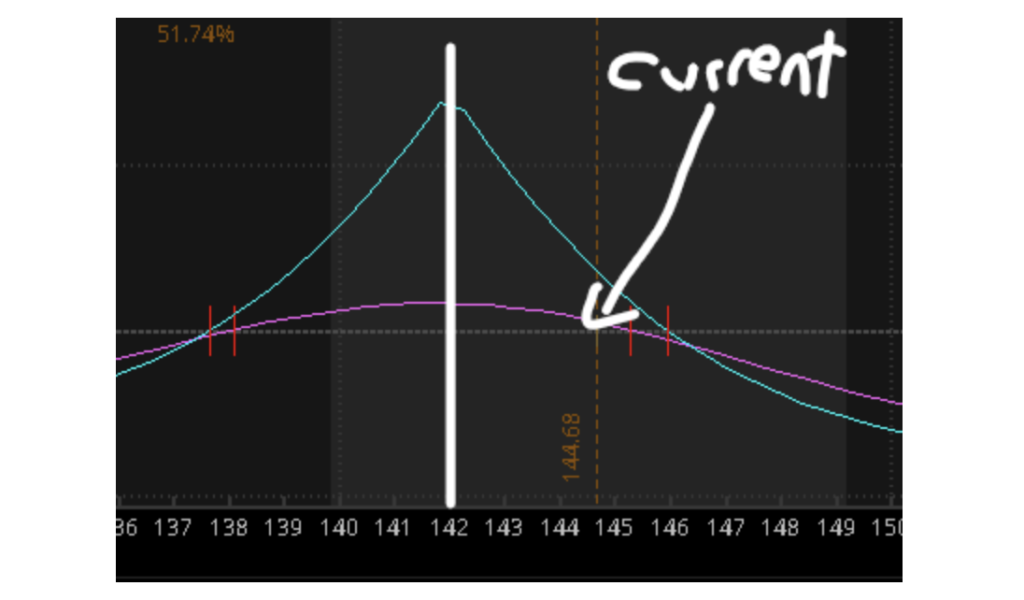 Let’s see what happens if we create a double-calendar spread. A double-what?

First, we need to go back to the chart and look at a possible resistance level. The December high was around $147 and let’s assume that the ETF might stall out around there. 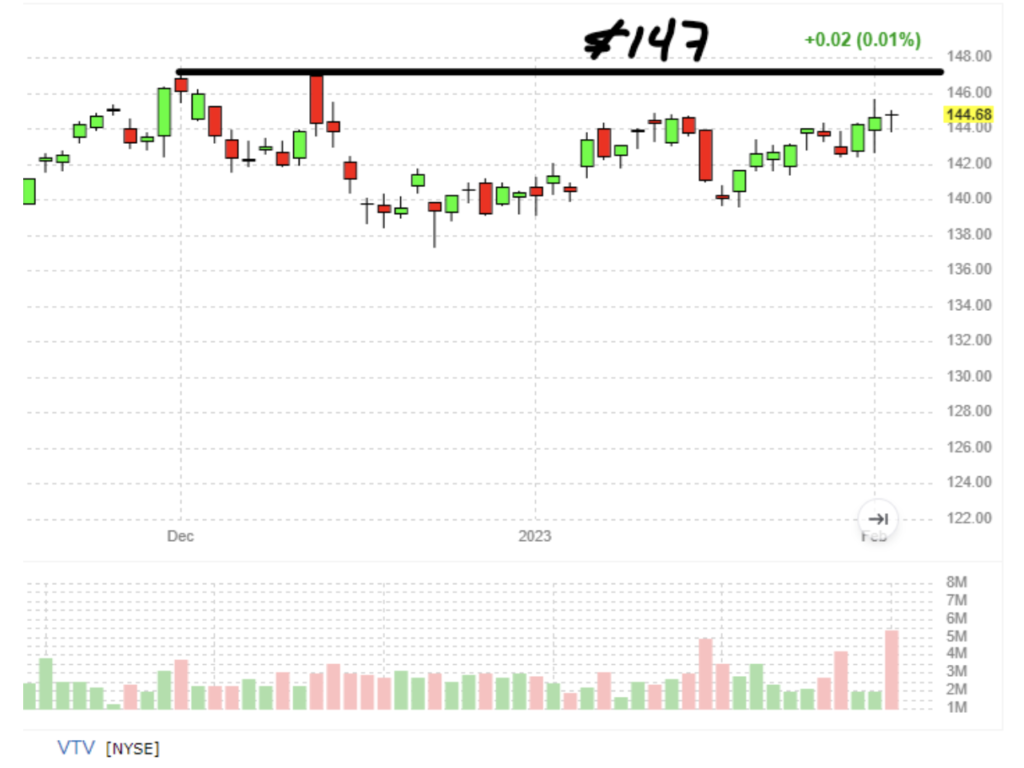 Let’s go back and add another calendar spread to our existing position. This new trade is a debit and will require me to use additional funds.
BUY CALENDAR VTV 100 17 MAR 23/17 FEB 23 147 PUT @.75 LMT MARK

By putting the peak of the trade at the expected resistance level, we are giving ourselves even more room for the upside to be wrong. 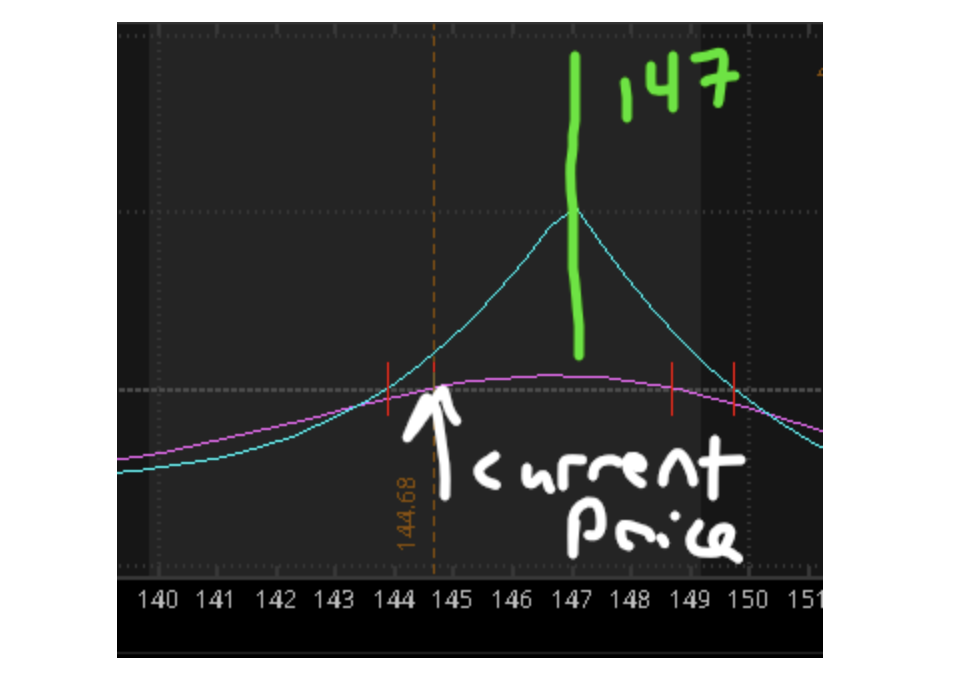 But what happens if the ETF comes back down?  Well, remember, I still have the other position.  So let’s add both positions to the risk graph. 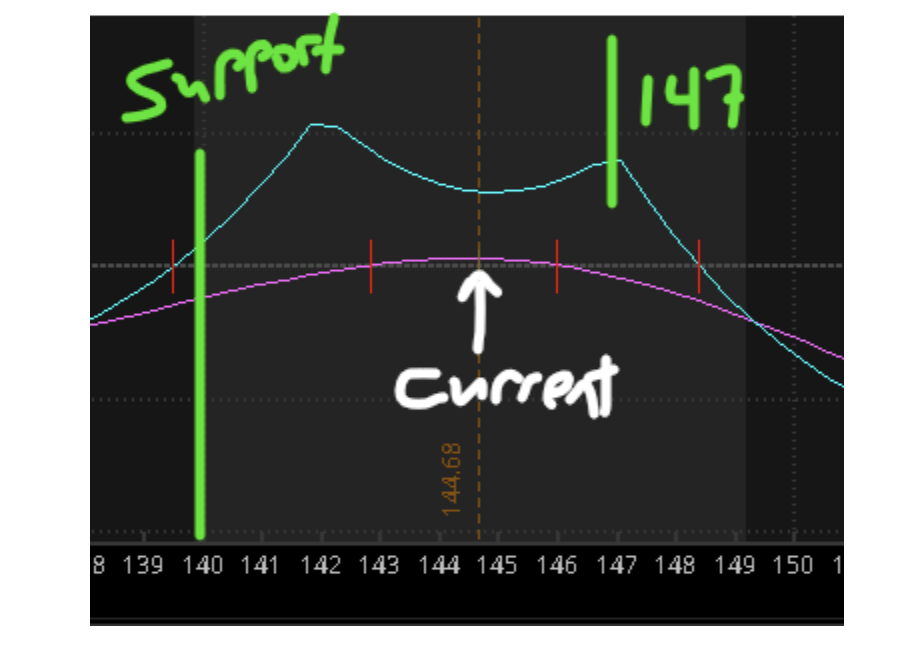 If I go back to the stock chart, I can see support around $140. I’ve identified resistance around $147 and now I’ve created a position that can be profitable as long as the ETF stays above $139.50 and below $148.40 by the February expiration date.

Since I bought options in March, I can always roll the February options for the potential to bring in more credit if further repairs are needed.

I hope you have a fantastic weekend!

Any trade or trade idea discussed is for educational purposes only.  They will not be tracked as an official trade recommendation.