Investors Are Fleeing From These ETF Giants 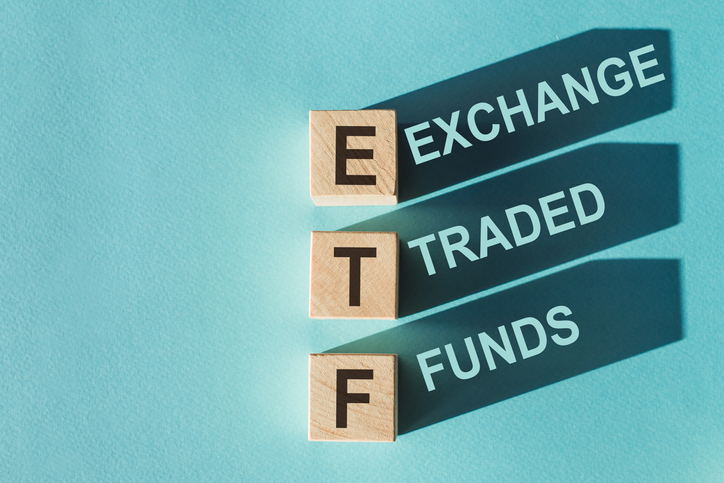 It was a week ago that the Dow 30 rose over 700 points after Powell spoke and gave hope that interest rate hikes were going to go down to 50 basis points instead of 75.

Fast forward a week and all of those gains have been nearly erased.

Just as the market was rejoicing last week, investors were pulling out over $10 billion from the two mega ETFs, SPY and QQQ. 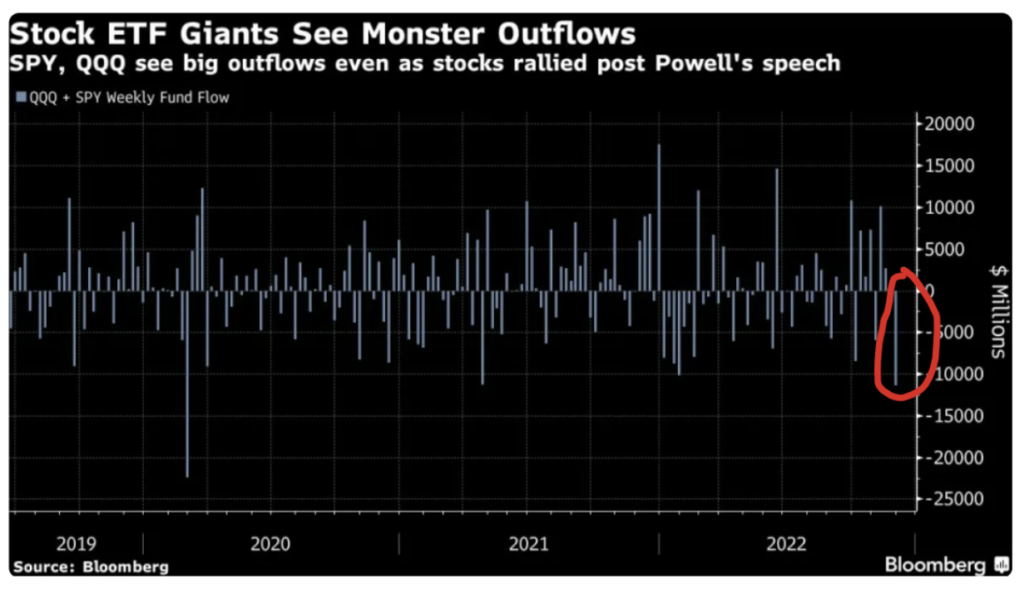 That doesn’t necessarily mean anything other than investors took the opportunity to close out of positions as the market rallied to an 11-week high. But that hasn’t been helping the market this week as we’ve been on a steady decline ever since.

I can’t wait until we get to a spot where we can stop attributing market direction to the Fed, but the reality is some people may be waiting until the final Fed meeting of the year on December 13th and 14th before making any further moves.

While we may see another moment of rejoicing after their meeting, the real question is when the Fed will announce they need to increase the terminal rate – the rate at which they will stop with rate hikes. If inflation, or even stagflation, isn’t under control in the early part of the year, the Fed will need to come out and say they will continue with rate hikes, and I’m not sure the market is prepared for that announcement.

The bottom may not be in yet. I’ll show you a chart that may back that up.

If we go back to April, you can see after the big move down, there was an upward retracement, before falling again. That third leg of this move fell down to the 78.6% Fibonacci extension level. 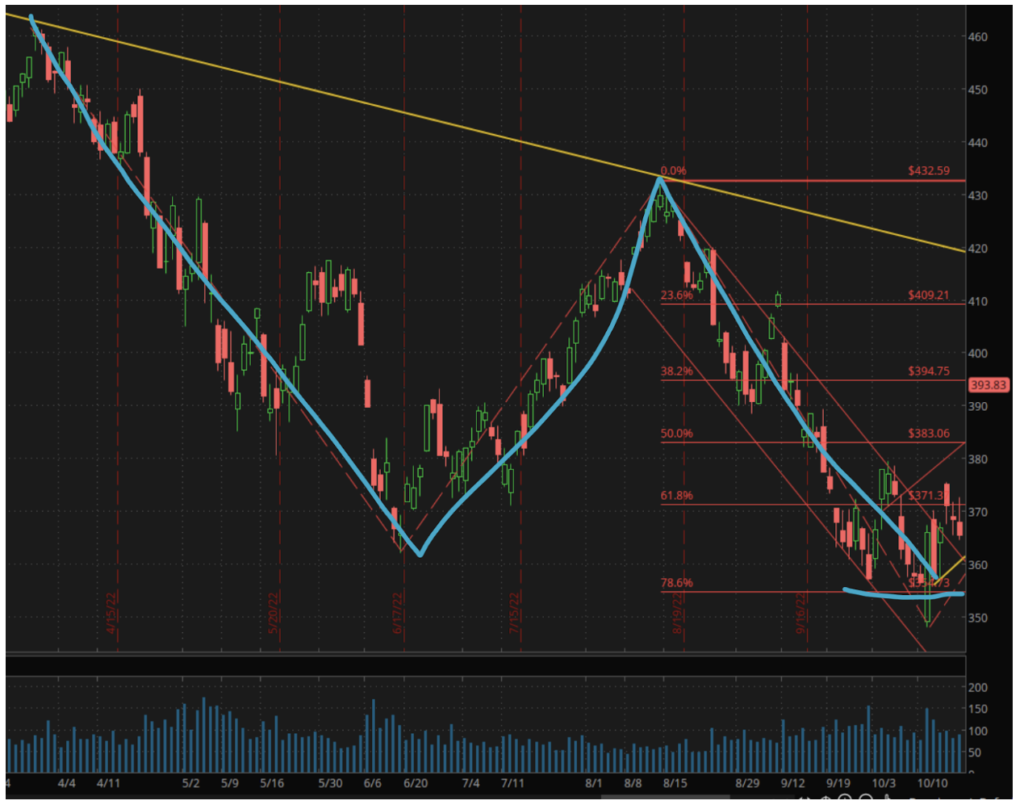 Now, we have a similar pattern forming, albeit the move down wasn’t as extreme and didn’t last as long as April. The market hit a long-term resistance level, and fell. Then there were about two months for a retracement back up to the resistance level and here we are. 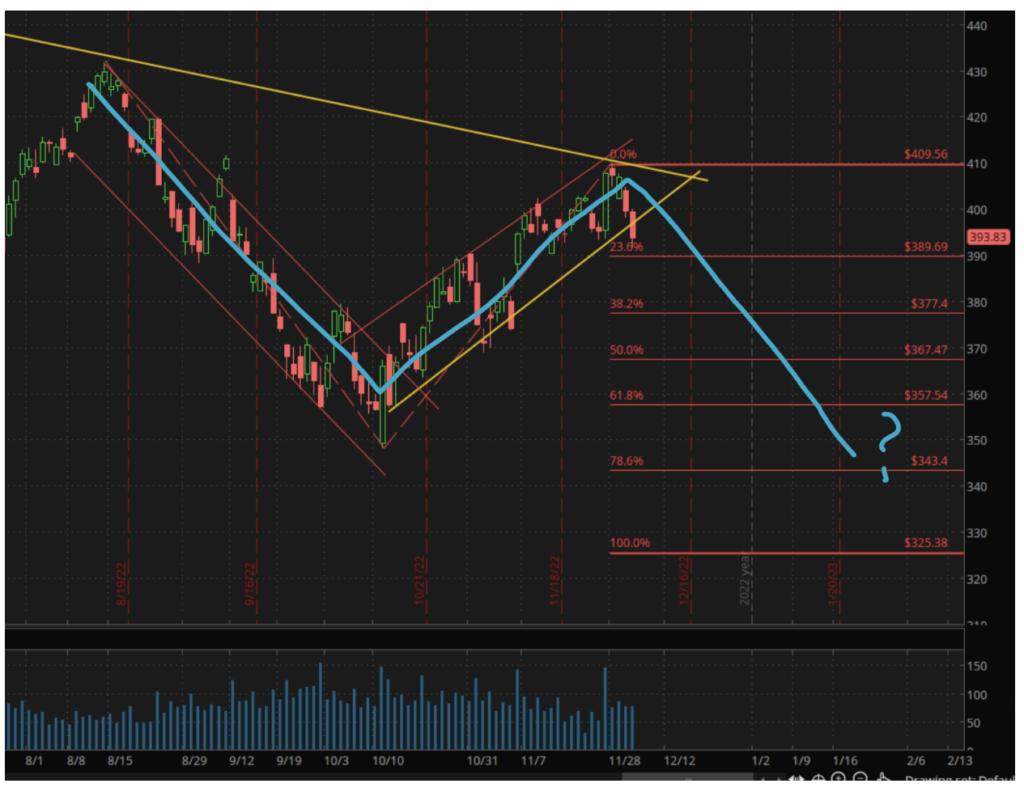 If the market is going to break down from here and really head down to $343 (on the SPY), and the last time this pattern formed, the market went down for three months, we can go out to April 2023 and sell a call credit spread.

Looking at the chart above, it doesn’t seem like SPY is headed above $420 anytime soon, so let’s see what spread we can create.

You can also use the red lines on the chart as potential pivot points. If the market changes direction at any of those levels, you can always get out of the call credit spread and get into a put credit spread.

PrevPreviousThe Option Technique You Should Know Before The Market Breaks Again
NextIs This The End Of A Tech Giant?Next