Before we talk about two tech giants getting ready to battle it out once again, let’s look at the overall market.

The market continues to ignore the Fed’s rate guidance, despite it being published less than a month ago. Some of the Fed’s officials have mentioned this week that rates are likely to go somewhere above 5% before any consideration of rate cuts.

JPMorgan’s (JPM) CEO predicted rates could reach 6% later this year. Yet, the market continues to climb higher in anticipation of the CPI report, which will be released by the time you read this.

The problem is the Fed has been quite clear about where they want to go with rates, so trading based on hoping the Fed will change their mind doesn’t make sense to me.

That said, the market has taken off from a recent period of consolidation. I highlighted some other recent big moves that occurred in 6-7 days. If this time follows the other times, we have about three days left of this move with a potential for the SPX to rise up to 4050. Look at that – 4050 is a point of previous resistance too. 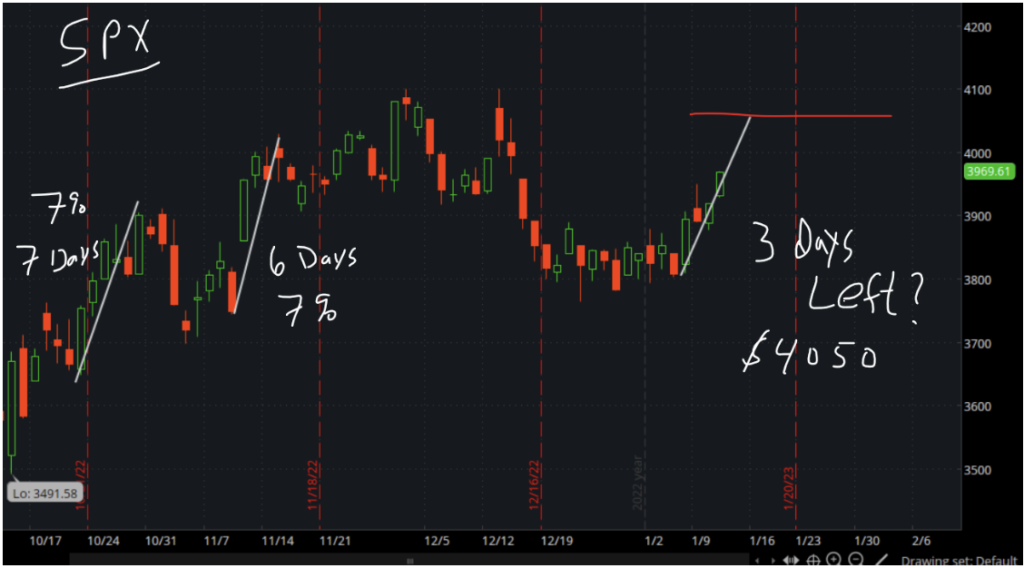 Today’s trade idea is going to be more of a story than a specific trade. I wrote about ChatGPT a few days ago. It’s an artificial intelligence chat tool, created by OpenAI. You may have seen stories about the end of Google. This tool has only been available to the public since December 2022 and it already has the executives at Alphabet (GOOGL) going into defense mode.

The answers the chatbot gives are so natural that people have a hard time discerning if the answer came from a piece of code or a person.

Think about the impact that has on students who spend hours researching topics to write essays. It’s essentially the same as when the calculator was introduced. Why learn how to add or subtract when you can push buttons on your phone or keyboard? How many are still doing long division on paper?

Will there be a need to research if you can ask a chatbot to explain a topic and it can research, decipher, and write back to you in seconds?

Yes, some college professors have been fooled when they received essays from artificial intelligence, like ChatGPT. That means universities across the globe will soon need to rethink the usefulness of their offerings.

How many times have you asked a question and have been told, “google it…” as an answer? Well, instead of googling it and getting a list of websites, rearranged and promoted based on paid searches, what if you now have one place to go and get artificial intelligence to speak (or write) to you as another person would? No more internet searches! That also means no more ads!

So it is no surprise that Microsoft (MSFT) is in talks with OpenAI to invest $10 billion dollars. That will help raise the value of OpenAI to an estimated $29 billion.

OpenAI is expecting $200 million in revenue next year and $1 billion by 2024, and Microsoft is looking for 75% of OpenAI’s profits until it recoups its initial investment.

With Microsoft’s internet search engine, Bing, being worthless … ok, it’s not worthless, but it barely shows up on the chart of search engines handling global searches… It’s not surprising that Microsoft is jumping all over this as a way to get back into competition with the market leader, Alphabet (GOOGL).

Here’s a weekly chart of Microsoft and it has a long history of going higher, through all the ups and downs over the years. Take the opportunity to get into Microsoft on the prolonged dip and watch two tech giants battle for internet search supremacy.