Is It Time To Get Defensive Again?

Markets retreated from Tuesday’s high as economic data reported later in the week was mixed.  I think what we saw last week was the start of a healthy pullback, a monthly expiration, and more professionals returning from their vacations in the Hamptons, or wherever they go.

Last week some members of the Fed suggested the economic data was still too strong and further rate hikes would be needed if they were going to get inflation down to 2%.  This, of course, hurts most growth stocks and puts an emphasis back on value stocks.

The chart below shows the percentage of stocks in the S&P 500 sectors above moving averages from various timeframes.  Consumer Staples, Energy, and Utilities are the only three sectors where more than 50% of the companies are over their 5-day average.  That shows a return to the defensive sectors.

Now look at all of the sectors and compare the percentage of companies above their 50-day average and their 200-day average.  With the last few weeks of upward movement, we saw several companies go into a bullish intermediate trend (above 50-day), but this latest push-up was not enough to get companies above their long-term averages (200-day).  That doesn’t bode well for the bull’s case. At least not for now.

Now, let’s take a glance and the reports coming out this week that are most likely to move the markets.

Before we look at the reports of the week, let me show you one other chart that might make you get defensive for the next couple of weeks.

I’ve written about the $BPNYA = the percentage of companies in the NYSE on a point-and-figure chart buy signal.  The ticker represents a percentage, so it only goes from 0 –  100.  In the chart below I’ve included the $BPNYA on top and the S&P 500 ETF, SPY, below.

What you can see is that as the percentage of stocks on a buy signal reaches 60% and then starts to turn lower, it coincides with a peak in the S&P 500.  I’ve drawn orange vertical lines showing this.  The blue horizontal lines are the two times when the $BPNYA was above 60%, started to go lower, and then turned back higher – an unusual event over the past year.  The BPNYA crossed over 60% and has been going lower ever since Tuesday, a bearish sign, indicating the market is likely to head lower for the next few weeks. 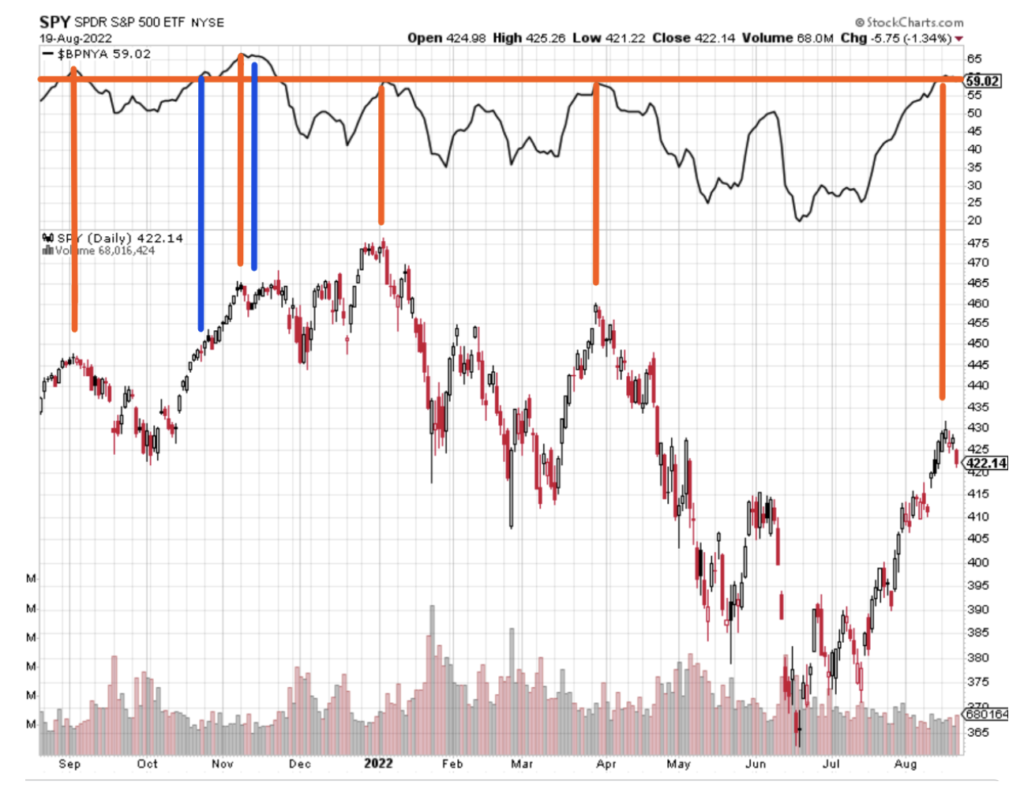 How much lower can we go?  The last two occurrences when the $BPNYA was near 60% occurred during the early part of the bear market of 2022, so the market went much lower than normal.  Let’s assume we don’t see a pullback that extreme.  If we keep going left on the chart, we see the normal pullback is about $25.  That means the SPY could be headed to $400 (the SPX going to 4000).  That would be a drop of about 5% from current levels.  I don’t know that we’ll go down that far and we may see some intermittent up days, but I’m eyeing that level by looking at the past performance and because of the psychological ties the market has with big, even numbers.

If we don’t immediately bounce higher today, here are the smaller levels of support on the SPX:
4225
4160
4050
4000
Ok, here are the reports for this week.  These reports have the strongest probability of moving the markets if they beat or fall short of their forecast.
Tuesday – Manufacturing PMI – Forecast of 51.9 vs the previous 52.2, but anything over 50 suggests the manufacturing sector is expanding.
Tuesday – New Home Sales – Forecast of 575k vs the previous 590k.  This shows the housing market continues to get worse and could ultimately be bearish for the U.S. economy.
Wednesday – Durable Goods Orders – Forecast of 0.2% vs previous 0.4%.  The total orders for long-lasting manufacturing goods are also expected to retreat from the previous month.
Thursday – GDP (Q2) – This report is the revised Q2 GDP numbers, but the forecast is still negative.  The revised number is projected to be -0.8% instead of the original -0.9%, but it won’t change the fact that Q2 was still the second consecutive quarter of negative GDP – the old, broader way to determine a recession.
Thursday – Jobless Claims – Forecast of 253k vs the 250k from the previous week.  My threshold is still 300k, otherwise, the number is just noise.
Friday – Core PCE Price Index – The year-over-year forecast is 4.7% vs the previous 4.8%, showing the core personal consumption expenditures may slightly decrease.  This means the price of goods and services purchased by consumers may be lower than a year ago, but not enough to make consumers feel good about the prices they are seeing at stores.
Michigan Consumer Sentiment – Forecast of 55.2 vs previous 55.1, indicating people only feel marginally better about the economy.
What do you think? Is it time to hedge your portfolio or are we going to the moon from here?
If you have any questions, comments, or anything we can help with, reach us at any time.
Email: [email protected]
Phone: (866) 257-3008