Is This Really A Recession?

The Mediots Are At It Again

As we’ve explained over the last few months, it was likely that the U.S. economy would meet the ‘technical’ definition of a recession (two or more consecutive quarters of negative GDP).

Here’s Fox News at 9:37am Thursday – one hour after the GDP report was released: 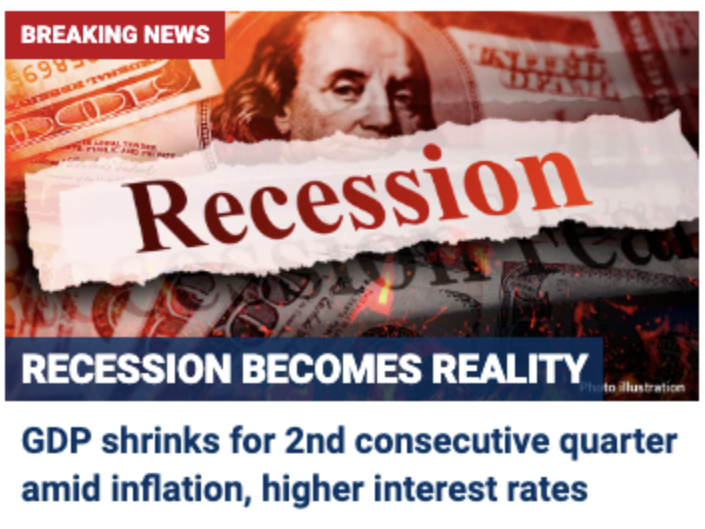 WE ARE NOT IN A RECESSION, YET!

Sorry for shouting, but this is what bothers me: when the media can’t take the time to be accurate.

For a recession: jobs available would be LOW, unemployment would be elevated (typically, >10%) and monthly job additions would be negative

We have none of that.

For a true recession, all three spending categories would need to be NEGATIVE. We have none of that, either.

Then Why is GDP negative in Q1 and Q2?  What’s really happening and what should you be watching out for instead?  Click below to keep reading.

Supply chain (global) correction. In both quarters, Imports increased – and it should make sense (even to the Mediots) because the global production capacity (think China) only began to ramp back up in late 2021.

Cars, chips, appliances … heck, even Apple had a 1 to 3-month backlog for shipping Macbooks out of Shanghai (I should know, I ordered mine in November and received it in February of this year).

That production capacity is now returning the supply chain deficits back to “normal.” (I am oversimplifying, but you get the idea).

Imports are a subtraction from GDP; Domestic production is an addition to GDP. So as imports rose at a higher rate than in previous quarters, their impact on GDP was a higher negative.

What we really see is that domestic production (output) has slowed, but has not turned negative in and of itself.

Early PMI reports for both manufacturing and service sectors remain in expansion, not in contraction, territory (roughly a 55 reading for both in July).

So again, we’re not in a recession and the media should shut up and educate, not beat the fear drum.

The Yield Curve remains negative, or inverted at -20 basis points; a 5-point improvement, but still a recessionary signal, or evidence that the bond market remains less confident in a soft landing.

Watch Out For Dow Jones and Down Jones Transportation Average

The theory is that a rise in one should also be reflected by a rise in the other for the trend to be sustainable.  While we’re looking to complete two consecutive weeks of higher highs and higher lows, we’d really like to see both charts cross above that late-May high.  We’d also like to see a pullback from current levels but with higher lows than those made in mid-June.

A weekly chart of the Dow Jones Transportation Index.

What’s Really Happening and What To Do

Beware of “hope” rallies. As we explained in our Q3 Outlook, investors continue to hope for peak inflation which will lead to peak hawkishness by the Fed.

This leads to the importance of the August and September CPI and Jobs reports.

If inflation begins to decline, the market will rally further on the expectation that the Fed will decrease the amount of and a number of planned interest rate increases.

What we need to guard against, however, is inflation doing something like this:

An incremental decrease in inflation is not going to pull the Fed back and it will change the probability of greater-than-expected rate increases in September/October meetings.

That will cause the market rally to collapse – not this one GDP report.

We continue to maintain our S&P 500 targets:

If we continue to trade in that range for the next 60 days, we should avert another 5-15% decline in the S&P 500. Any change to CPI, Jobs, or Manufacturing/Service sector data will determine whether we experience a recession, a soft landing, or nothing.

And we will continue to keep you ahead of the data and the market.

Now, go enjoy your weekend. It’s still summer, after all.