Is Zoom a Buy or Sell Right Now?

Zoom was a pandemic favorite as schools and businesses sheltered in place and began a new phase of life. Now that the economy normalizes, is there still a place for Zoom (ZM)?

Along with the growth stocks of the pandemic, Zoom has been in a near free-fall since October of last year falling from over $550 to now trading at just over $100/share. We’re close to its initial public offering price in 2019.

They are shaking up their executive team, bringing in Greg Tomb as president. Tomb comes from Alphabet’s (GOOGL) Google Cloud team, where he was the vice president of sales for Google Workspace.

It’s hard for the company to beat sales from when everyone was forced into their homes, but recent earnings did top estimates. Zoom has since raised its outlook for 2023.

Zoom has become so part of our vernacular, that people use it as a verb. Sort of like how people ask for a Kleenex, even though that’s just a name brand of facial tissue. So if everyone is still Zooming, at home, at work, and at school, why has the stock been falling?

Its 2022 retreat of 40% can partially be attributed to the volatility in the tech-heavy Nasdaq.

Even if the majority of the workforce starts going back into an office full time, let’s not forget that our economy still heavily relies on collaboration with teammates and vendors all around the country, if not the world. Video calling is here to stay. Zoom still remains a popular way to host webinars as well.

Alphabet (GOOGL) is also working on a rival to zoom, but that one should be taken with a grain of salt. Alphabet doesn’t have a great track record with developing communication software and keeping it around. Need I say more than Google Talk, Google Wave, Google+ Hangouts, Google Spaces, Google Allo, Google Duo, and YouTube Messages to name a few … I think you get the picture.

Zoom makes more money from enterprise sales and is looking to play a major role in call center services, including website chatbots, virtual assistants, and more. There was hype around a possible merger with Five9 (FIVN) to accomplish their goals, but the deal fell through, which kicked off the next leg down for Zoom’s stock.

Let’s take a look at the chart to see where we are now.

The stock has been stuck in a range since early March and finally broke above its 50-day moving average.  Now, look at the accumulation/distribution line (ADL) on the graph below it.  The ADL uses volume and price to determine if the underlying is being bought or sold more.  If the ADL is increasing, the supply and demand for the asset are generally in a bullish trend.

Continue reading below if you want to know the chart pattern that triggered Zoom to come across my desk.

Let’s take another look at the chart, this time focusing on a chart pattern that can indicate a bullish signal. 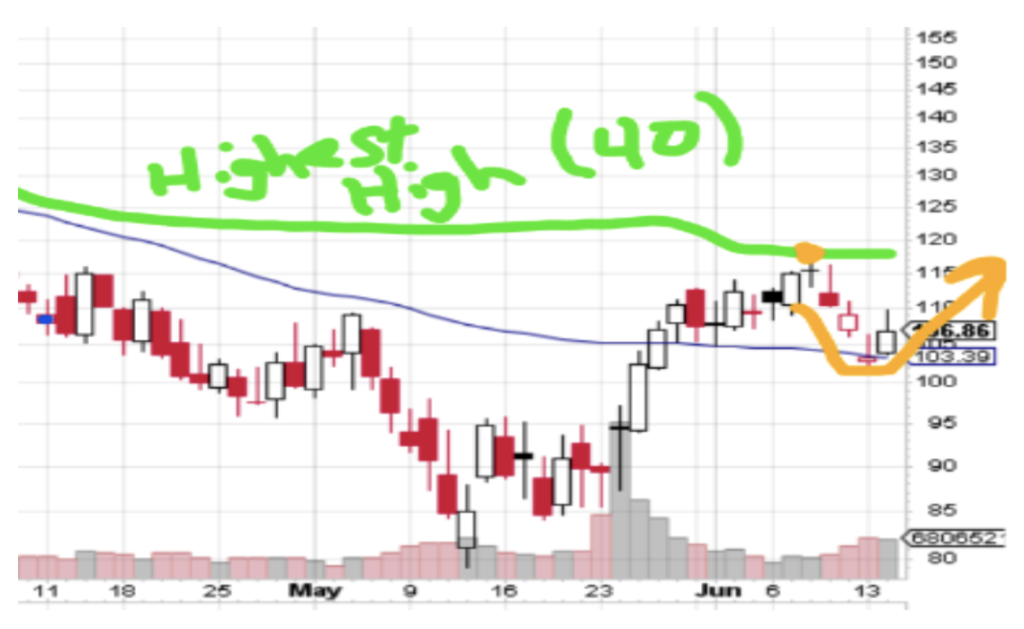 Next, we want to see a retracement, which we saw for the last three days prior to today.  Each day closed lower than the previous day.  Not necessary, but I want to see some type of pullback after a fresh 40-day highest-high.

Finally, we saw the stock break out and finish just above yesterday’s high.  This formed a nice “V” shaped-reversal pattern.  Even better is that it crossed above the 50-day moving average, retraced, and used that as a level of support.

I’d be very cautious about placing any trades until the market settles from the Fed announcement – even if that means waiting an extra day or two.  But we could see a continued upside move in Zoom.

A stop level would be just below the recent low of the pullback.

Even though this is a bullish signal, you still need to remember the context of what market we are in.  A good way to hedge is just to trade smaller sizes, take profits early, protect profits faster by adjusting your stops, etc.