It's Time To Decide...Are You Going To Be Greedy Or Fearful?

Markets have been a chaotic mess.

Look at the Dow Jones, for example.

Making things worse, the Federal Reserve finally realizes its behind on inflation.

Now, instead of four potential rate hikes in the new year, Goldman Sachs says we could see a total of seven. Couple that with tensions over in Ukraine with troop build ups, and there’s another reason for potential downside.

At the same time, we also have to consider that fear is getting a bit out of hand.

Perhaps, as Warren Buffett has said, it’s time to get “greedy when others are fearful.”

Or, as Baron Rothschild has said, “The time to buy is when there’s blood in the streets, even if the blood is your own.”

For one, “We ought to stabilize in here. I don’t think there’s much [Fed Chair] Jerome Powell can say here that’s going to make things worse. Starting balance sheet reduction is under consideration. All the real doves said we’ve got to get started. Inflation is now a problem,” said Barry Knapp, head of research at Ironsides Macroeconomics, as quoted by CNBC. “The market is going to stabilize because the growth outlook is not deteriorating.”

Two, the Dow is technically oversold.

After plummeting from a high of 36,952 to 33,150, the Dow has become incredibly oversold on relative strength (RSI), MACD, and on Williams’ %R. If you pull up a two year chart, you can see that each time these three indicators align this deep in oversold territory, markets bounce back. 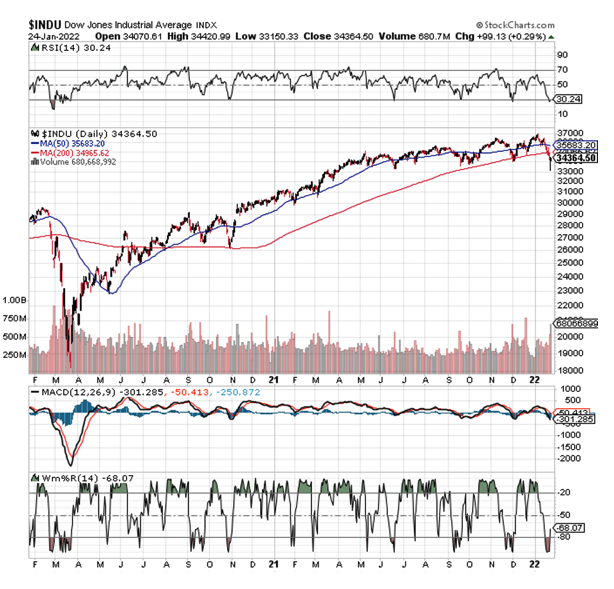 All we can tell you is that the fear, the pullback, the Federal Reserve concerns, the issues over Ukraine are getting old. Plus, most of it has been priced into the market already.

It’s just something to think about as you decide what to do next.