This week is all about the various news events that are causing the market to trade in a range. There’s a lot of hope that the CPI report will show decreasing inflation and everything will be right in the world but look at the U.S. Manufacturing PMI report that came out last week.

There isn’t a single related segment that is positive over the previous issue. Now, you can look at this and say the market will head lower until there’s a positive reading or you can say that all of this negative news is ultimately good for the future jobs report because this should help push jobless claims higher, which should help with wage inflation. 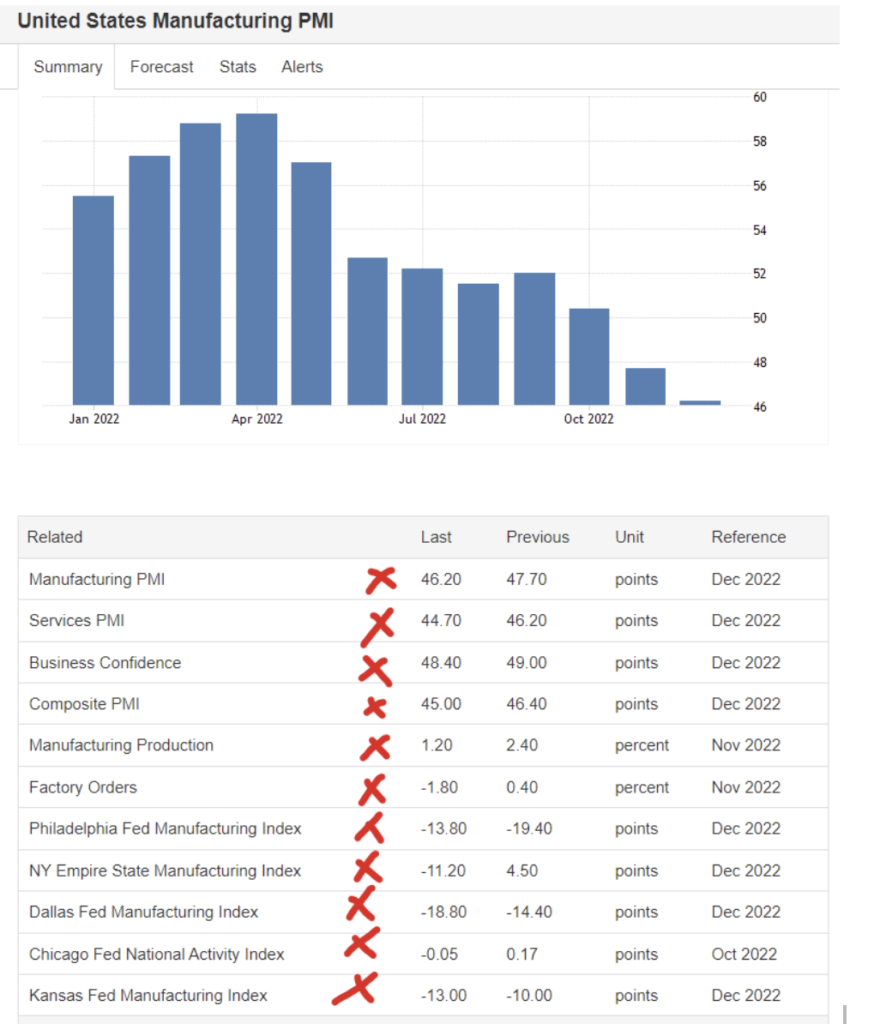 One problem with reports is that they only tell you what you have already seen happen. The PMI forecast is much more positive, but we’ll need to see the January report show results before the forecast is confirmed.

Based on the forecasts, January 2023 should start showing a rebound but look at where we are expected to be by January 2024. The forecast is to be at the same level in January 2024 that we were in July 2022, so while the recovery may start to show in these reports, we will have several months to go. 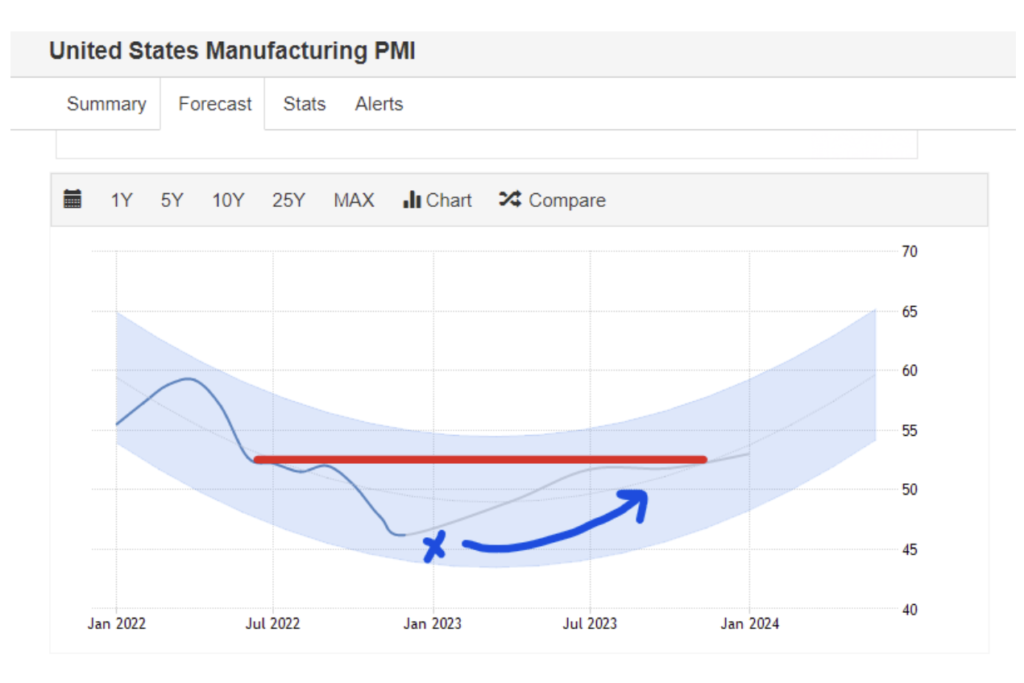 That’s why I’m struggling with being too bullish right now. We have short-term hope and forecasts against long-term struggles and confirmed headwinds.

We had an attempted breakout yesterday, but by the end of the day, the S&P 500 (via SPY) was back in the recent trading range. The chart below is of the SPY, looking at 5-minute increments. The shaded areas are the after-hours trading. Going back to this past Sunday/Monday, we’re still within that same range.

A breakout above $390 at the close would be significant. The SPY closed at 390.50(ish), so that’s a positive sign.  I want to see further follow-through from that point if we’re going to keep moving higher.  Otherwise, a break below $385/386 would be significant to the downside.

The VIX (volatility index) is trading in a symmetrical triangle pattern and could be ready to break out in either direction.  Algos will sometimes fool the retail trader with a breakout of a symmetrical triangle, but it’s still a pattern to keep in mind.  The VIX trades inversely to the market, so a break lower here would mean the markets would trade higher. 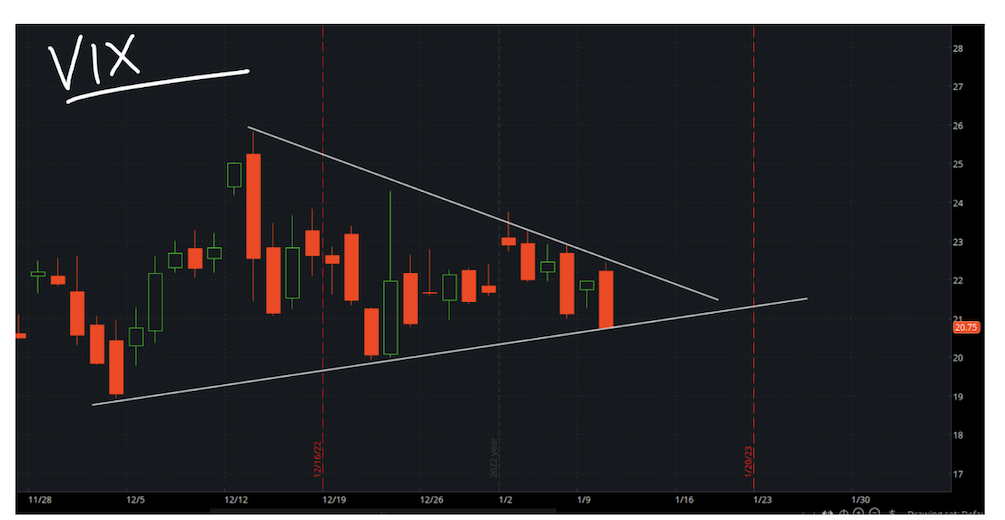 While all of these are good signs for the market and we are likely to see another positive CPI number later this week, just remember that we’re about to head into an earnings season where most companies are set to release future guidance that will likely lower expectations for the next quarter.

Remember, companies might offer lower guidance this earning season so they can “beat” earnings next season.

The S&P 500 broke out of its sideways channel and is back to marching up to its long-term resistance line near $395. That will be the next hurdle to beat. 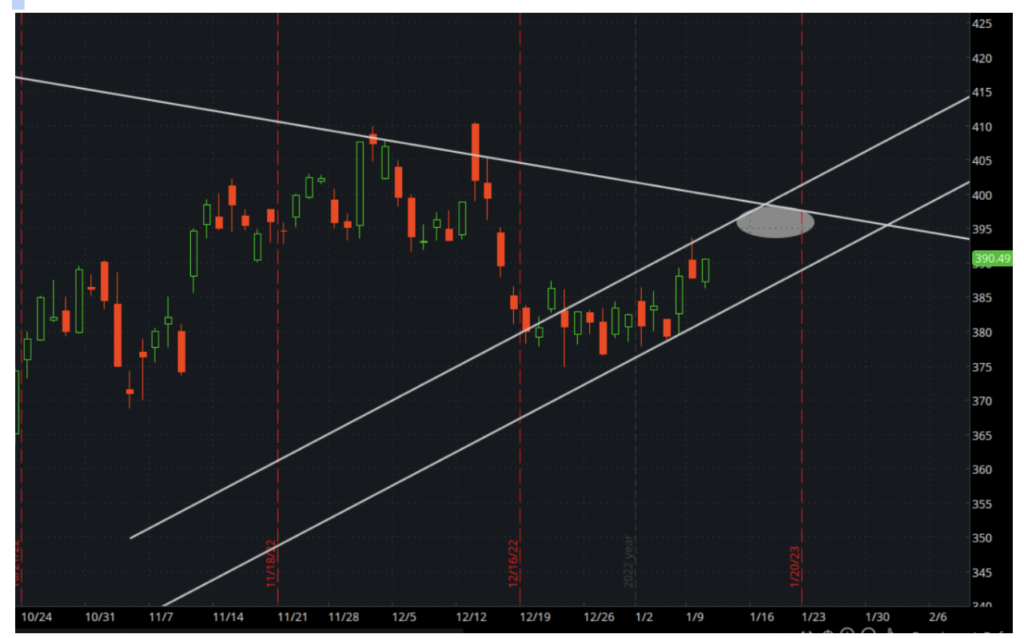 With the upcoming holiday, earnings, and the CPI report, I haven’t been trading much. I want to see how the markets shake out, but I do have a trade idea for you today.

The World Wrestling Entertainment Company (WWE) released news that its owner/previous CEO is coming back to run the company.

I guess Disney has shown people the way. Will Bezos be back to Amazon soon?

Ok, back to WWE. The CEO and wrestling kingpin stepped down months ago over allegations of sexual misconduct. The two women are seeking legal compensation, but the report is that Vince McMahon will be returning to take the helm and return value to its shareholders.

This company didn’t have any issues with 2022. It was one of the few companies that kept going higher.

Let’s zoom in to the chart and see the latest price action. 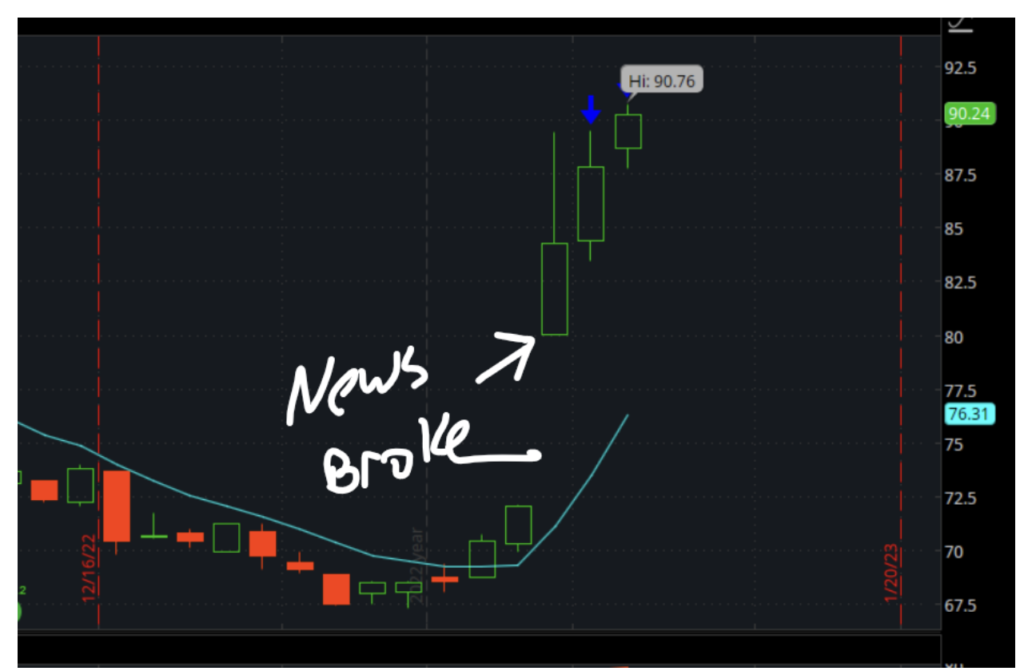 The stock jumped from about $67.50 to $90.24 in 10 days! That’s over 33%! The stock had a parabolic move higher and while I can’t say that it will head lower overnight, I can’t see this thing keeping up with this move without some type of pullback.

The options strategy I might use here is a bear call credit spread. That involves selling a call closer to the current price and buying a call further away.

Now, maybe the CEO will change things around and the stock will march higher from here, but I’m looking for a bit of a pullback and a quick trade, so I’d set a profit target of about 50% on this trade.

With a 50% profit target and a stop loss at the short strike, we’ve essentially created a 1:1 risk:reward trade. The stop loss is $75 per spread and your profit target is also $75.

This trade isn’t for everyone, but it’s a good example of how stocks can be breakouts and have really strong indicator readings, and be above moving averages, but might be a good counter-trend trade.

We’re going against the positive momentum and news, so this is an aggressive trade. I would trade with fewer contracts. This stock jumped off the top ropes, but it has to come down some, right?