Remember when everyone was rejoicing in the street and the market rallied by 900 points and everything was right in the world?  Wait, that was two days ago and the market already retreated?  Boo!

That’s one reason why we’ve been talking so much about market-neutral strategies in this newsletter.  Selling premium in this environment is one of the best tactics right now.  That can be anything from iron condors to calendar spreads or diagonal spreads.

It only took the first hour on Thursday for the market to give back the gains from the day before.  As I pointed out yesterday, we’re back to where we started… again… Rinse and repeat…

Tech stocks were again hit hard as the growth environment seems to be gone for now.

It’s not time to run for the hills, but a vacation might be what you need to keep your mind off the whipsaws in the market.  At least that’s what Marriott is expecting.

Marriott (MAR) reported earnings and had the largest surge in global demand in the first quarter since the pandemic began in 2020.  The company also announced that it will be resuming capital returns to shareholders in the form of dividends and stock buybacks.

Booking (BKNG) also reported better than expected earnings of $3.90 per share on revenue of $2.7 billion.

Travel stocks can act as a predictor of sorts since people have to book their travel ahead of time.  Earnings announcements from airlines and hotels have been telling us the travel industry is expecting a busy summer, despite inflation and any other negative news out there.

Meanwhile, Europe announced that economic expansion ground to a halt and faces high costs as a barrier to future growth.

The Fed put actions into place to fight off inflation, but only time will tell if their strategy works.  We’re not going to be out of the woods until a couple of these crises go away.   Russia invading Ukraine, surging oil prices, inflation, and higher interest rates will continue to cause turmoil in the markets.  Something has to give, but what will come first?

Like most travel stocks, earnings this year have shown monumental growth from the same quarter a year ago.  LUV was no different, showing a 128% increase in revenue.  With airlines, hotels, and travel planning companies expecting a strong travel season, LUV is positioned to grow alongside the other companies in the industry.

It’s in a bit of an uptrend since making new lows in early March.  If it can break through some of these resistance lines, we can see LUV take flight.

SECTOR PERFORMANCE
Aside from it having real-world implications, this is almost comical.  One day the sector performance charts are green and the next they are all red.  The 3-month performance chart is telling you that more sectors are red than green so we’re certainly facing a bear market.  The smaller time-frame charts flipping from red to green and vice versa is reaffirming my stance on market-neutral strategies with a bearish bias. 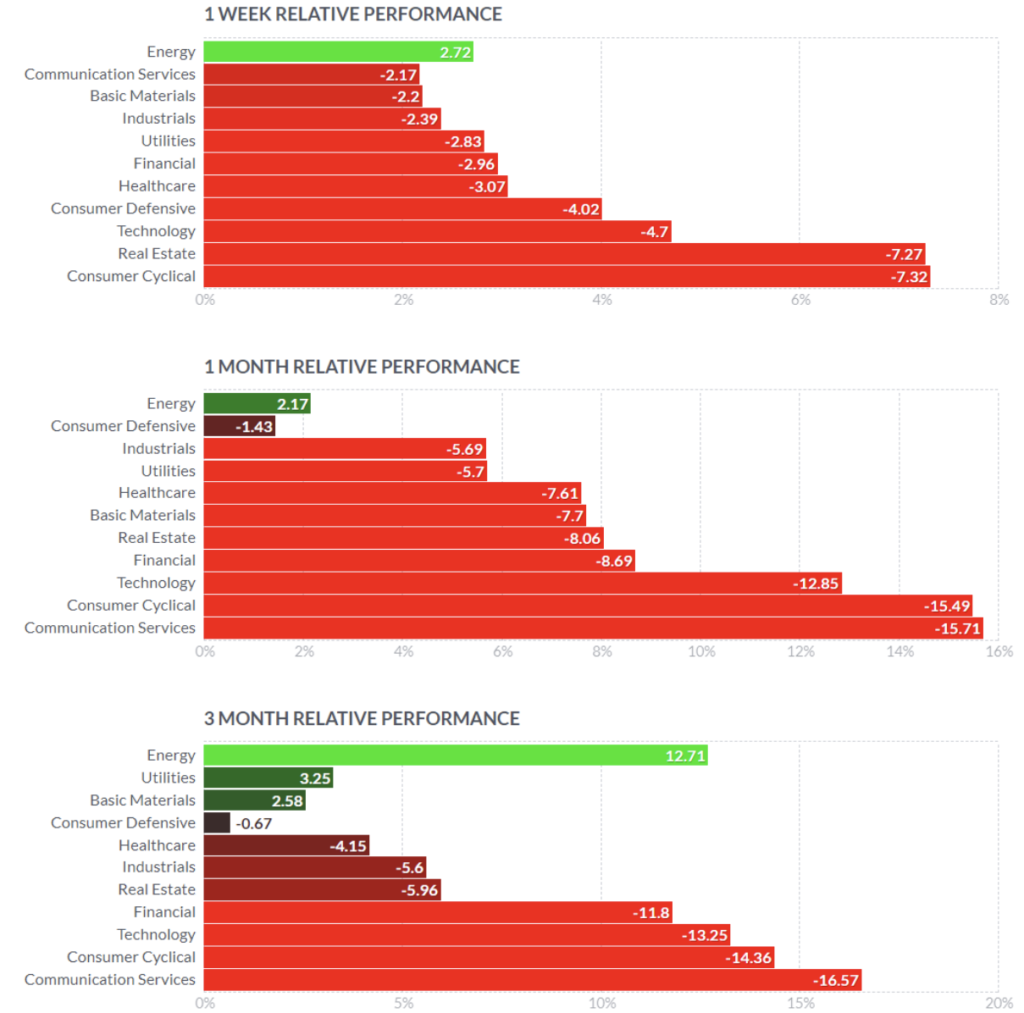 Money management and trading psychology during these times are paramount.  I was talking to a trader who keeps insisting a bullish market pivot is coming.  I’m not as sure, but who am I to get in his way?  The only piece of advice I gave him (since I’m not registered to give advice) is to trade small.  When the market eventually does turn around, you want to make sure you still have money to use.  There’s little use in trying to time the market with pinpoint accuracy.  I’m ok following the crowd.  If that makes me a little late to the bullish parade when it happens, so be it.

There are going to be these big swings for the foreseeable future.  You need to be mentally prepared and ok with your trading decisions if they go against you.