Are we in another bear market rally or the start of something new? That’s what everyone wants to know, especially as we go through earnings and more companies are warning about a potential slowdown or a recession.

That means it’s time to break out this chart, comparing the stock market cycle and the economic cycle. 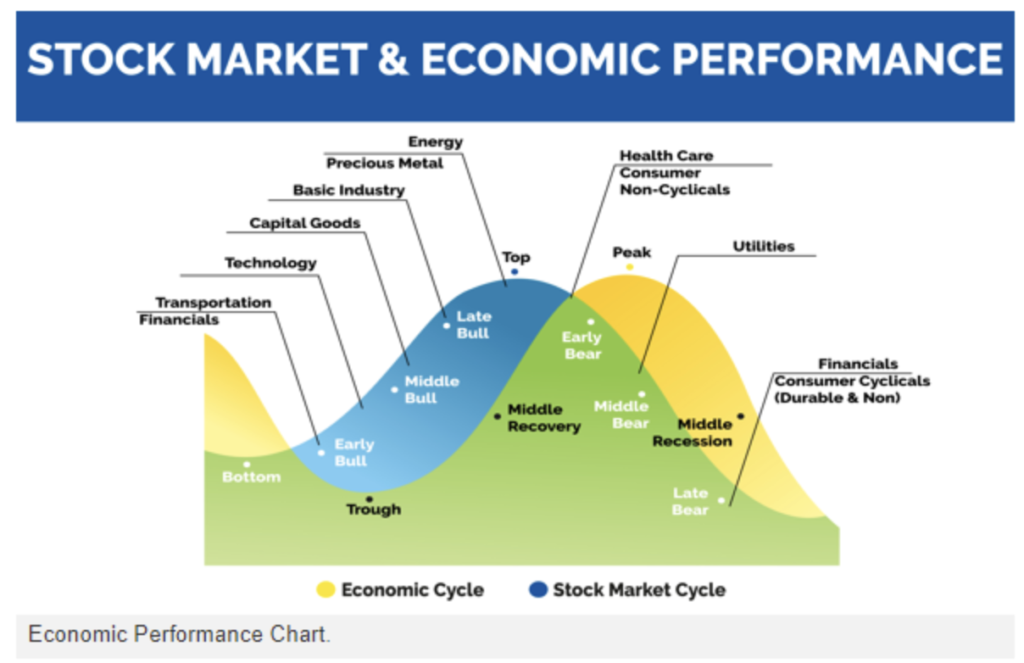 There are a couple of things on this chart that stand out to me, so let’s go through them.

Here’s a chart of the SPRD Trust Financial ETF (XLF). Since October we’ve been in an uptrend. 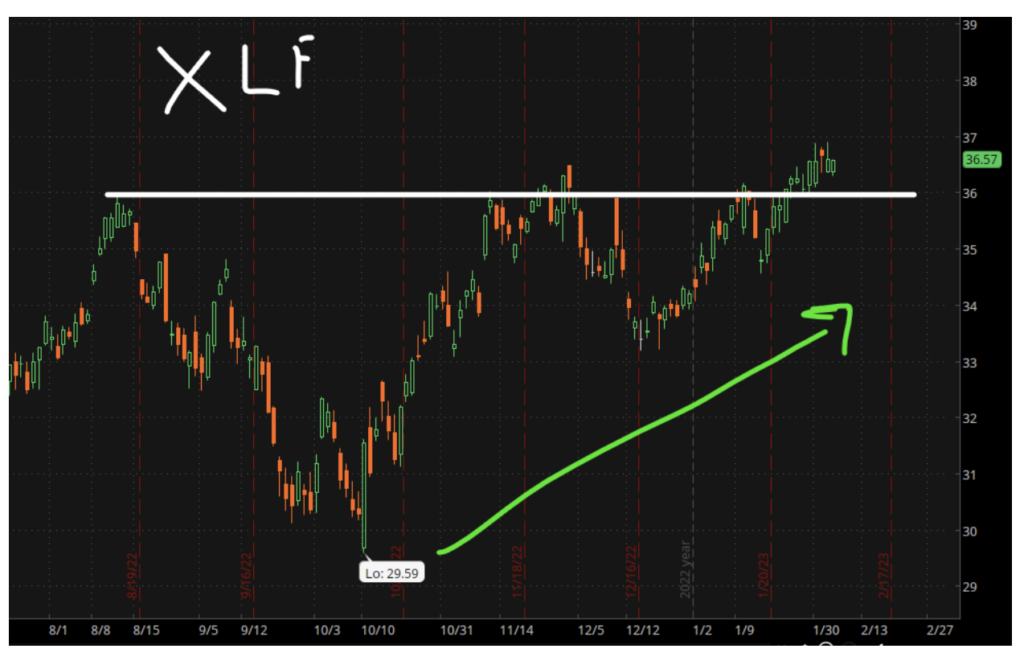 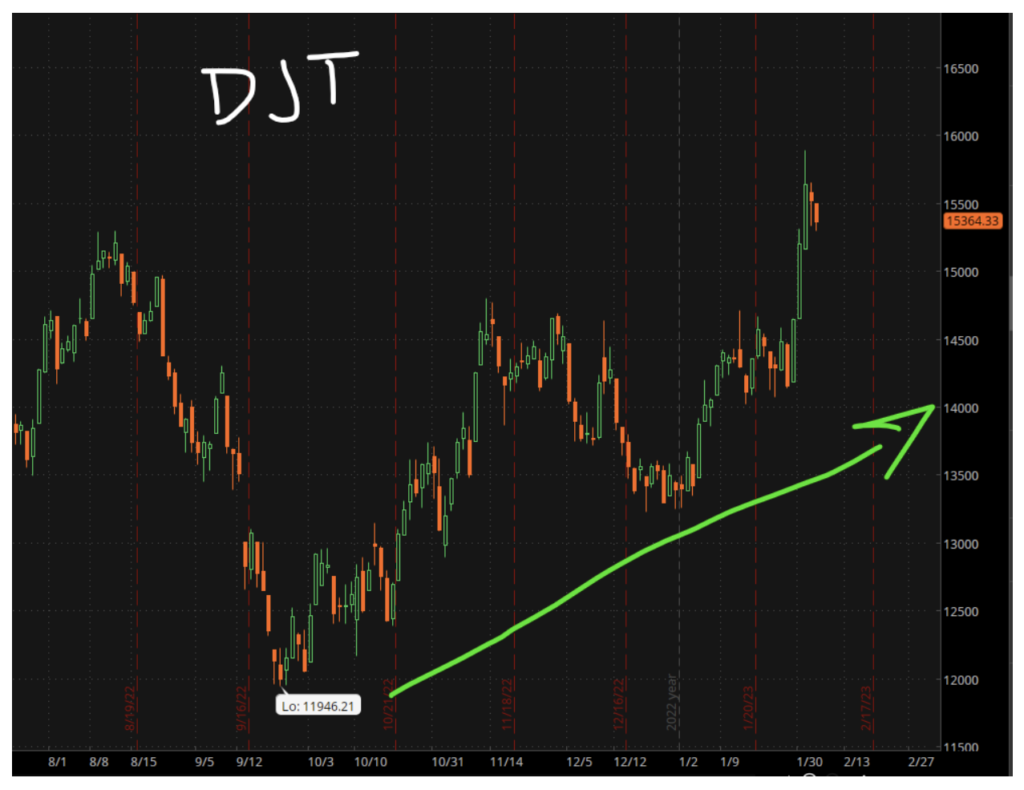 The next phase of the bull stock market involves technology and you might be thinking that’s where this whole theory breaks apart. After all, there have been countless stories about tech firms losing employees, but as I mentioned yesterday, most of that was due to over-hiring during the pandemic and now growth has returned to normal levels.

Let’s pull up a three-month chart of the SPDR Trust Technology ETF (XLK). Sure, it’s not the best-looking chart, but if that’s all you had access to, wouldn’t you say technology is in an uptrend? We are clearly moving from the lower left to the upper right of the chart.

I’ve been bearish on the market for months and I’ve certainly been slow to jump on the recent rally, but I can start to see the sector rotation and why the bulls are excited.

I’m still worried about stocks rising based on little revenue growth, but a stock gain is a stock gain, even if it’s only propped up by stock buybacks and cost-cutting measures.

My Traders Reserve colleague, Haley Bjorklund, is an Options Instructor in the Options Testing Lab and recently discussed the waves of the market and why this could be the beginning of a new bull market.

From the chart below of the S&P 500 (SPY), you can see that we’ve been making a series of lower lows and lower highs, but that all changed in January 2023. The market did not make a new low and instead, went up to break higher from the most recent high.

What phase of the market do you think we’re in right now? Is this a fakeout breakout? Or are the bulls back?

Today’s trade of the day is on Square, ahem, I mean Block Inc. (SQ). Here’s the weekly chart and we can see that we are in an uptrend and we do have earnings coming up. 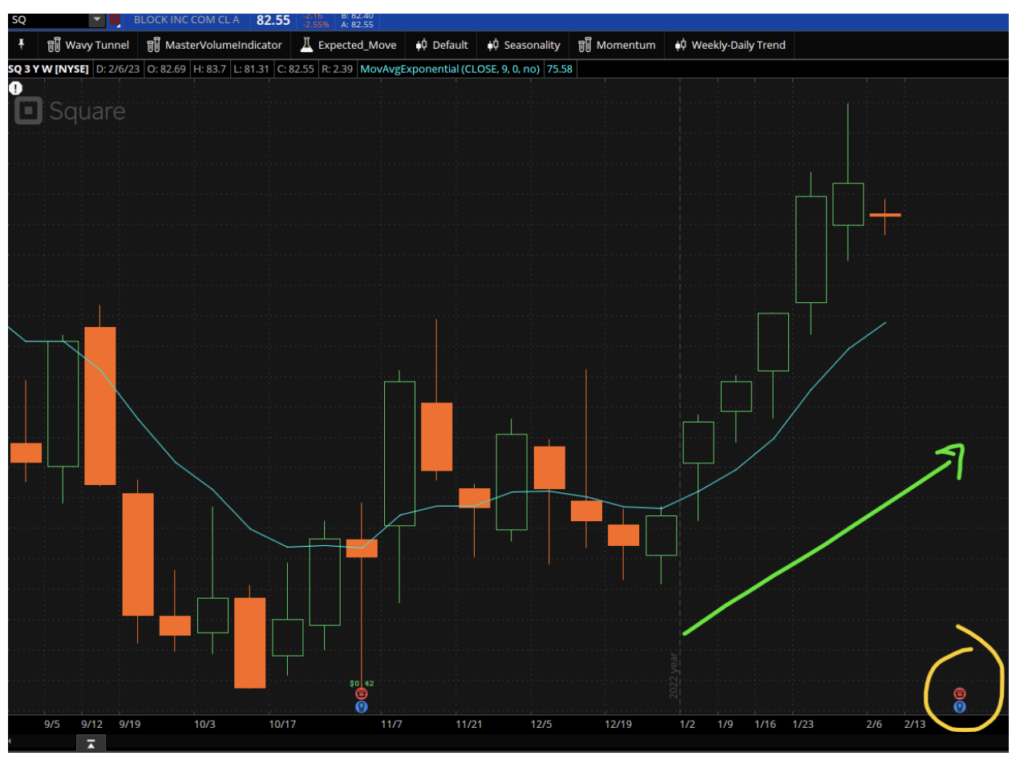 And now the daily chart:

The stock has pulled back by over $8 in the last two days, which means it’s pulled back by as much as the average range over the last 14 days, meaning it’s already made a significant move lower.

But if I think the price of the underlying might still go lower, I can adjust the amount of credit I want to get for the spread.

If you’re using ThinkorSwim, go to the Analyze Tab and look for Price Slices. Enter the price that you think the stock might go to – in our case I used $78.13.

Change the date to today or tomorrow (depending on if you’re looking during market hours).  I’m looking after hours, so I’ll enter tomorrow’s date.

Click on the number under P/L and you will get to view the trade you’re setting up.

So if I think the stock might still go down lower, I don’t want to place the trade quite yet and have the credit go against me from 1.46 to 1.87. That means I’d be looking at a 0.40 loss in one day.

But I can place a Limit Good-till-canceled (GTC) order for let’s say 1.85 and let the market come to me. If SQ does go down tomorrow or even the next day, why not try to enter and get a better price for the same exact spread? I know what the spread will be worth if the stock price comes down to my estimated price.

Now, if the market and the ticker hit a support level and start going up, you can cancel your order and sell the spread for the current price. You might not be able to get in for $1.46 if the market is moving higher, but it’s still a good trade as long as the credit is above $1.25.

Now, some of you might look at the candlestick pattern and say, “but that’s a gravestone doji!” That’s fine. I could be wrong about the direction of this trade.

But if SQ does go lower and we get filled on the spread for $1.85, we still have an acceptable risk-to-reward ratio in my book. If you decided that you wanted to collect 50% of the premium as a profit target, you’re looking at about $90. That means the stock could go as low as $70 before this trade would lose $90.

Let’s go back to the stock chart.

Even if I’m wrong, this article is more about showing you how you can pre-enter a trade by determining the likely price of a spread and placing your trade in advance and then let the market come to you. Pretty neat, huh?

Any trade or trade idea discussed is for educational purposes only.  They will not be tracked as an official trade recommendation.

No more posts to show