One Stock To Watch Next Week

We are going to host another Filthy Rich, Dirt Poor live event on Monday at 9 AM EST.  We’ve been working through some bugs and we’ll be back to discuss what we see happening in the week ahead and how you can trade around it.  Be sure to check the TradersReserve.com home page Monday morning or watch out for an email with the link to the live stream.

The Fed has been testifying before a congressional committee this week and finally, we’ve heard a bit of truth.  The Federal Reserve Bank of Philadelphia President Patrick Harker said, “We could have a couple of negative quarters.”

The more we can be honest about the situation we are in, the quicker the market can start pricing in the data and revise its projections and soften the volatile moves we’ve been seeing lately.  The global economy has some issues that may take years to settle, but the US job market remains strong, which means there’s a chance of a soft recession with a modest contraction in growth.

Market makers haven’t started pricing in a hard recession, so should we be headed in that direction, the Nasdaq could see another significant dip before a market bottom is in.

The 2008 recession had its fair share of bear market rallies.  The initial retracement came back 24% before continuing the drop down.

If we are to make any significant headway to get out of the bear market, we need to see small caps from the Russell 2000 and some mega tech companies like this one stock to lead the charge.  Until then, we are in a bear rally.

Which one stock am I talking about?

Here’s a chart of Apple and you can see the last bear rally brought Apple up to the $150 level.  We have a trend line coming down to the $142.50 level too.  If we’re going to break out of a bear rally cycle, I’d expect to see Apple break these two key levels of resistance.  If Apple comes up to either of those lines and respects them as a point of resistance, I anticipate seeing the market head lower and possibly even create a new lower-low.

The reason I look at Apple is that it is so heavily weighted in some of the major indices. Therefore, Apple will play a major role in changing the indices price higher or lower.

With the July earnings season approaching, we have the Fed saying we have a couple more negative quarters ahead, but we also have what appears to be overly optimistic earnings estimates, showing potential earnings growth. If earnings estimates are too positive and the numbers come in less than expected, we could see the next leg of the bear market come roaring back in July.

In other news, there’s been talk about a gas tax holiday, where the government temporarily stops collecting a tax of about $0.17 per gallon of gas for three months. In theory, the consumer gets a little relief at the pump.

While a gas tax holiday seems appealing, the savings per household isn’t enough to be significant compared to the risk of taking funds away from infrastructure projects, but politicians need to do something to show they are trying to help voters before the midterm elections.

If Congress does pass a gas tax holiday, I have an options trading recommendation.

If, and it’s a big if, we get a gas tax holiday for three months, companies like Uber (UBER) and Lyft (LYFT) could be the beneficiaries in the short run. Let’s look at a strategy you can use by selling stock options to potentially take advantage of a near-term bump in the ride-sharing companies.

We’re going to use UBER for this example. We have a line of support going back to the pandemic low of around $20 and we have a resistance line just above $25.

We can look at writing options to take advantage of heightened option prices, and then protect ourselves by buying further out-of-the-money options near the support and resistance lines.

The current price of UBER is $22.35. If we think the gas tax holiday was going to get approved quickly, we can skew this to be more bullish by selling calls and puts and different strike prices.

Position break-even (at expiration): If underlying finishes between $20.14 and $24.86 at expiration.

Here’s the risk graph for the trade. 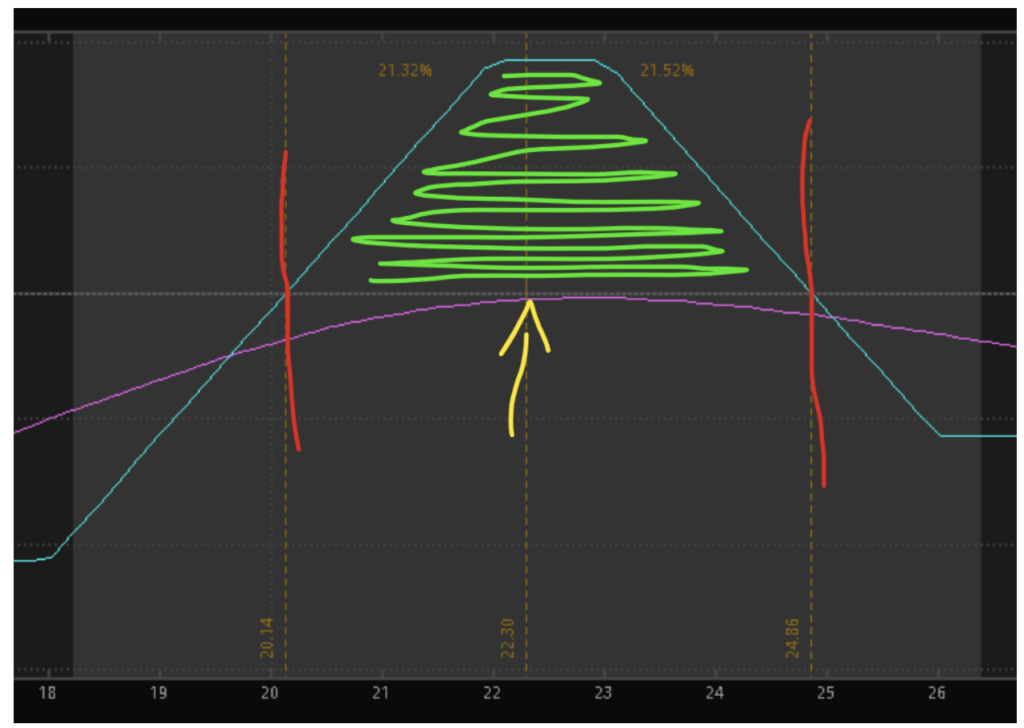 Let’s say that you look to take profits at 25% of the max profit, you’re looking to make about $46 per contract. You can certainly hold on for longer, but I like 25% – 50% for these types of trades.

If you hang on until expiration, the trade will be profitable as long as UBER stays between $20.14 and $24.96 (shaded green area in the chart above) and you would get to keep the entire credit received when placing the trade ($186 per contract).

For a stop loss, you can set an alert to exit the trade at either one of the break-even-at-expiration prices. Your max loss at those levels is $36 to the downside and $18 to the upside. We’ve now created trade with a better than 1:1 reward to risk ratio, and we skewed the trade to be more bullish, while still being very close to being within the expected move range. This trade also benefits from time decay with 22 days to expiration.

Have a great weekend and see everyone on Monday for our live edition of Filthy Rich, Dirt Poor.