Technically speaking, a recession is measured as two consecutive quarters of declining GDP.  At least that’s how economist Julius Shiskin defined it in 1974 and it’s stuck ever since.  Did you know that Shiskin had more rules, but over the years the only one that stuck was dealing with GDP contraction?  Let’s take a look at some recent recessions.

The SP500 had a high in March of 2000, but all the way through July 2002 the GDP only showed a single quarter of contraction.  Fast forward to 2007 and there was a market high in October, but in May of 2008 websites were still asking if we were headed into a recession because the GDP contraction rule hadn’t been triggered yet.

That brings us to today.  We had a high in January of 2022 and the talk of that pesky “R” word is back with the report that came out last week that the GDP contracted in the first quarter of 2022. 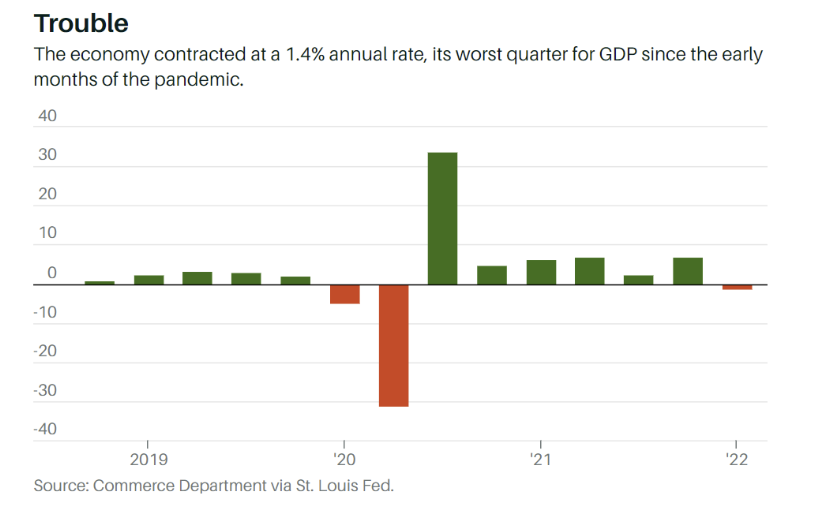 While the official definition wouldn’t have us in a recession until the end of next quarter (assuming we have another contracting GDP quarter), one may ask, are we there already?

Let’s break down the numbers.

The data, reported Thursday by the Commerce Department, marks the worst three months for GDP since the pandemic hit in the second quarter of 2020.

The drop-off in the first quarter was led by a surge in imports and imports count as a subtraction in the GDP calculation.  Americans were buying more goods from overseas, but remember how we’ve been talking about a backlog of goods at the ports?  It wasn’t that long ago the nightly news had a story each night with videos of the ports with ships waiting for weeks to unload their goods.  Several of those goods were not ultimately delivered until the first quarter of 2022, which is now skewing the numbers.

Demand for goods in the first quarter slowed partially as a result of the stockpile of goods that were finally delivered from the ports.  Meanwhile, corporate and consumer spending increased, as the job market remained hot.  Companies continue to spend on attracting and retaining top talent.  Higher wages have allowed workers to forget about inflationary pressures, which is why I think we’ll still see an uptick in summer travel.

There’s more to this recession story though.  We’re going to get into the housing part of the equation tomorrow and the job market later this week.  We have a lot to process with the Fed meeting and jobless claims later this week.  We’ll keep talking about the “R” word and the types of tactics the folks at Traders Reserve will use to collect premium each week.

What do you think? Are we in a technical recession?  Do you think the definition of a recession should be revised instead of waiting for two full quarters of GDP contraction?

With the large swing down over the last couple of days, volatility has spiked.  If we see a volatility crush after the Fed meeting, the cost of puts should decrease quickly.  We don’t know what reaction the market will have after the meeting, but we want to take advantage of heightened premiums in the options market, so an iron condor on the SP500 ETF (SPY) could work here.

It’s a longer-dated iron condor, which may take longer to come into profits, but it also gives plenty of time to recover should it be tested on either side.

If we see the market rally after the Fed meeting and then turn around and head back in its downward direction, we could find ourselves right back at this same price a couple of weeks from now, so let’s see if we can make time decay work in our favor here.

All eyes remain on the Fed meeting this week.  Analysts are predicting anywhere from a 0.25 – 0.75% increase in rates.

Until the results are announced, I expect to see more selling and heightened volatility. 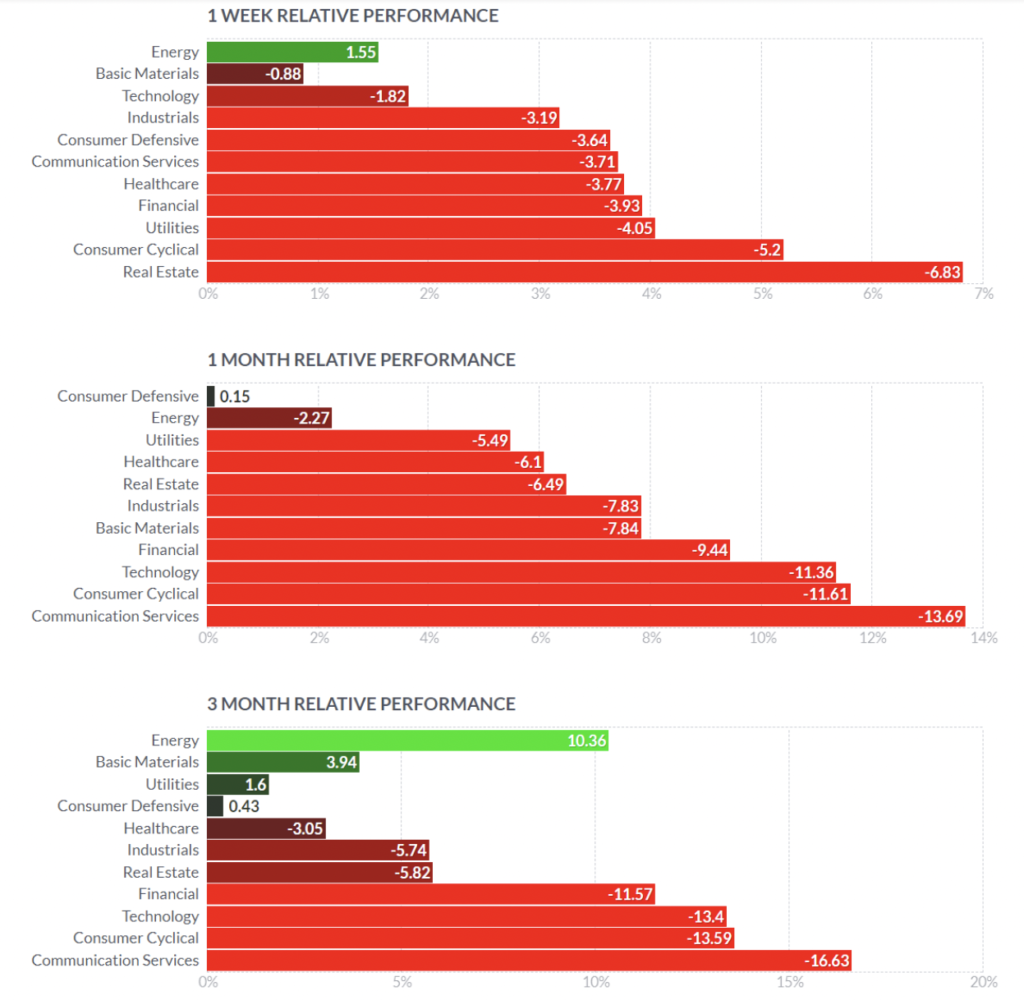 Yesterday we covered the very basics of a point and figure chart.  A column of X’s indicates higher prices and a column of O’s indicates selling pressure.

The $BPNYA is an oscillator of the number of NYSE stocks on a point and figure buy signal.  Since it measures the percentage of companies on a buy signal, it oscillates between 0 and 100.

This is what the $BPNYA looks like in point and figure form (although some view it in normal chart form too).

Unlike other p&f charts, the numbers along the right represent a percentage, not a dollar amount.  Each box represents 2% of NYSE companies. 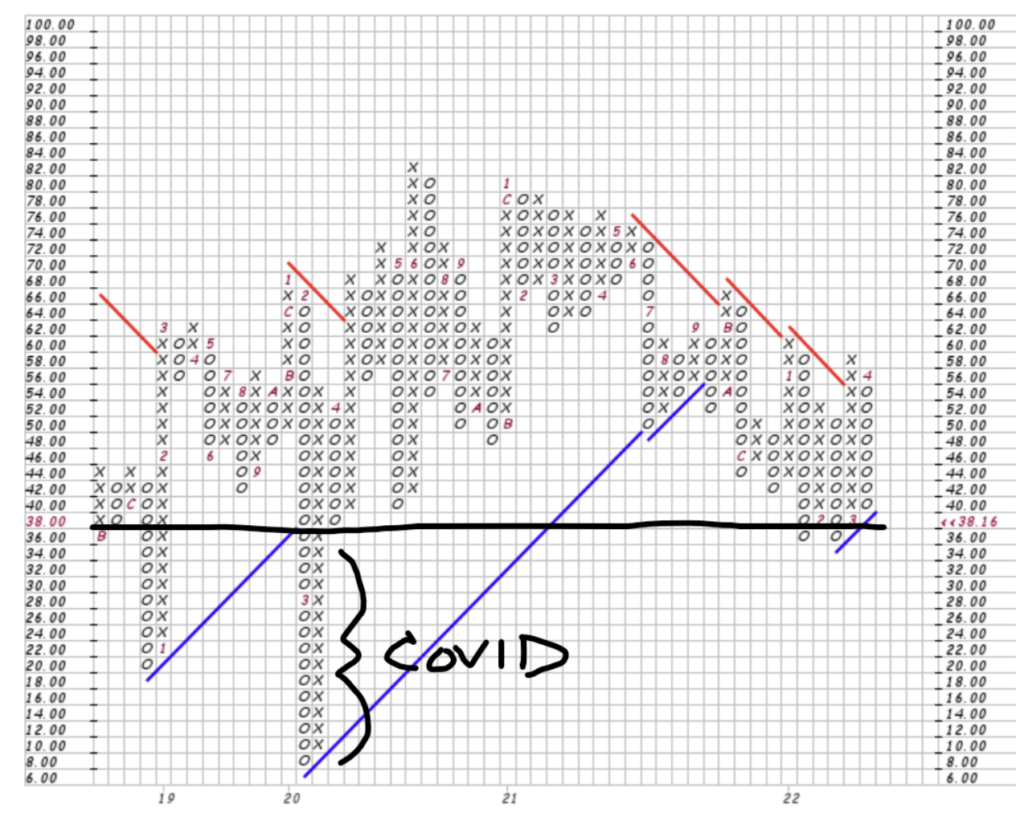 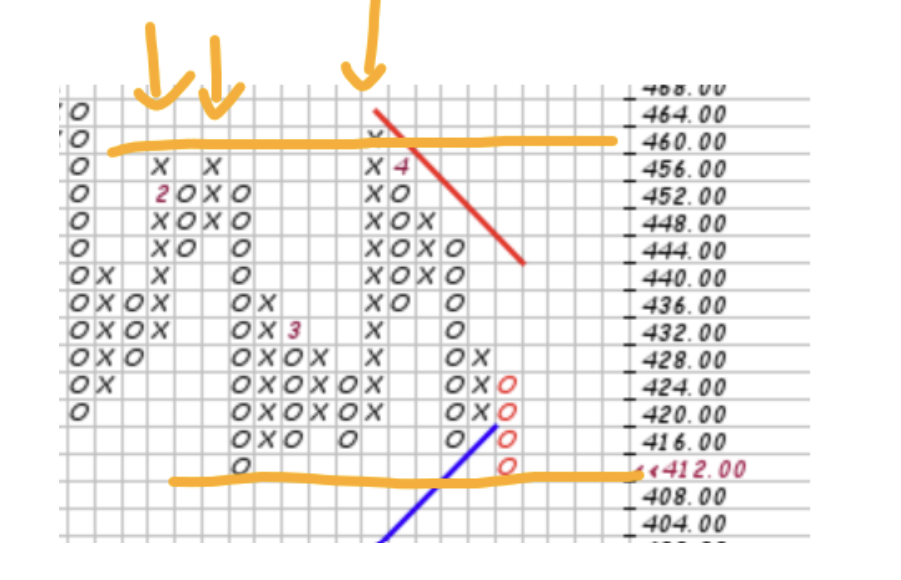 When I look at the $BPNYA, I pay attention to support and resistance levels, but for overall market direction, I’m only looking at the rightmost column.  We’re in a column of O’s so my overall direction is still bearish.  There is a line of support around where we are now, so while I may have a bearish stance, I’m cautious at these levels.
I know this next chart is harder to read, but it goes back to 2011.  There have only been about 6 other times where we were at this 34% level.

Since this is a percentage oscillator and a point and figure reversal consists of 3 boxes moving in the opposite direction, that means we need 6% of all NYSE companies to change over to a p&f buy signal for us to switch to a column of X’s (a bullish market direction signal).  This means this indicator won’t flip back and forth easily, which is why I like to use it to help me time market swings.
A breakdown below 34% could bring about accelerating selling.  Oversold doesn’t mean over.
I use the $BPNYA as a market direction/timing indicator and then go through the major sectors to see which of them are in a column of X’s or O’s to match the overall market direction.  Then go into each of those sectors that match the previous step and see which stocks are doing the same.  This top-down approach can lead you to find the stocks that are likely to continue the sector and market trends.
I know it’s a ways away, but just as much as 30% is showing oversold conditions, a reading above 70% shows overbought conditions.  You can look for potential reversals at these two levels.
If you’re a directional trader, it always helps to trade in the same direction as the overall market.  Having a tool to use to help gauge market timing can keep you on the right track.
While I think neutral strategies are performing best right now, I will still look at the $BPNYA chart each week to get a feel for market direction.  And it’s so simple… a column of X’s means bullish and a column of O’s is bearish.  It takes a few seconds to pull the chart up and get confirmation on a direction.  There’s obviously more to interpreting the p&f chart that we can cover if you want me to, but you can keep it as simple as a binary decision – are we in the X’s or in the O’s?
If you have any questions, comments, or anything we can help with, reach us at any time.