Shake Out Or Another Leg Down?

I’ll start off with a couple of special notes.

Monday: Markets are closed in observance of the Juneteenth holiday.

As a result, the next Filthy Rich, Dirt Poor Live stream is on Monday, June 27th at 9 am EST.

The jobless claims came out yesterday and came in higher than expected at 229k jobs vs the estimated 220k.  That brings the 4-week moving average up to 215.75k claims.  While the numbers are slowly increasing over time, the job market is still hot and so far, the increase in interest rates hasn’t destroyed the job market.  There may be 229k new jobless claims, but it wasn’t that long ago when we had over 11 million open jobs, ready to be filled.  The news was mostly overshadowed by the Fed’s decision to raise rates by .75% and investors had to digest and recalculate their stock evaluations.

The rally from the day before wasn’t backed by high volume and with a three-day market weekend coming up, the buyers disappeared.  I don’t think we will see any type of major rally today either.  With so much selling lately, a reversal day isn’t likely to happen before a holiday.

I have an interesting chart for you today.  I’ve written before about Point-and-Figure charts and the $BPNYA, which is the percentage of NYSE companies on a bullish point-and-figure signal.  Don’t worry if you don’t know what that means.

The chart is showing that currently, only 21% of all NYSE companies are on a bullish signal.  Outside of the corona crash, this is the lowest percentage of companies on a bullish signal since the end of 2018.  That’s why I often say that the selling is overextended, but of course, it can still go lower. 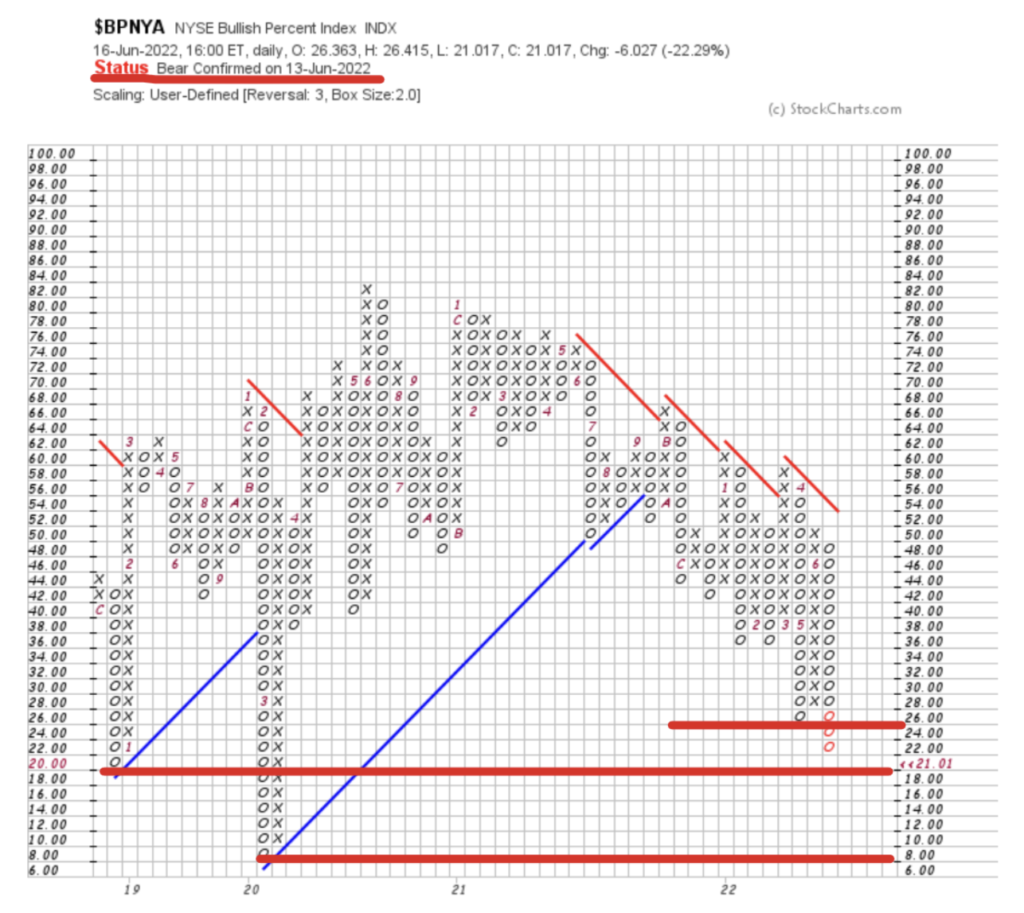 While not shown on this chart, previous to the end of 2018, the last time we were at these levels was 2011.

Is the market really that bad?  I’m not a perma-bull, but the numbers are telling me that a bear rally could be around the corner.  And certainly, you could slowly pick up some market-heavy hitters like Apple (AAPL), Microsoft (MSFT), and Amazon (AMZN), to name a few, as long as you’re willing to invest in them for the long haul.

Here’s a point-and-figure chart of the SPX (SP500).  I drew some red horizontal lines, showing a different way to see support.  In simplest terms, you’re looking for the value where multiple columns have topped or bottomed to draw your support/resistance lines.  This chart shows the next line of support is around $3550, another $117 points lower than where we finished yesterday.  I’m not saying that’s a market bottom, but I’m saying that’s the next likely level of meaningful support and a value we will most likely need to test should we get a significant turnaround.  If we don’t find support at that level, I’m looking at $3250 at the next possible level. 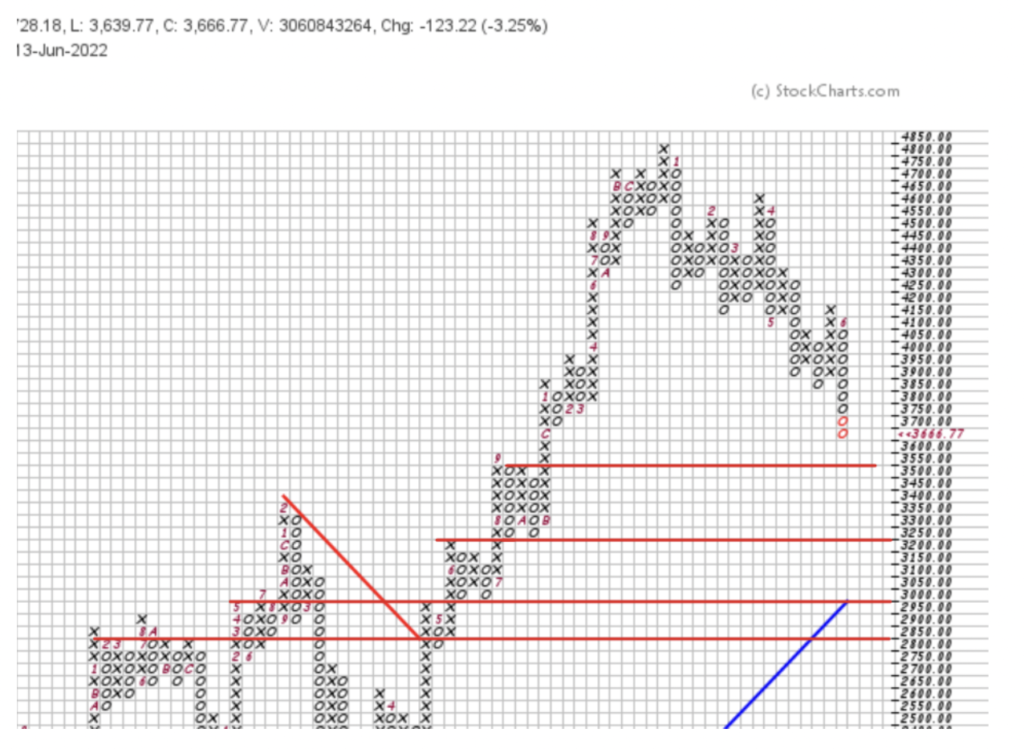 Let’s take a look at the trade idea from yesterday.  I mentioned that I didn’t like AMN and thought it was headed lower and would attempt to fill the gap. 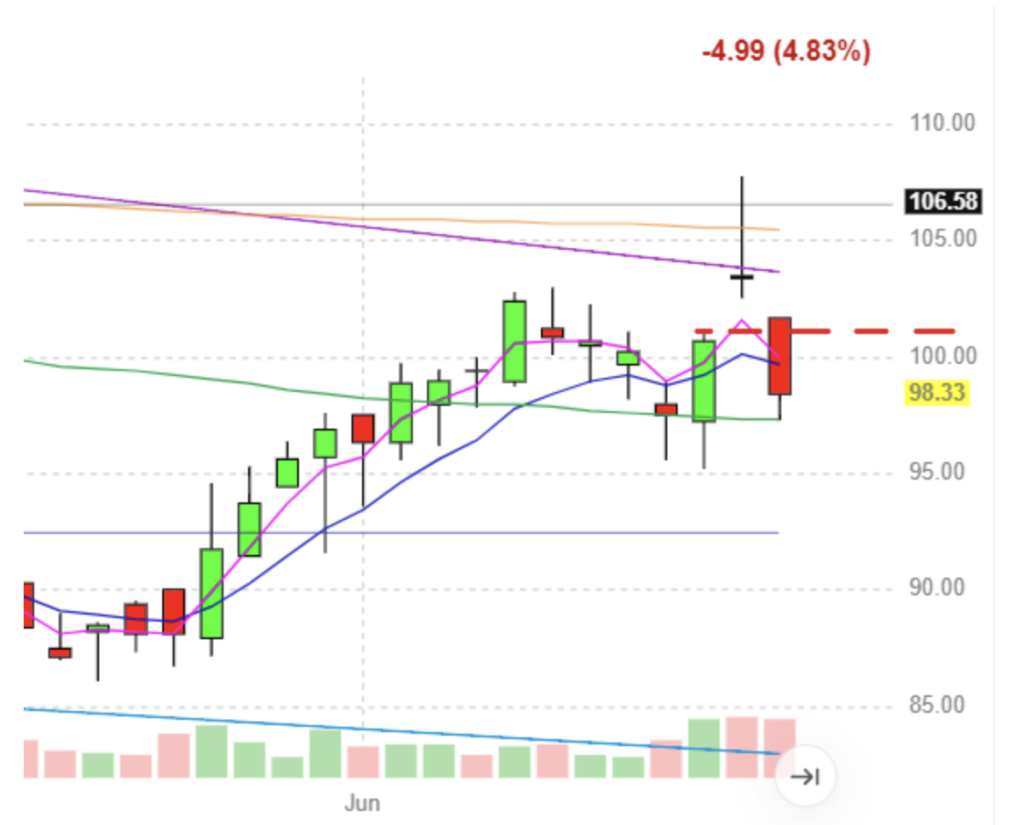 I didn’t know the market was going to be as bearish yesterday, but that certainly helped the AMN trade.  I was looking for it to fill the gap and head down to $100, but I didn’t know it was going to gap down and open at $101.  For those who stuck with it, the stock closed at $98.33.

What’s the next idea I have?  Keep reading below!

We’re going to stick with point-and-figure charts today.  The energy sector has been red hot but has lost some ground over the last few days.  Oil and Gas companies could be negatively affected by a slowing global economy.

Occidental Petroleum (OXY) just broke through a double bottom and has a level of support at $55.

If OXY retraces down to $55, we could see a rebound in its price.  Here’s a different type of chart, showing longer-term support/resistance lines.

Given the holiday ahead and anticipated light trading volumes today, this one is going on my watchlist.  Even though it’s below the sloping red line, it could still head down to $55 before it changes direction, so this one is a hold for now.  If it does decrease to $55, any call option you purchase would be cheaper than it is now, which is why it may be worth the wait.

If we get that lower move and then a reversal, I’ll be looking at the 22 July $56 call.

I’m not sure about you, but I’m definitely looking forward to a mental break from the markets on Monday.  Take the time and celebrate the day.  We’ll be back at it on Tuesday.