Should We Expect Launch Day To Bring Gains To This One Stock? 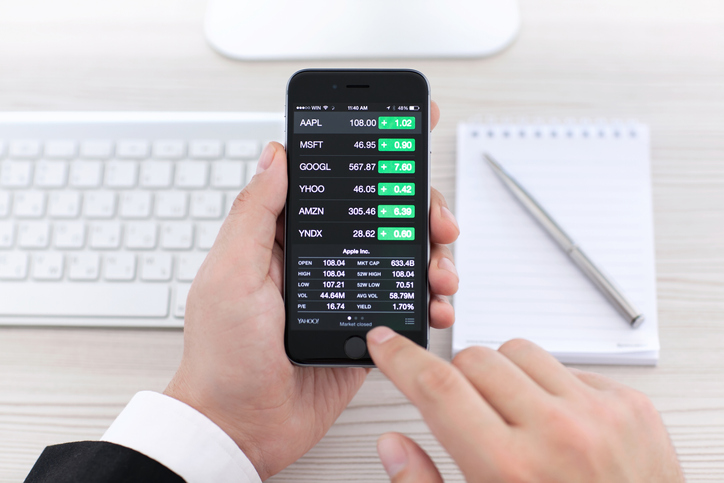 The bears are in control and not letting up so far in September. Bitcoin was also down some 5%, showing that Bitcoin and the markets are closely tied together, even if the percent change is different for each asset class.

Before we get to the one stock that is having a major launch party today and whether that will propel their stock higher, let’s take a look at the markets so far this week.

Rising yields and Morgan Stanley didn’t help start off the week on a positive note. Morgan Stanley is calling for the S&P 500 to hit 3400, or possibly as low as 3000 if we have a ‘proper’ recession.

Here’s what that would look like. Yes, that would mean breaking those mid-June lows despite the rally we’ve had since then.

But, before everyone starts buying puts, I would suggest you may want to wait.  The relative strength indicator, RSI, is flashing oversold conditions at this level. 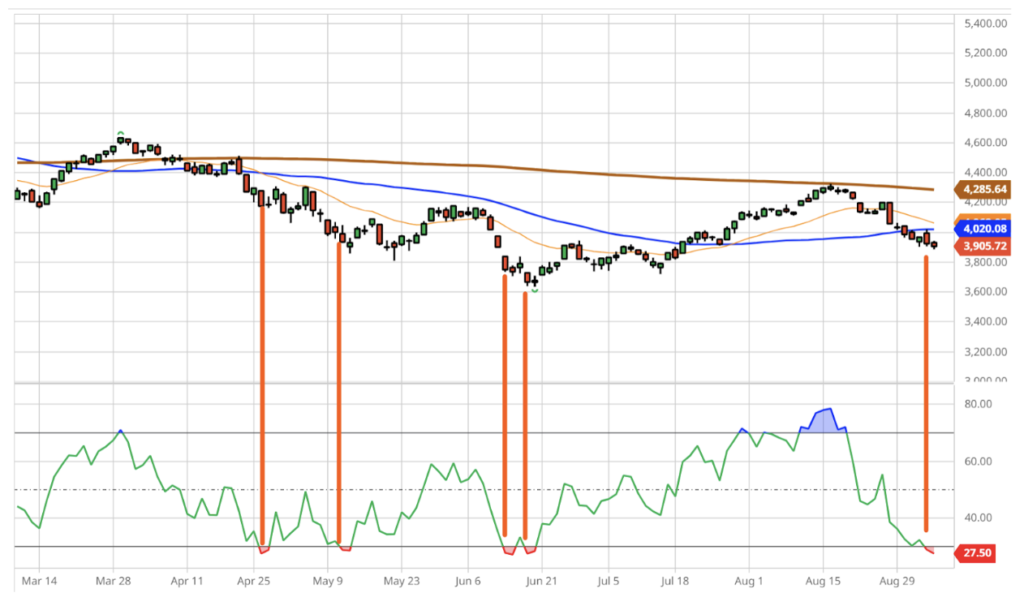 As you can see from the past, this certainly doesn’t mean prices are going to turn around and skyrocket upward, but you can probably hold off for a few days and see if the market can come up and touch the 50-period moving average around 4020.

Now, onto the one stock that with a major launch party happening today and whether that will be enough to move their stock higher. Keep reading to find out who…

Apple (APPL) is having its annual launch day party for the new iPhone at 10 am Pacific time. That’s positive news for Apple, right? Not so fast… In fact, Apple’s big announcement seems to bring a thud to their stock. The marketing machine leads us to believe the new products will be a big deal, full of revolutionary new ideas! However, the specs are typically leaked months in advance so there shouldn’t be too many surprises.

There’s usually more disappointment that the leaked specs are accurate and all those requests people have been asking for are yet again, not going to be on this year’s version.

The launch party comes and goes and we have to admit to ourselves that Apple is no longer a driver of innovation – they are a cash-generating machine. The buzz around the event is more because of the hold that Apple has over its consumers and the ecosystem than the products themselves. The products are no longer known for pushing the boundaries of what’s possible, well, unless you believe their marketing.

As investors, it’s more important to ignore the announcement and know that September is a historically bad month for Apple and it’s not until sales numbers of the new products are released that Apple turns around and marches back higher.

This is a monthly chart of Apple and I’ve placed a red arrow over the month of September over the last few years. Aside from the covid-recovery year, Apple hasn’t had a positive month in September for years, and it’s not starting off so great this year either. 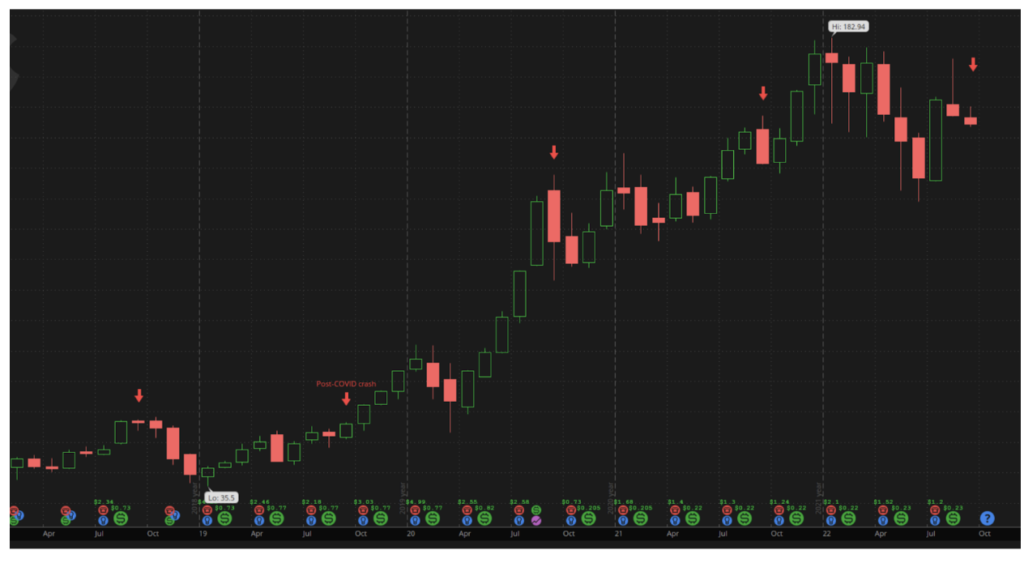 Now, I understand that Apple is a huge part of the market and so whether Apple leads the market lower in September or the market leads Apple lower doesn’t matter.  There’s a high probability that Apple, and the market, are headed for a bearish month.

Given the weight that Apple has in several of the technology ETFs, you can use this knowledge to either buy puts on the stock or on the tech ETFs.  If you’re uncomfortable with either of those, you can buy inverse ETFs that increase in price when the stocks in that ETF move lower.

What do you think?  Does Apple have what it takes to buck its trend and have a positive month?