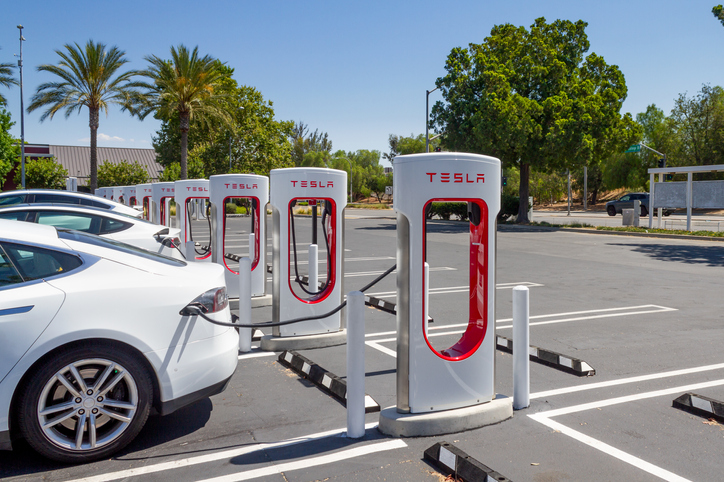 I tried to warn everyone. A pullback was in the works and took over the markets on Monday. The 10-year note climbed above 3% and now there is more talk about the Fed increasing rates from 50 to 75 basis points in September since inflation is still lingering.

You can blame this move on whatever news story you’d like, but the reality is the markets went up too fast over the last couple of weeks and needed to be brought back to Earth.

There is a case where we might have seen the majority of the downward move already.
We’ve been in a channel since mid-June and we’re at the bottom of that channel with the 5-period Relative Strength Indicator showing oversold conditions. The RSI isn’t going to change tomorrow and go back up, so the selling is most likely not over, but we could experience some chop over the next couple of days and then start to move higher.

However, if we break this channel, the next level of support on the SPY is $410 (4100 on the SPX) because it’s a psychological level, but otherwise, I’m looking at $405 (4050 on the SPX). That’s another 2% lower (just like the move on Monday – ouch!). There are opportunities to bounce off 50-day moving averages, but I think everyone will be waiting until the Fed speaks on Friday. 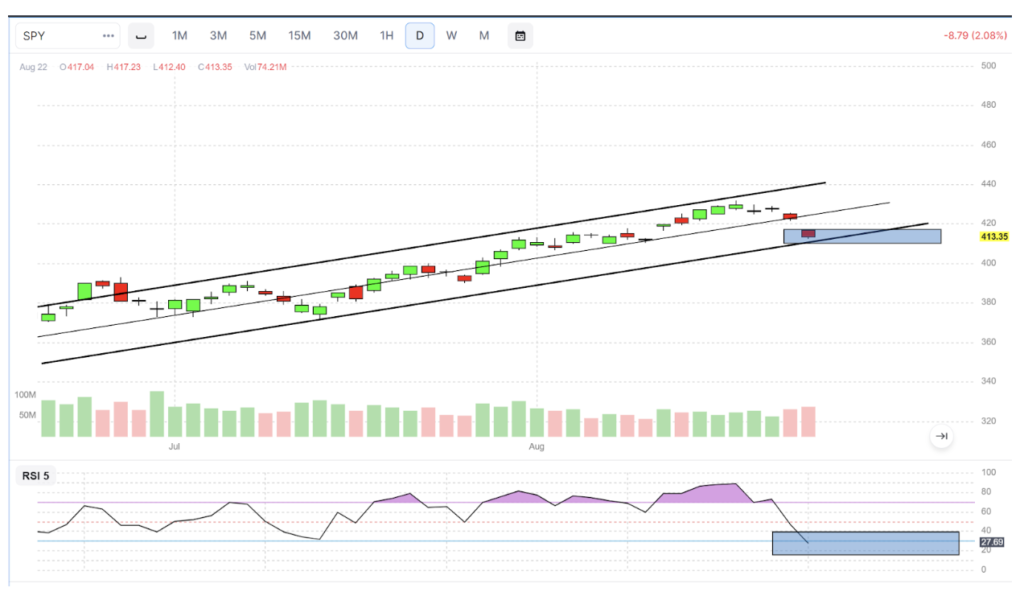 In the meantime, let’s chat about some trade ideas around Tesla (TSLA).

Tesla (TSLA) has a 3:1 stock split coming up on Thursday, 8/25. From the chart below, I think it will sell off into the split and then as more investors are able to afford a $300 stock as opposed to a $900 stock, Tesla will break out of the double top and move higher.

I’d look for it to fall to its support line around $850 for an entry. If you’re not as aggressive, you could wait for it to break out from the double top formation – around $930 (or about $310 after the split).
Why am I bullish on Tesla at the moment? Elon announced over the weekend that the price of Tesla’s Full Self-Driving system will increase another $3,000 next month, which is the second time that has happened this year. Musk is a businessman and he’s pushing the theory of elasticity in economics – that is to say, he’s pushing the price to see the responsiveness of consumers. It’s every brand’s dream – increase your prices and have your customers follow.

The entire automotive industry is slowly integrating subscription-based services and now Tesla owners who want Autopilot must face a $12,000 upgrade or pay a subscription of $199 a month. Assuming the average Tesla owner owns their vehicle for 6 years (72 months) and opts for the $199/mo option, they will end up paying $14,328.

Tesla’s owners are eating it up with seemingly no end in sight as to how much is too much to hand over to Musk. That means the $3,000 cost increase is just one of many more to come and despite a growing number of EV alternatives, Tesla is still on top.

As long as people believe that Tesla has the best self-driving technology, they will continue to pay for the Autopilot service and Musk knows it. He may tweet about it and blame it on inflation, but make no mistake, he will raise prices as long as customers keep

PrevPreviousIs It Time To Get Defensive Again?
NextCombining Indicators To Give You An EdgeNext