I’m tired of talking about the Fed but they are at it again. St. Louis Federal Reserve President James Bullard suggested the Fed’s monetary tightening campaign hasn’t done much against inflation to date. To be fair, the Fed has mentioned that these things take one to two quarters to cycle through.

But it seems, for now, the Federal Funds Rate will probably be going higher and there’s no formal announcement of reducing the next rate hike – the one thing the market decided should happen after the last round of economic reports showing that inflation may have peaked. The market hasn’t responded well to any of the various Fed member speeches this week.

What is fascinating to me is that despite the headlines of tech companies warning of, or issuing, mass layoffs, the jobless claims came in at 222k for the week ending 11/12/22, whereas the prior week they were 225k. Jobless claims were actually down! The job market seems to be resilient in the face of the impending recession. The four-week moving average of jobless claims did, however, tick up slightly from 218.75k to 219k.

I know some of you may have seen this already from John Hutchinson, but it’s worth another look. The 10-2 yield curve headed lower and not confirming the latest rally. 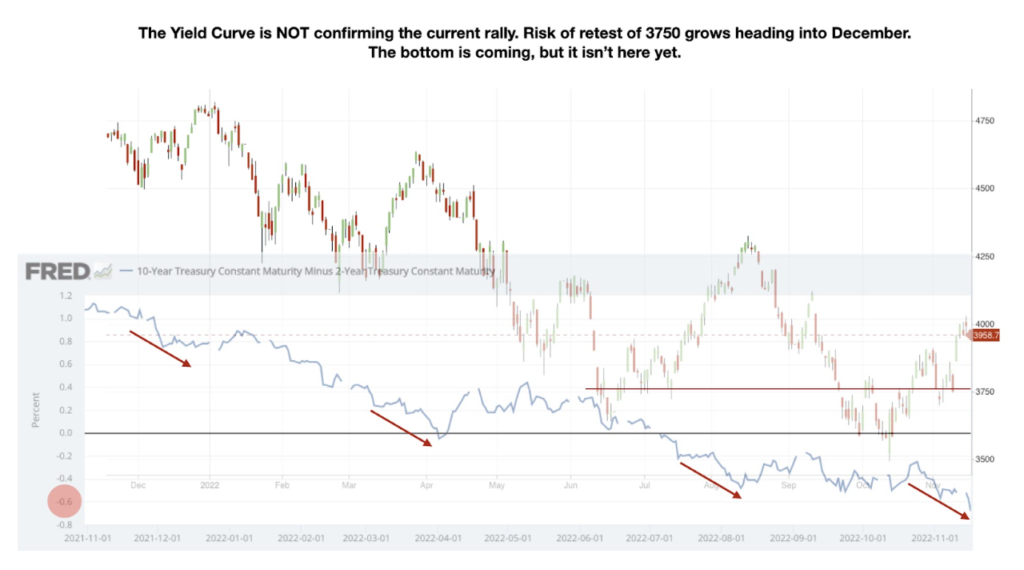 There may be some legs left in this rally though. I’ll show you why in a second…

Ok, so can the market still move higher from here? Here’s the SPY. We’re at a level of support, but we could see a drop to fill the gap that happened from Nov. 9th to the 10th. The market could fill the gap just under the support line and shake out the traders before resuming higher. That would occur near its 20-day exponential moving average – a potential level of support.

Here’s the DIA. Could we get a bounce off of the blue support/resistance line and head higher? The 20-period exponential moving average is my trigger line in the sand before I look for bearish trades in the Dow.

The Nasdaq is a slightly different story, although it did get above its 50-day and 20-day moving averages. A bounce off the averages would mean the current bear market rally still has some room for the upside.

There’s no doubt the chart of the 10-2 spread is raining on my typically-bullish-holiday-season parade, but if the Fed would stop talking, you may see the market drift higher on lighter volume going into the holiday week.

If the markets don’t hold their moving averages, I’ll be looking to load up on shorts.

Next week I’ll give you a trade setup for a calendar spread on the SPX. It is a favorite trade of mine before the Thanksgiving holiday, but you’re going to have to tune in next week.