The Cost Of Expansion

I wanted to start this week with a couple of quotes…

“Courage! We have been here before. Bear markets have lasted this long before. Well-managed mutual funds have gone down this much before. And shareholders in those funds and . . . the industry survived and prospered.”

“I have never seen a period where values placed on stocks had less to do with companies’ earning power and assets. It seems that everyone is focusing on the supply and demand for stocks and not on the underlying earnings power of companies.”

Would it surprise you to know these quotes came during the 1973 to1974 bear market?  It was a period that saw one of the worst stock market downturns since the Great Depression.

To continue the eerie comparison,  we are sitting on a 17% loss so far this year, GDP contraction, the edge of a recession, and a CPI number that has doubled since a year ago.

I know everyone is asking if we’re at the bottom yet, but the averages say we have a couple more months of selling pressure still to go. That certainly doesn’t mean there are stocks that have been beaten up already and prepping up for a bullish move. Later this week we’re going to look at some long-term stock plays and how you can profit from the next bull market.

Over the weekend I was looking at the chart for Freshpet (FRPT).

The stock recently broke through an area of support, then had a little four-day rally and started going back down again.  Was the recent move up a dead cat bounce (I didn’t come up with the name) or is the stock ready to recover?  If the market continues to sell off, I expect this stock to follow suit.  If you’re more conservative, you can wait to see if it breaks out below the recent low of $55.

And fundamentally the story isn’t better for the stock.  Its Earnings Per Share are down 54% quarter over quarter and it has a negative operating margin.  Sales are growing at a rapid pace, but their expansion plans are weighing on margins.  They are raising $350 million by offering a public stock sale.

This is a trade that you could look for short-term selling but it could eventually be a good time to buy for the long haul if their expansion plans come to fruition. 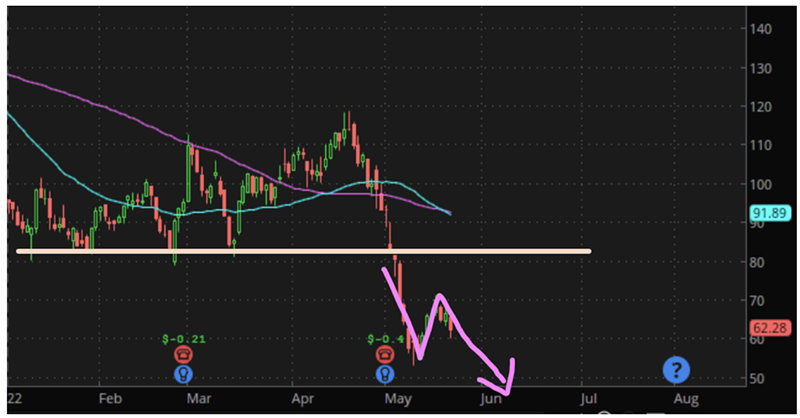