The End Of The Bear Market Is Now

The bear market is over! How about that for a bold statement? Before I get to my theory, let’s take a quick look at the week ahead to get you ready for a busy week of trading.

Now, let’s take a look at an indicator that has been used to predict the end of bear markets and see if you agree that the worst is behind us.

Why do I say the bear market is over? I am going to use something called the Fibonacci Retracement tool. If you take the high from early 2022 and the low from mid-June, you can see that we’ve marched up to cross over the 50% retracement level. I’m using the S&P 500 ETF, SPY, as shown below.

Go back through history and look at every time we’ve entered a bear market, a decline of 20% or more from the previous high, and then draw a Fibonacci Retracement (available on all major charting platforms) from the previous high to the bear-market low. Every time the S&P 500 comes back up and crosses above the 50% retracement level has shown an end to the bear market!

Once it crosses the 50% retracement level, it starts a new bull market and is higher a year later. Of course, that could change this time around – it’s not like there’s a lot of data about coming out of a pandemic.

Ok, I know you’re saying, that’s easy to go back and do because you now know what the low was. How would we do this in real-time? Once the market enters bear territory, you draw from the high and keep moving the lower point of the drawing every time the market makes a new low.

I’ll show you how you can do this. 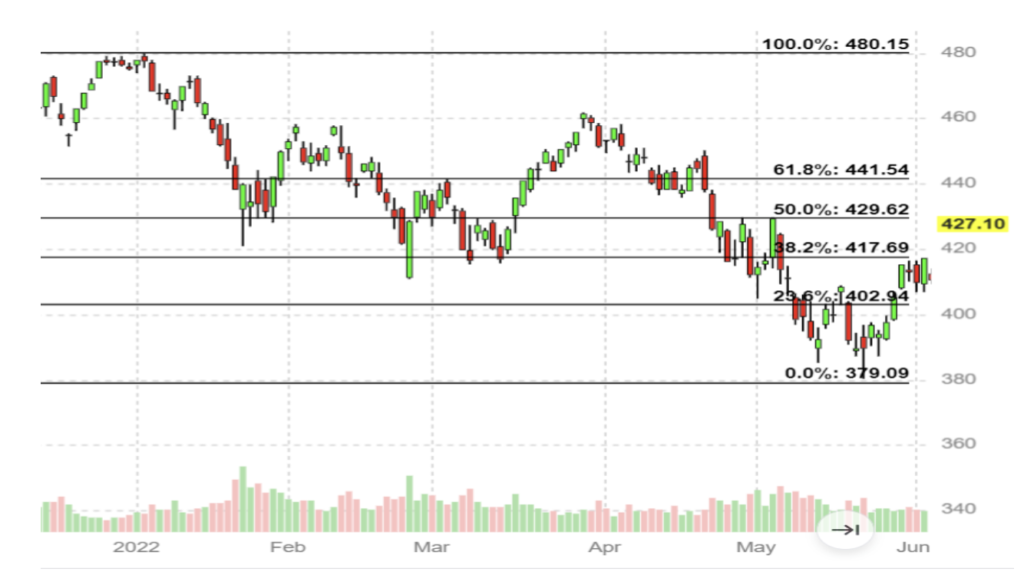 Mid-May is when we officially lost 20% from the high. Draw the retracement level to the known low at that time. The 50% retracement level was $429.62. We never got close to that level before making new lows. You can see from the chart above that we stalled out at the 38.2% level.

As the market made new lows, you would redraw the lines using the retracement tool.

Now let’s take a look at the first chart again.

After redrawing the Fibonacci Retracement using the new lowest-low, the 50% retracement level moved down to $421.42. Now that we’ve retraced by 50% from high to bear-market low, I’m calling the end of the bear market and the start of a new bull market.

How far do we go from here? My price target for the SPY is now $448, or around 4483 on the SPX. That said, I still think we’re overbought at these levels and won’t be surprised if we have a pullback before marching higher.

What do you think? Do you agree? Or are we going to retest the lows? Go sideways?

PrevPreviousWhere Is The Market Headed 3 Months From Now? This Indicator Gives Us A Clue
NextThe Distortion Of Retail SalesNext