The Producer Price Index came out at 8:30 am yesterday and the market responded favorably. Overall the results were positive for the market. The number that the Fed likes to look at is the Ex-Food & Energy Y/Y and you can see from the chart below that it’s showing the core rate decreased from 6.2% in November to 5.6% in December.

The market gapped up at the open and the S&P 500 came close to the 4015 high we saw yesterday, but then it reversed and wiped out about an hour later.

Part of the reason came from retail sales (excluding vehicles). The month-over-month data came in less than expected at -1.1% instead of -0.5%, which is showing a slowdown in retail sales. Remember, that’s December’s data too, which includes the holiday season.

Then you had another report released about Industrial Production that showed a significant decrease in production output month-over-month from November to December. The consensus was -0.2%, but instead, we got -1.3%.

Put it all together and the market got spooked over recession fears. I think there’s a little more to it though. The market was overbought last week and I think you had some profit-taking in combination with the negative reports.

Maybe it’s coincidental that the S&P 500 was running up against the 200-day moving average and a long-term resistance line. At the moment it appears as though the market is not quite ready to overcome the long-term trend.

As far as the chart goes, we need to pay attention to the fact that the long-term trend is down with lower highs, but since October we’ve also been experiencing higher lows. The market is getting ready for a break in one direction or another and as I mentioned yesterday, I think we will continue to wedge until the next Fed meeting, and then we will get our breakout.

The folks around the office are going to cringe when I name the stock idea of the day because we don’t have the best track record with this ticker. We’re going to call this a high-risk trade, but there’s still some good educational content in here.

The trade typically makes money due to the fact that the option you sell has a higher theta than the option you bought. As long as the stock doesn’t move too far in either direction, the theta decay of the sold option will make the trade profitable.

The risk profile of a calendar spread looks like a tent. 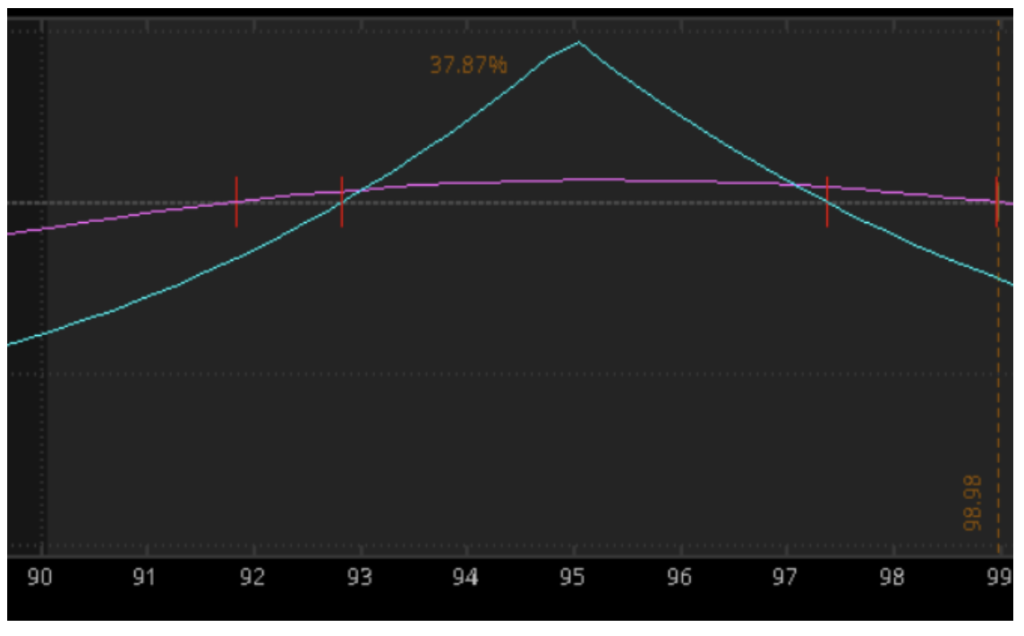 Ok, so why would I use a calendar spread prior to an earnings event? Why not use something else?

If volatility levels rise after the trade is entered, the risk curve will shift to higher ground—and the breakeven points will widen—as a result of the fact that the purchased option will increase in price more than the option that was sold. This occurs as a function of volatility.

As a result, it makes sense to enter into a calendar spread when the implied volatility for the options on the underlying security is toward the low end of its own historical range. This allows a trader to enter the trade at a lower cost and affords the potential for greater profit if volatility subsequently rises.

We know the Volatility Index (VIX) of the market just hit a 52-week low and is rising after yesterday’s selloff and we also know that volatility increases as we get closer to earnings, therefore I’m looking at a calendar spread as a trading strategy for this trade.

The ticker is Disney (DIS). They report earnings on February 8th, but I want to be out of the trade before then.

DIS hit a long-term resistance line and came down with the rest of the market. The Williams%R is overbought and showing this stock is heading lower. There’s support at $95, right around the 20-day exponential moving average and the 50-day simple moving average.

You can see to the right in the picture below that the implied volatility jumps between the 3 FEB and 10 FEB expirations and that is from earnings on February 8th. So we’re going to sell a 3 FEB option while buying a 10 FEB option.

Which strike price do we choose? The risk profile is a tent, with the most profit potential coming at the strike price you use. In this case, I think DIS is headed lower to $95 from here, so I am looking at a trade setup like this: 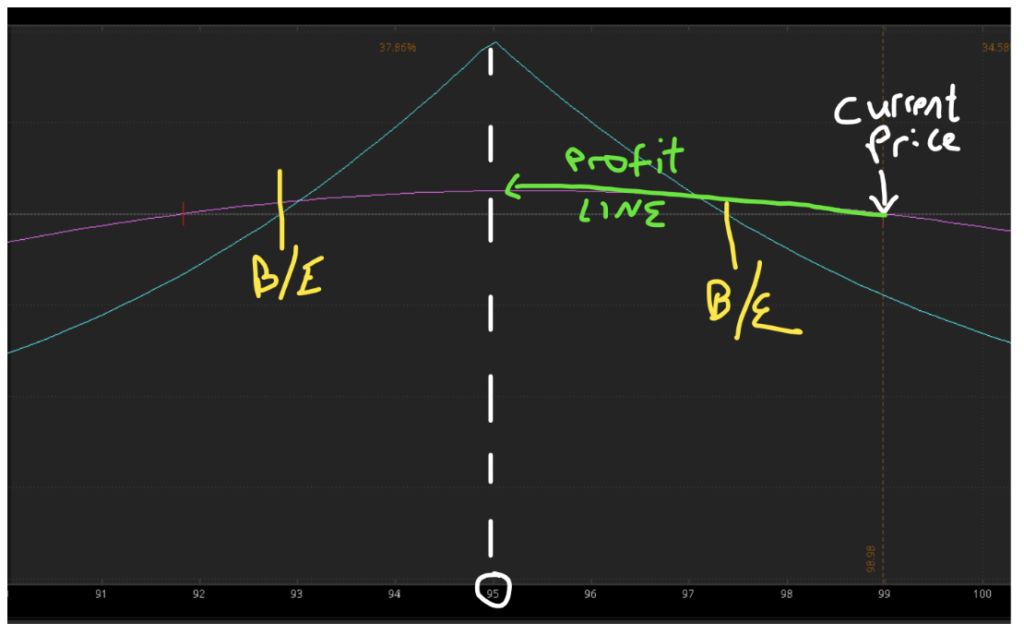 I am setting this calendar up to be away from the current price and toward where I think DIS is likely to go before earnings. If DIS keeps falling, my profit line will increase the closer it gets to $95 and the more time that goes by (and volatility increases).

I’ve marked the breakeven points and you can see that I’m setting the trade up outside of a breakeven level. That means this trade will start to lose money the moment DIS moves higher instead of lower.

This trade is dynamic, meaning the max profit and break-even lines change as option prices change. I’d like to make around $30-40 in profit off of the $127 investment. That would be as high as a 31% return in a few days.

That means I need to have a tight mental stop loss though. I’m already trading with a bearish bias, so if DIS heads higher, up to $101.50 (higher than its most recent high), I’m going to say I was wrong about the direction and bail on the trade. If I go out to that price on my risk graph, I can see the loss would be $50 if DIS goes up to that level today. It’s not perfect, but it’s close to a one-to-one risk-to-reward trade.

If DIS reverses direction when I’m looking to place the trade, I will bail on the idea or maybe adjust the strike price up from $95 to $96 or $97, but I don’t want to chase the trade if I’m wrong in my theory about the stock heading lower prior to earnings.