The so-called Santa rally is looking like it may not happen this year.  That would make sense given the rest of the year.  Strong job reports mean too much inflation and the markets go lower.  The price of eggs only went up 25% from last month instead of 50% and the market trades higher.  It’s just been one of those years where abnormal became normal.  And that’s why that Santa rally may be in question.

Historically speaking, if the Santa rally doesn’t happen, look out for a bear market in 2023.  The failure of a rally from December 23 to January 4th has preceded bear markets in the past.

But this chart is saying there’s still a chance!  Where could we rally to though?  Here’s a chart of the S&P 500 futures.  It looks like we’re hitting a 50% retracement level and could finally reverse and head higher from here.  The average gain of the Santa rally is about 1.5%. 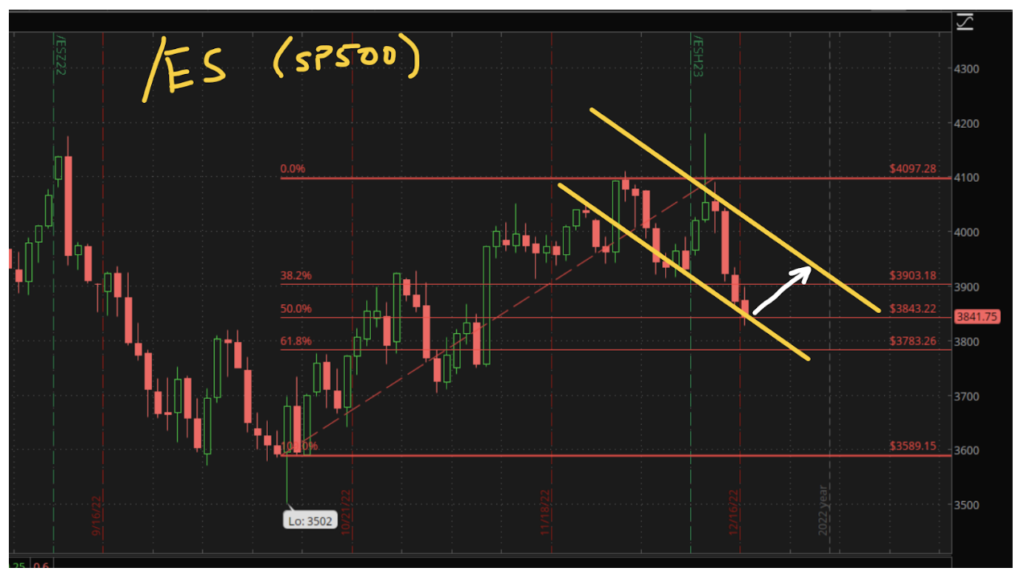 So a rally may come after all. Call it Santa or a retracement to support, but there’s a chance.

Beyond the new year, a break below 3783, the 61.8% retracement level, would put an end to the previous short-term up trend. It starts getting ugly after that.

Now let’s take a look at some new trade ideas.

With the end of the year approaching, hedge funds need to clear the books and remove the underperformers. Retail traders do this as well for tax loss purposes. The selling of already-beaten down stocks gives us an opportunity to pick up some stocks at fire-sale prices.

I’m looking at stocks trading at 52-week lows near the end of the year, trading at higher-than-average volumes, and trading down by more than 60% from their 52-week high.

This wide-open scan gives you a lot of options, so this is just a start for some ideas. By the way, you can argue that they’ve lost their value due to valid business reasons, so it’s always best to do your research, but let’s just go by the numbers for now. Here are three that I’ve heard of before.

Emergent Biosolutions (EBS) has dropped more than 78% from its 52-week high and is currently trading around $11. The 17 MAR 23 options don’t have a lot of open interest, so this would be a stock-only play.

Lending Tree (TREE) is another one that dropped over 85% from its 52-week high and is now trading around $19.46. The further-dated options don’t have a lot of open interest at the moment, so I’d look at this as a stock play.

My goal would be for a quick profit and to exit no later than the first two months of the new year. Normally I like setting up 20-25% stop losses on stock plays, but that can be too much in a bear market. I’d look at maybe a 10% stop loss instead.