The Market Is Coiled And Ready To Explode

The Dow 30 has been on an absolute tear lately, helped by strong earnings from companies like Caterpillar (CAT) and Mcdonald’s (MCD).  Here’s the Dow 30 ETF, DIA.  Two weeks ago we were at $290 and we’ve been marching up non-stop since then.  Unlike some of the other indices, the Dow has crossed over the 50-day and is now slowing down at the 200-day average. 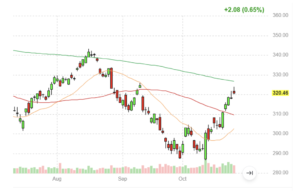 You could argue that people want the safety of the big dividend-paying stocks, but it feels different.

You had some of the major tech companies report earnings this week and the results were less than stellar. Facebook (META) took a faceplant and fell nearly 25%. Alphabet (GOOG/L) and Microsoft (MSFT) fell around 10%. Yet, look at the chart for the S&P 500 (SPY).

Some of the largest tech companies in the world fell apart this week and the S&P 500 barely moved. I could see the S&P 500 retreat from these levels for a quick breather, but overall the market shrugged off the news about tech.

To me, that means the market is waiting for any catalyst to get going long again. This morning we got the Core PCE number and next week we hear more from the Fed about future rates.

The market is coiled and any good news from the Fed will send this flying higher. Although any indication that the rate hikes won’t slow down will completely destroy the party we had going and we could slam quickly back down toward the recent bottom.

I have a trade idea for you based on the stocks that were beaten up this week.

Chris and Dave from Traders Reserve discussed trading tactics at the Millionaire’s Trader Club event recently and that got me wondering if we could apply a strategy to the tech stocks that were severely beaten up this week.

Here’s a chart of Microsoft (MSFT). 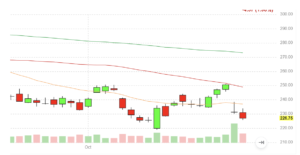 Now, if you believe that after earnings Microsoft took a really big loss and it didn’t deserve to lose 10% of its value in one day, we’re going to set up a bullish trade. I like to look at stocks that have lost 10% or more in a day due to a bad earnings announcement.

My theory is to place a contrarian trade on stocks that lose too much, too fast. Now, you could say the stock tanked for a reason. If that’s what you believe, this trade might not be for you. But if you think the earnings announcement caused an overreaction, here’s something to paper trade and test.

We start by selling two at-the-money calls. The current stock price is $226.75, so let’s look at selling the $225 strike price.

The problem with selling calls is that it has an unlimited loss potential. Yikes! So we now need to buy two calls to act as our insurance – to protect us from that unlimited loss.

Since we’re bullish on Microsoft in this example, I’m going to buy the next strike price up from the call we sold. So I’ll buy the $227.50. I’m then going to go down $5 and buy another call.

You now have a risk graph that looks like this – we made a broken-wing butterfly. 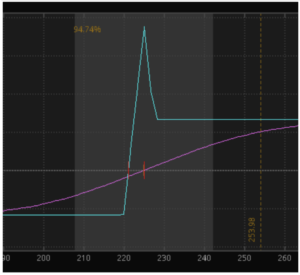 You now have a risk-defined trade to the downside, with no upside risk.  As long as the stock moves up from $225 in the next 14 days, this trade will be profitable.

Why not buy a long call instead?  The $225 call is going for $8.50, so the stock would need to move up to $233 before the trade is worth it.  With the butterfly we created, you have a wide profit potential range in exchange for capping off your max profit.  Our breakeven is at $221.15, which is near the previous swing low.

The butterfly will only require $118 in capital to place the trade and it has the potential to win $132 or, if the stock remains at the current price (unlikely), you could make as much as $360 (peak of the teal line above).  You can also profit from time decay with this trade.

Now, if you like this trade and want to know more about how to trade them, I urge you to purchase the Millionaire’s Trading Club recordings, where Chris and Dave walk you through different options tactics that you can use to trade in these market conditions.

You also get two full days of speakers giving you trade ideas, actionable trading plans, and even how to repair trades that go against you.

Here’s a quick rundown of the two days.

Chris and Dave talk about trade ideas and repair.  Haley gives you tips on how to ask for more from your trades, how to trade credit spreads, and what you should be asking your money manager.  Jerry answers the tax questions you may have about starting up a trading business.  Michael gives you trade ideas for how to sell silly puts for potential weekly income, and lastly, I give you a complete trading strategy with all of the rules – soup to nuts!  I’ve had several people write to me already and tell me how simple it is to follow and how they’ve already started using it this week.

I hope you all have a fantastic weekend!  Halloween is coming up… are you ready?