From “A Few Good Men”

One of my favorite lines from the movie, A Few Good Men, seems to sum up the stock market since November:

“And the hits just keep on comin’”

If you feel like you just can’t watch the markets one more day because every day brings more bad news, well, I have bad news and good news.

First the bad news (might as well pile it on, right?)

The yield curve collapsed again on Monday, March 7, falling 10 basis points from .30% to .20%. This is getting into the danger zone of inversion, and inversion implies recessionary events on the road ahead. 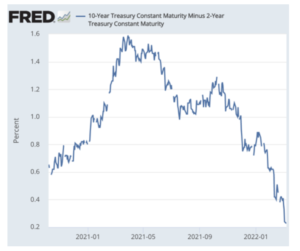 Remember, however, that IF the curve inverts it takes 6 to 18 months before recessions occur (historically).

I would argue, from the good news category, that the compression is fully due to the economic consequences, which are unknown, of Russia’ invasion of Ukraine.

If or when a peace deal materializes, do not be surprised to see the curve rise and trend back toward .6% (the last real support line).

Three things that matter to you as an investor or trader: Thursday’s CPI report; Q1 GDP (April) and Q1 earnings (April)

Now, one report does not a trend make. It does ease the pressure on the Fed to run out the .5% increase in interest rates that some are predicting and increase the probability that the Fed raises rates by .25%, instead.

The CPI report is likely to show continued inflation – perhaps even higher than the January report; how much higher is what matters. Inline or meeting previous highs also will decrease the probability of the Fed raising interest rates by the .5% level.

Q1 GDP (consumer spending) and Q1 earnings will go a long way to restoring balance in the S&P 500 and NASDAQ. We need Q1 GDP to meet or beat expectations – I don’t have a feel for this yet but will be researching it. Q1 earnings need to increase expectations for growth in 2022 and beyond.

We need some clarity on events that have run away from us. Those “hits that just keep coming.” Without that clarity – from the Fed’s action this month to economic results – the market is too likely to continue its whipsaw action.

You can’t trade that kind of action efficiently. Which means, saving cash for when we have more stable markets is critical because you’ll be able to attack the markets on the upswing.

But, it takes patience. We’ll do our best to help you be patient.