The SPY made an attempt to retest the low from a few days ago, but there’s still talk about a relief rally coming rather than heading lower. We had one last week and gave up 80% of the gains already, so the real question will be if another relief rally is coming or if that was it. That said, volume was so low today that it’s hard to determine what will happen next, but we should get a better idea later this week.

Volatility is on the rise and the VIX is inching closer to the levels in early May and mid-June when the market hit new lows. Here’s a chart with the VIX on top and the SPY below, showing the spike in the VIX with the lows in the SPY. Remember, the VIX and SPY tend to move opposite each other. 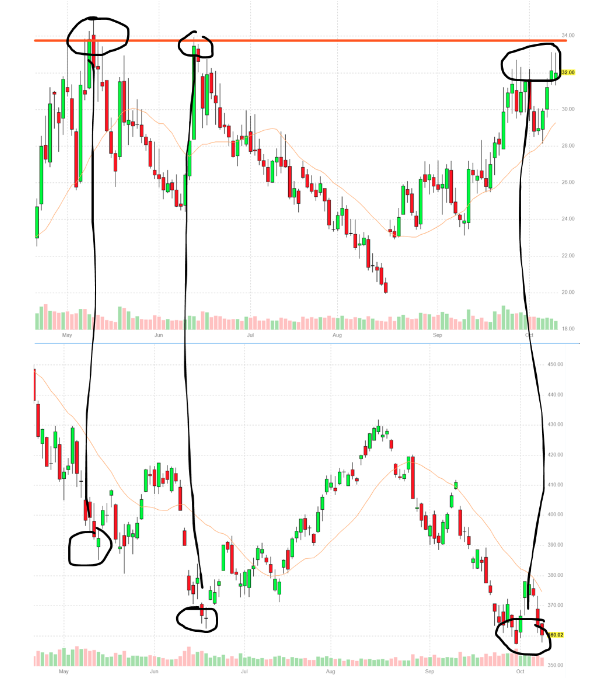 In both charts, the orange line is the 20-period simple moving average, and you can see that both charts are following those quite closely. That is the one indicator I would use to determine your resistance levels for any relief rally.

I’ve mentioned seasonality before and how starting in the second week of October we have historically had a positive next 14 weeks.

A break above the trend line connecting the recent tops could signify another move higher. PBR is in the Energy sector, which has been in a bit of slumber due to a rising recession risk and some positive progress in the Russia-Ukraine war. However, I think Energy will be back on the rise soon as some economic data is indicating that a deep recession can be avoided and the Russian-Ukraine war will continue as Putin won’t accept defeat and go quietly into the night. Both of these are positive signs for Energy.