Three Stocks Ready For a Breakout!

We’ve all been reading the negative stories this year.  There has been unrelenting selling in the market,  international conflict, inflation, recession, and everything in between.  We don’t want to report on what you already know.  We want to make sure we’re looking ahead, and I found an interesting pattern emerging in a specific sector that we should be watching closely.

Now, it’s easy to get wrapped up in euphoria after the bounce we had on Friday.  We’ve seen this pattern before.  The market has a solid up day only to be met with a week of selling right after, so we have to be cautious, but there’s a reason why this time might be different, at least for a certain sector I have an eye on.

At the end of April, the Semiconductor Industry Association (SIA) announced worldwide sales of semiconductors totaled $151.7 billion during the first quarter of 2022.  This was an increase of 23% over the first quarter of 2021, but a 0.5% decrease from the fourth quarter of 2021.  Yet some of the major players in the space have struggled mightly over the last six months.  NVIDIA (NVDA) is down 41%, Advanced Micro Devices (AMD) is down over 35%, and Marvell Technology, Inc. (MRVL) is down over 21%.  Full disclosure, I own shares of NVDA.

Revenue in the industry is up from the same quarter a year ago and only slightly down from last quarter, yet this industry has been caught up in the broad market selloff.  With a chip shortage that is estimated to continue for the next one-to-two years and demand for chips growing in several industries, consulting firm Deloitte forecasted semiconductor sales to grow 10% to more than $600 billion in 2022, which follows an increase of 25.6% in 2021 and 6.8% in 2022.

There’s also a technical chart pattern emerging that may be saying three semiconductor stocks have had enough selling.

On May 10th, Taiwan Semiconductor Manufacturing Company (TSM) reported their first-quarter revenue was up 55% year-over-year and they are planning on price hikes in 2023 that will be passed along to their customers.  They reported that the demand for chips continues to grow from emerging technologies like data centers, artificial intelligence, and machine learning.  Let’s not forget the Metaverse, either.  There are three stocks that interest me more than TSM though.

What caught my attention is a similar technical stock pattern emerging in other semiconductor stocks. 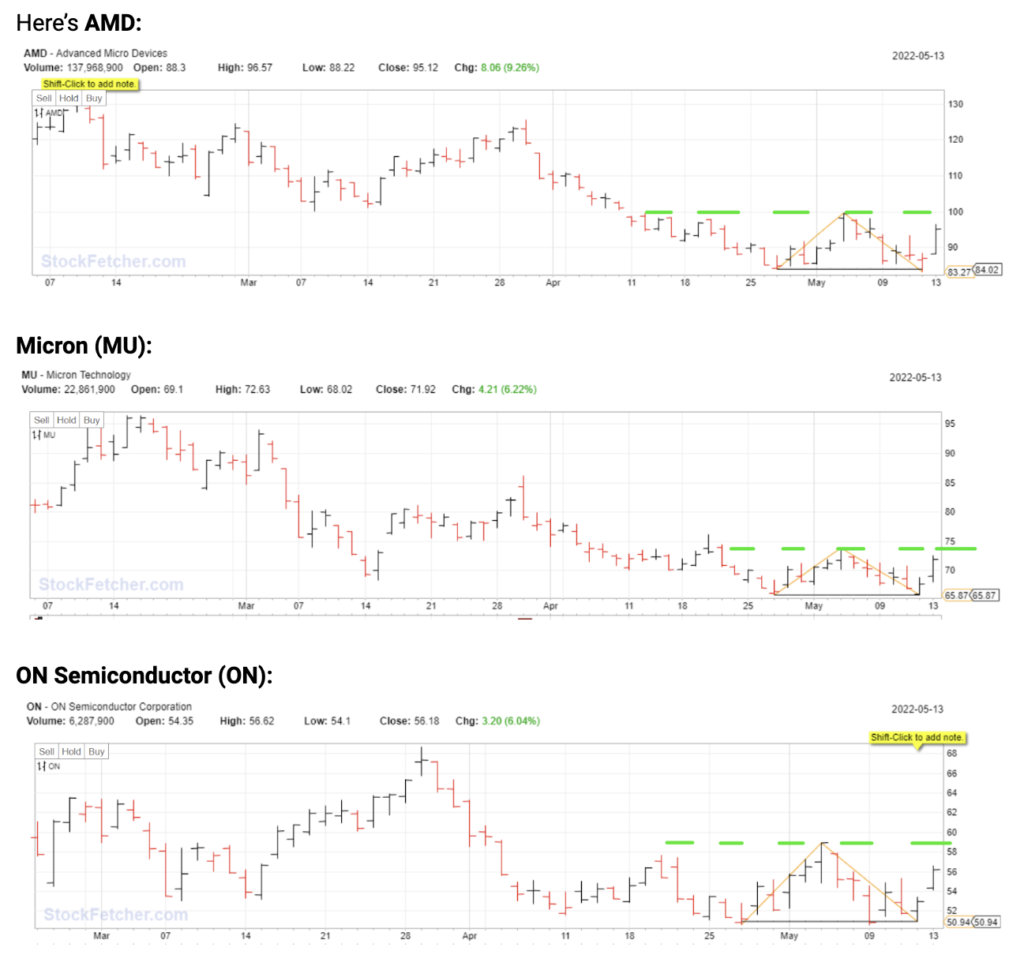 The charts may be difficult to read, but all of them show at least a 6% positive move on Friday, and all of them have the beginning of a double-bottom pattern or at least a period of consolidation and could be poised for a breakout.

If we can break the broader market pattern of 1-day euphoria followed by a steep sell-off, and we can get some sustained upside movement this week, we could see the potential for double-digit gains in these three semiconductor stocks.