Before we get too far, I wanted to remind you that Millionaire’s Trading Club recordings are still available for a limited time.  These two days of presentations give you actionable trade ideas, setups, and systems that you can implement right away.  My session includes an entire trading system with the exact entry, exit, and timing rules for you.

The two-day event covered topics like trade repair, a 4-day trade system (mine), a 7-day trade and 28-day trade setup, and more!  We even had a guest speaker answer questions about taxes specifically for traders like us.  There’s great content for all different types of traders, and we made a big announcement about a project that I will be launching with Haley Bjorklund in November.

Ok, on to the markets.

There was more market indecision in yesterday’s trading, but I want to look forward and see what’s next.  The next big announcement will be the Fed’s decision on interest rates next week.

The market seems to be betting on a pause from the Fed, or at least lowering the amount they will increase rates.  Maybe we’d see a 0.50 increase instead of the 0.75 hikes we’ve been seeing.  A complete pause is unlikely, but even a reduction could pump optimism back into the market.  Another 0.75 rate hike could cut this party short.

I’ve mentioned the 10-year Treasury yield a number of times lately.  It pulled back to 4% and is sitting on the 20-day moving average, which has been acting as support since August. 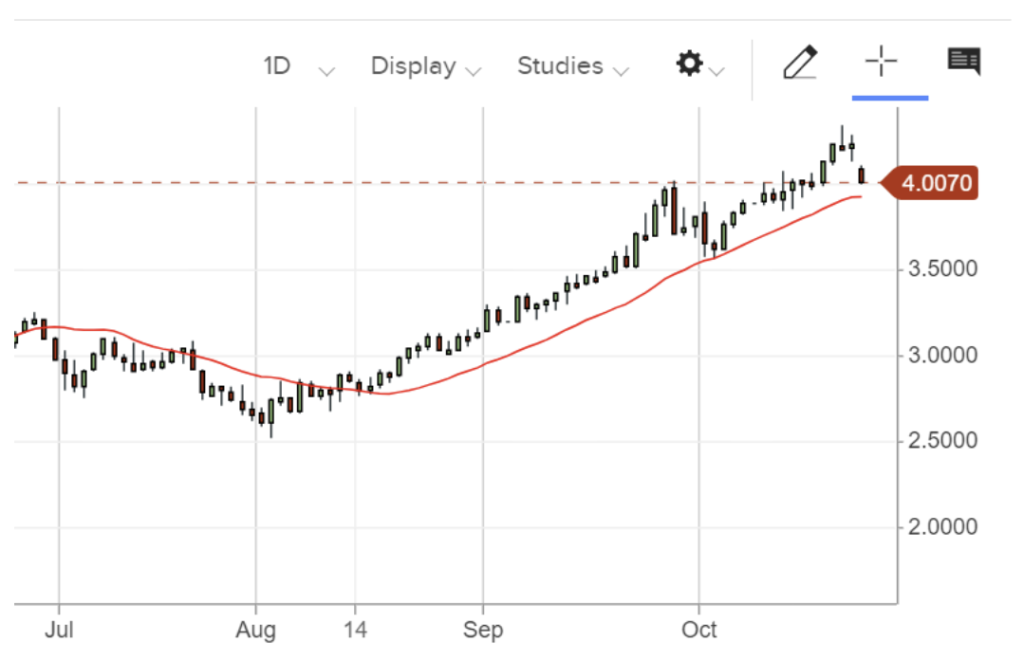 The 10-2 yield is still inverted, which has previously served as an early warning sign of a future recession. But we all know coming out of two years of a pandemic is a different type of recession. So far everyone is talking about a slowdown in growth, but we haven’t seen the job market affected like in previous recessions. At least not yet.

What’s wrong with tech earnings? Why did they stumble?

Tech has been in the spotlight this week as some of the giants reported earnings and discussed slowing ad growth due to companies reducing their ad spending, indicating that a recession or a global slowdown of some sort is around the corner. I think it’s their way of saying they were completely caught off guard that people would rather spend time watching 20-second videos on TikTok than longer format pieces on YouTube.

Even Zuckerberg from Meta (aka Facebook) said that he underestimated TikTok because he was convinced that people wanted to watch content from their followers, but admitted that people want good content – no matter which user it comes from.

No, I don’t really believe that TikTok is the cause of these companies missing earnings, but the subscriber growth of TikTok compared to the attrition rate of YouTube is important to keep watching.

When 22% of the S&P 500 weighting belongs to 5 companies and over 26% of the price comes from the IT sector, it is at least worth mentioning some outside forces that are cutting into advertising dollars. Fewer consumer eyes on your platform equal less ad revenue and TikTok is taking away market share from the giants at a good clip.

The QQQ ETF, representing the Nasdaq 100, lost momentum and is near a resistance level at the 50-day moving average (red line).

Ok, let’s finally get to a trade idea.

The iShares Biotechnology ETF (IBB) typically has a strong fourth quarter – looking back over the past 19 years of stock performance, it has risen an average of 7.03% over the next 12-week period. The stock rose in 16 of the last 19 years during that period, giving it a historical accuracy of 84.21%.

Are you willing to risk $235 to potentially make up to $530 on a stock that has moved up 16 of the last 19 years over the next 12-week period? If you get into this trade, let me know how it goes in a few weeks!