If the last three days haven’t been tough enough on investors, we have a new week with new reports you should be aware of.  So without further ado, let’s get started.

Tuesday – PPI Demand.  This is the Producers Price Index, which measures the price changes for goods, services, and construction.

The year-over-year consensus is an 11% increase, which would match the y-o-y increase we had last month.  However, the PPI number is set to increase month-over-month from a .5% gain to a .8% gain, showing prices are continually rising.

If you remove food and energy from the PPI, the consensus is an 8.7% increase in prices year-over-year this month, but it would show a number slightly lower than last month’s y-o-y report of 8.8%.

Wednesday – Fed Day! First, we have retail sales in the morning.  Retail sales are supposed to come in with an anemic month-over-month gain of 0.1%, a far cry from last month’s .9% reading.  Most of the decline can be attributed to vehicles and gas sales.

The Fed is expected to announce a .5% hike in interest rates again on Wednesday.  That has been planned and mostly priced in, but after that, all bets are off.  Bigger rate hikes could be in the cards in the coming months.  There is an off-chance that they raise rates by .75% to show they are being aggressive towards out-of-control consumer prices.

Thursday – Housing Starts and Jobless Claims.  The housing market is set to report weakening numbers while the jobless claims are set to decrease from last week’s highest reading since January 15th of this year.

Friday – Powell speaks (pre-market).  There’s also the Industrial Production report, which is set to show a slowdown in industrial manufacturing.

Despite the number of reports out this week, all eyes will be on the Fed on Wednesday.  The market may rally on some indication the Fed is going to be aggressive in dealing with inflation, but so far we’ve seen a rally on the day of the announcement and then the market gives back the gains over the following days.

Today I want to talk about oil and discretionary spending.  There’s a point when consumers will say enough is enough and stop spending their hard-earned money.  Right now consumers are dealing with higher interest payments on credit cards, homes, new car purchases, and more.  If the economy goes into a recession or stagflation, will the jobs market also fall apart?

As consumers become uncertain of economic conditions, they put off major purchases and start to watch their pocketbooks more closely.  As the economy unwinds, crude oil prices also collapse.

So, if that’s the case, can we look at discretionary spending and see if we can figure out when oil will start to fall and when we might see a bottom in the market?  Of course, this time is slightly different due to the war in Ukraine, but it’s worth a look.

Keep reading to see if discretionary spending and the price of oil are correlated and if we can pick a market bottom.

Let’s travel back to 2007 for a moment.  This chart compares the US Consumer Discretionary ETF (IYC) against the Crude Oil futures contract.  The IYC is on top and crude oil is the purple line below it. 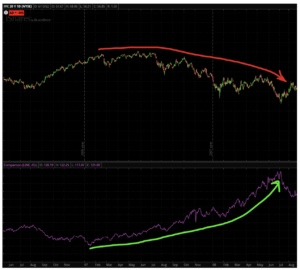 As you can see, discretionary spending was flat from March to July and started to sell off.  Meanwhile, the price of crude continued to accelerate, even at a parabolic rate heading into its peak in July of 2008.

There was a disconnect between consumer spending and the price of oil, and eventually, that led to a crash in the oil market.

The price of oil peaked at around $140 and fell to less than $40 by the start of 2009 (purple line in the chart below).  As the economy was going through the housing crisis, discretionary spending continued to pull back as well (upper chart).  The IYC lost 54% from peak to trough. 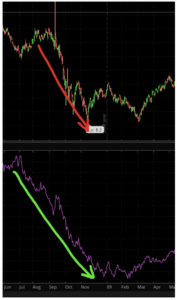 Then the market hit a bottom and both discretionary spending and the price of oil started the climb up, together, in lockstep. 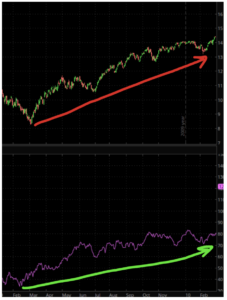 Ok, so now let’s go back to the future.

Here’s where we are now. Look familiar?

I’m not sure we’re going to make a bottom until we see a major pullback in oil.  Last time it took about 6 months for oil to go from peak to trough.  That means we could see discretionary spending keep heading lower for another 6 months before the two charts go back to traveling back up in lockstep.

Does it have to take 6 months?  Of course not!  And maybe this time will be different, but the charts are too similar to ignore.

The other interesting thing on that chart is that the IYC is now below the pre-pandemic high.

There are a couple of support lines on the IYC chart, but we’re showing that the sector has more downside potential.

You can trade this ETF, or the XLY, or take a deeper look into the companies that make up the sector to see which ones are more likely to lead the group lower.