What can we learn from the major companies that reported earnings?

We had a short squeeze last week and saw 7 days of higher highs and higher lows, so it seemed like the market was ready to put in a new up trend, right?

I went through Alphabet’s last 8 quarters of earnings and if the after-hours trading stays where it is now, a modest 2.43% move on an earnings miss will be one of the more muted moves in recent earnings history.  The other day I wrote that the market seems to be more forgiving to companies that miss and less rewarding for beats.  Sure, there was SNAP and WMT fell 7%, so there are exceptions.

While companies are lowering expectations for the next quarter, they also seem to be saying they are better prepared for a recession and they are not expecting the recession to as bad as 2008.  But if you’re reading the earnings, they certainly aren’t saying we’ve hit market bottom and we’re ready to soar from here. We’re muddling.

We have more mixed fundamental and technical data than anything.  And later today, the Fed will speak and more than likely give us a 75 basis point increase in interest rates.  What they are doing is working in some areas as New Home Sales sank to the lower edge of expectations and well below the numbers from last month.  Consumer Confidence also sank to the lower edge of the expected move.

But there is something that can push this market higher as early as next week!  Want to know what it is?  Keep reading…

There is something that can start driving this market higher.  The removal of uncertainty.  As Chipotle (CMG) and others give a positive outlook and once the major players in the market are done with earnings, we could see the market breathe a big sigh of relief that the top CEOs aren’t expecting a major collapse anytime soon.

Where does that put us from a chart perspective?  Well, keep in mind this is being written before the Fed meeting so things can change quickly, but I’d look for three support levels for us to turn around.  I’m looking for a bounce at $385, $382, or $376 on the SPY.  A sign of a continued up trend would be as long as we get a bounce at any one of these levels, especially if we can stay above that purple downtrend line. I fully expected a pullback after a 6+% gain, but the test will be how much we pull back.

The last time the Fed spoke, we had a 1.5% bump in a day, only to give all of that back and then some.  Remember this two-day period last month? 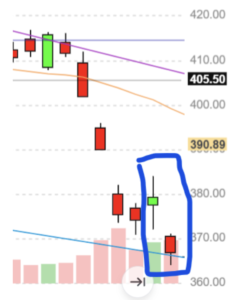 If we have another two-day period similar to that, we would be around $383 by the close of this Thursday. That would put us in the yellow highlighted area on the chart below. As long as we don’t drop below that level with any type of followthrough, we would see the previous uptrend remain intact. Keep in mind this isn’t an exact science. We could certainly see rejoicing from a Fed announcement and never get close to the yellow area, but I will be concerned if we break below this area. In fact, that level could be a great point to place some long trades if we can bounce off a new support level (blue line).

If you look at the chart above and you agree with the analysis and are determined to put on trades during Fed announcements and major earnings announcements, I’ll give you a potential trade. Personally, I prefer to avoid trading during weeks like this, but I know some of you are looking for trade ideas. Do your own due diligence, but here’s a way you could play this. Here’s the SPY, and forgive my drawing, but I drew an iron condor tipped on its side (orange lines). 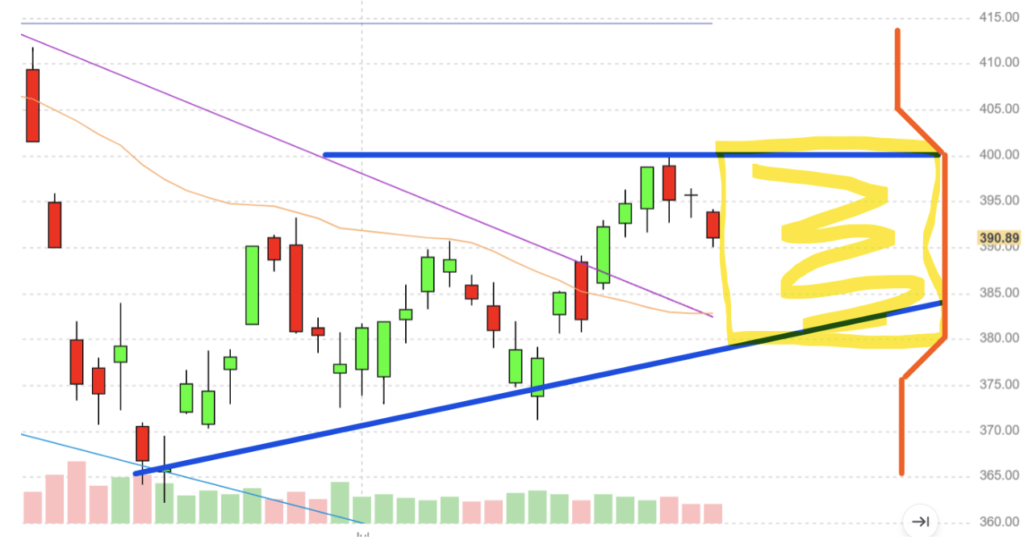