Or was it just me? That is all that represents my covered calls against TWTR and my shares have all been liquidated just days after Elon Musk took over the company, which will officially be delisted by Friday. What’s next after the dust settles?

Musk is taking inspiration from the Chinese and wants to use Twitter as a platform to build a super app, similar to WeChat run by Tencent. The concept for the super app is a one-stop shop for all your mobile needs. From messaging to ordering a cab, or even mobile banking, the super app would eliminate the need for multiple apps for different functions.

Spending the amount of money it will take to build an app like that can be done – again, it’s already done in China and other countries. Getting the public to trust a super app run by Musk is going to be another hurdle, and yes, he will tell us all of our information is secure and not really shared, etc.

But I still think Twitter is dead in six months, even without the super app concept. Why? Well, in a weird way – free speech.

Then there’s the announcement that General Motors (GM) just made about the platform too.

What is GM doing with Twitter now that Musk took over?

Musk has said he wants to reduce the barriers in place on Twitter and allow for free(er?) speech. That sounds good, right? He wants to eliminate Twitter’s content rules so people will be able to say whatever they want, but that’s what will make it an irrelevant platform soon.

Why have the younger generations been leaving Facebook in droves? In 2014-2015 Facebook had 71% of teens using the platform, but that number has dropped off a cliff and is sitting around 32% now! That’s not the demographic you want to lose. 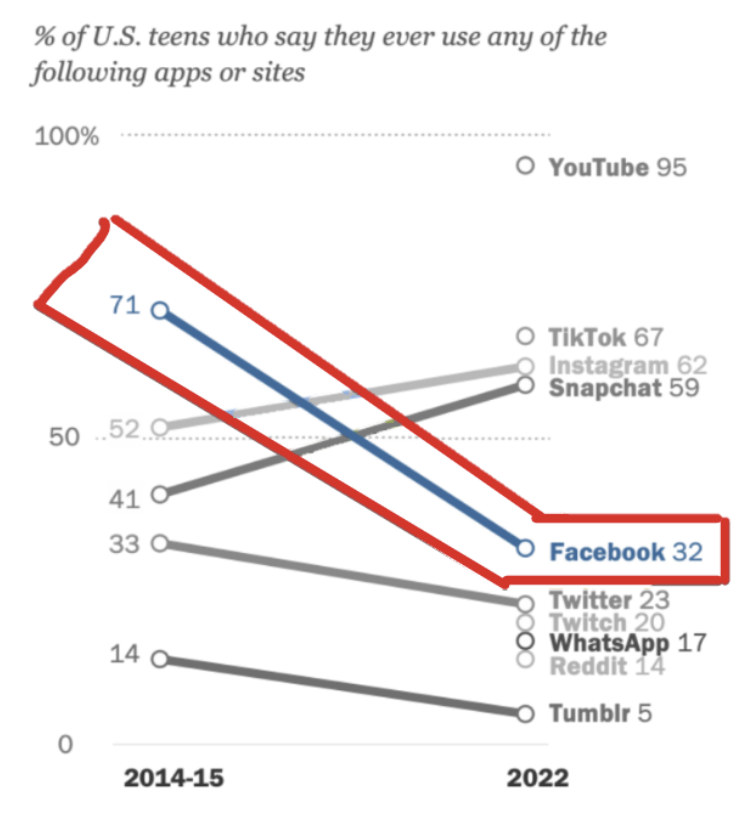 Schools have been launching anti-bullying campaigns for years and then what happens on Facebook? Bullying, hate speech, and misinformation – everything we’re trying to protect kids from. Kids have found better platforms for their social media, including TikTok, Instagram, and Snapchat.

What about celebrities? Twitter was once the preferred method for celebrities to pander to their audience, but they’ve been able to monetize their brands using better platforms like Only Fans.

Musk’s Twitter will be filled with free speech, but the voices of real users will be drowned out by malicious users and yes, bots – the same bots he complained about and tried to use as a way to pull out of the deal. The fake accounts, bots, and echo chamber posts will be free and yet, will ultimately drive people away.

And this isn’t meant as a political piece. I’m saying bad actors of any political affiliation will maliciously use any platform with an open-door policy.

You may be asking what a delisted company has to do with a free investing newsletter, so let me get to it.

General Motors (GM) recently announced they are suspending its paid advertising on Twitter. GM said they would continue the suspension until they understand the direction of the platform under their new ownership.

As John Hutchinson told me yesterday, “GM doesn’t need Twitter to sell cars.” But Twitter needs GM, and ad revenue from others, to stay afloat. Well, at least until Musk builds the super app.

If GM and others stay away from Twitter – look to find out where they move their ad dollars. There will be a couple of new companies that will be getting an influx of new revenue.

Sorry to say that my trade idea is to steer clear of the markets today. Let’s see what the Fed says and then move from there.