Update on the FRDP Economic Status Board – What Does This Mean For You?

As we reach the end of March, economic data remains solid despite Russia’s invasion of Ukraine, the Fed’s hawkish March meeting and the continued impact of higher inflation.

In the next few weeks, we should have clarity on the first quarter when GDP is reported in April.

As it stands now, February data was lower in several key areas of the economy, namely New Home Sales and Retail Sales, however, neither category fell into a contraction state and both categories experienced upward revisions to January numbers.

What this means for you: continued patience in your trading. It isn’t easy to tell you that when markets can move +1% or 2% one day and -1% or -2% the next.

We continue to advocate for reducing your capital exposure – whether you’re trading stocks or options for the short-term (Q2), reducing position sizing, and taking profits as frequently as possible.

Changes worth noting: The 10-2s Yield Curve remains dangerously close to inversion. Jobless claims fell to a 50+ year low last week (which implies a beat on the forthcoming March Jobs Report (in April).

New Home Sales fell to 772k, but remained above the 12-month moving average. Likewise, Retail Sales rose .2% (excluding autos) which was far below estimates, but remains in positive territory. January Retail Sales were revised upward to 4.9% (a big revision).

Taken together, this is what we mean when we say the economy remains solid. March data (due out in April) will give us a better picture of the impact of Russia’s invasion and higher gas prices, since those did not impact markets or consumers until March.

One of my favorite analysts, Tom Essaye at the Seven’s Report, he explained a divergence in yield spreads, namely the 5-year to 3-Month and the 2-Year to 3-Month curves have expanded significantly while the 10-2s spread has contracted to its current level.

For a true inversion ‘recession’ signal, it was explained that all yield curves would need to invert, although not simultaneously. That’s not happening in the shorter duration yield curves; it is happening or is closer to happening with longer duration curves (7 and 10-year).

Also, the 5yr-3mo and 2yr-3mo curves are steepening – see graphs below to see what’s different and how it will affect your trading in the months ahead. 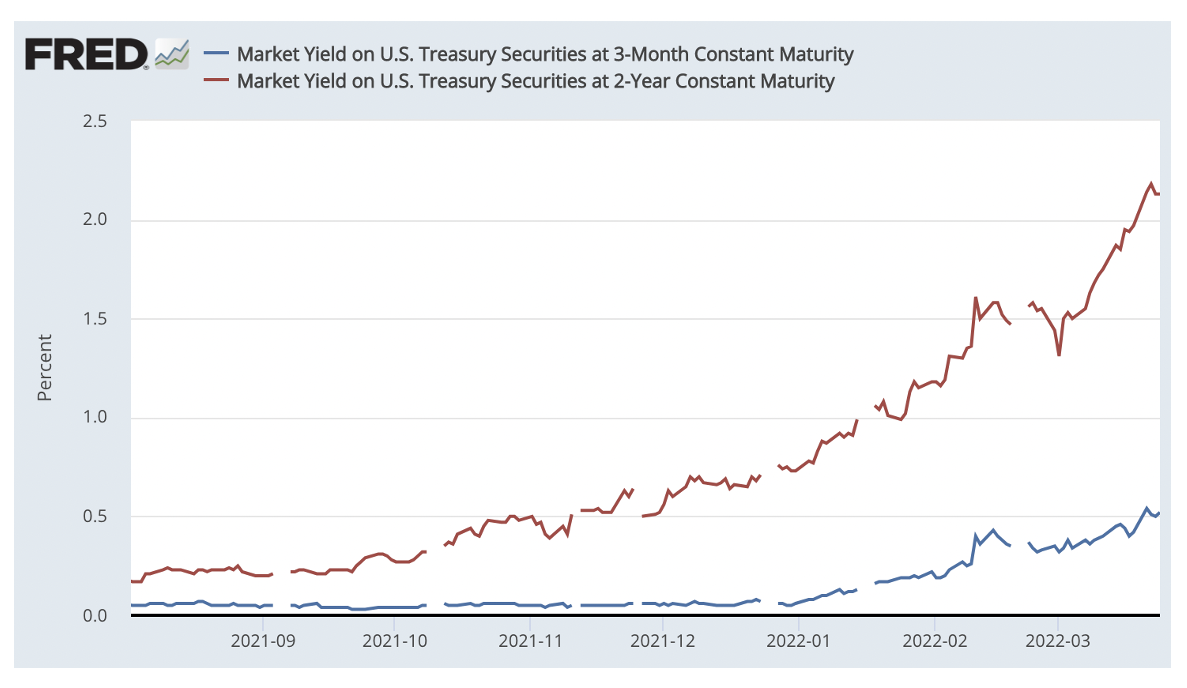 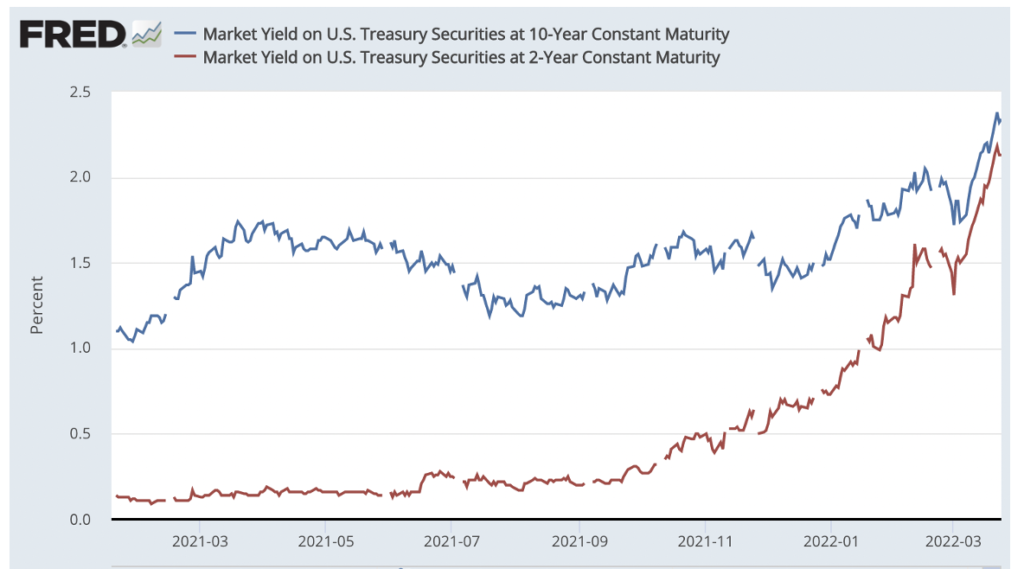 What does this mean and how does it impact you as an investor or trader?

Money flows into the shorter end of the bond market tells me you should expect continued volatility, no matter what happens with Ukraine.

Notice in BOTH shorter duration graphs, the rate of change since January and February (pre-invasion). So, Ukraine, by itself isn’t moving markets permanently.

This is related to expectations for interest rate increases. It is also because investors abroad have nowhere else to put their money (safe havens) – and I don’t mean Russian oligarchs 🙂

It’s important to note that both curves also inverted (the 3-month yield would be higher than either the 2-year or 5-year) as far back as the 2000-01 recession. They acted as confirmation signals for recessions which ultimately occurred.

Since they are not close to inversion, I see the odds of recession at this point as LOW.

Possible, but low. Consumer data from the next quarter, April through June, will determine the probability of a recession and we should expect some weakening in consumer numbers coming out of March.

We will update the status board again next week.