I won the bet.  I have to take my wins when I can.

The Fed raised rates by 0.5bp, the largest increase in two decades and the market rejoiced.  Perhaps, more importantly, was the message that was delivered.  Fed Chair Power said they are not considering a .75bp increase.  Treasury Secretary Yellen said she sees a possible soft landing and solid growth in the year ahead.  Most anticipated the rate increase, but everyone wanted to hear the message behind the increase, and the language was mostly positive.

The big question is how fast do you raise rates and can you afford the time to see if the rate hike works before it’s too late?  Powell said inflation is still too high and that an additional 0.5bp increase could happen in the future.

The Fed delivered exactly what the market predicted, and we finally get to move past the uncertainty of the meeting.  The markets staged an afternoon rally and finished up 3%.

As I mentioned on 5/2, the SP500 tends to stage a mini-rally after the meeting.  Will we get any continued upward momentum from here?  We are still in the midst of an earnings season where most companies are offering lower future guidance.  I think the dust settles in the next couple of days and we get a better sense next week, but I’ll certainly take advantage of this opportunity of higher premiums.  I don’t mind selling calls on green days and selling puts on red days.

Here’s a chart from late February 2022 through early May 2022.  We’re at the same price.  And look at the two bars I’ve highlighted in orange.  Big up days and back in February, it was followed by a steady decline for two weeks.  Sure, it rallied from there for about two weeks and then it once again retreated over the next month.

My point is that while the market is giving a little bullish move here, the overall trend is still bearish and market-neutral tactics that take advantage of high volatility are still working more than straight directional trades.  That doesn’t mean you can’t be successful as a directional trader, but I’m keeping trade sizes smaller and taking profits quicker on my directional trades.

Rivian Automotive (RIVN) has earnings coming up on May 11th.  Look at RIVN puts for the May 13th expiration.  There are several contracts with thousands of contracts traded.

Now let’s look at the call side. 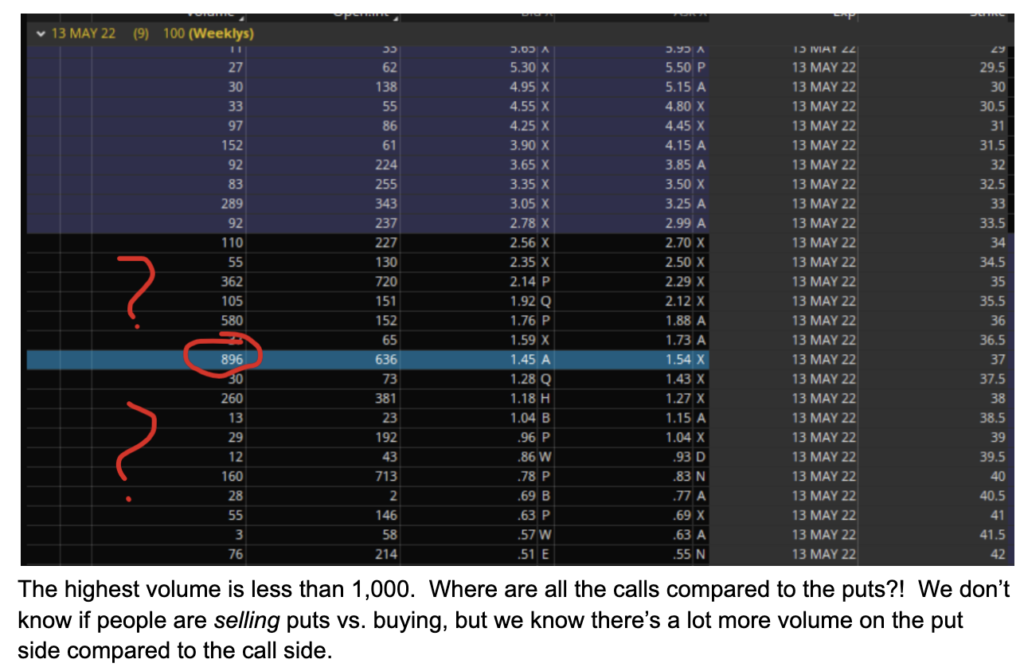 General Motors (GM), Ford (F), and Tesla (TSLA) already released earnings and had bearish days.  I don’t think Rivian will be the automotive company to buck the trend.

You can still use a market-neutral strategy like an iron condor, but you can set it up with a bearish bias.  The market is expecting a move of $6 by May 13th, but instead of selling strikes at +/- $6, you could look to sell the $25 put and sell the $37 calls, the two strikes with the highest volume from the images above.  You’d then have to decide how wide you want the legs to be based on your risk tolerance and then buy as such.

What happened to Real Estate?  It’s a good thing REITs offer dividends because the real estate market is the big loser on the 1-week performance chart and middle of the road on the 1-month chart.  After a large slump from stocks like Netflix (NFLX), the Communication Sector finally had a bit of a rebound, but still remains at the bottom of the longer-term performance charts. 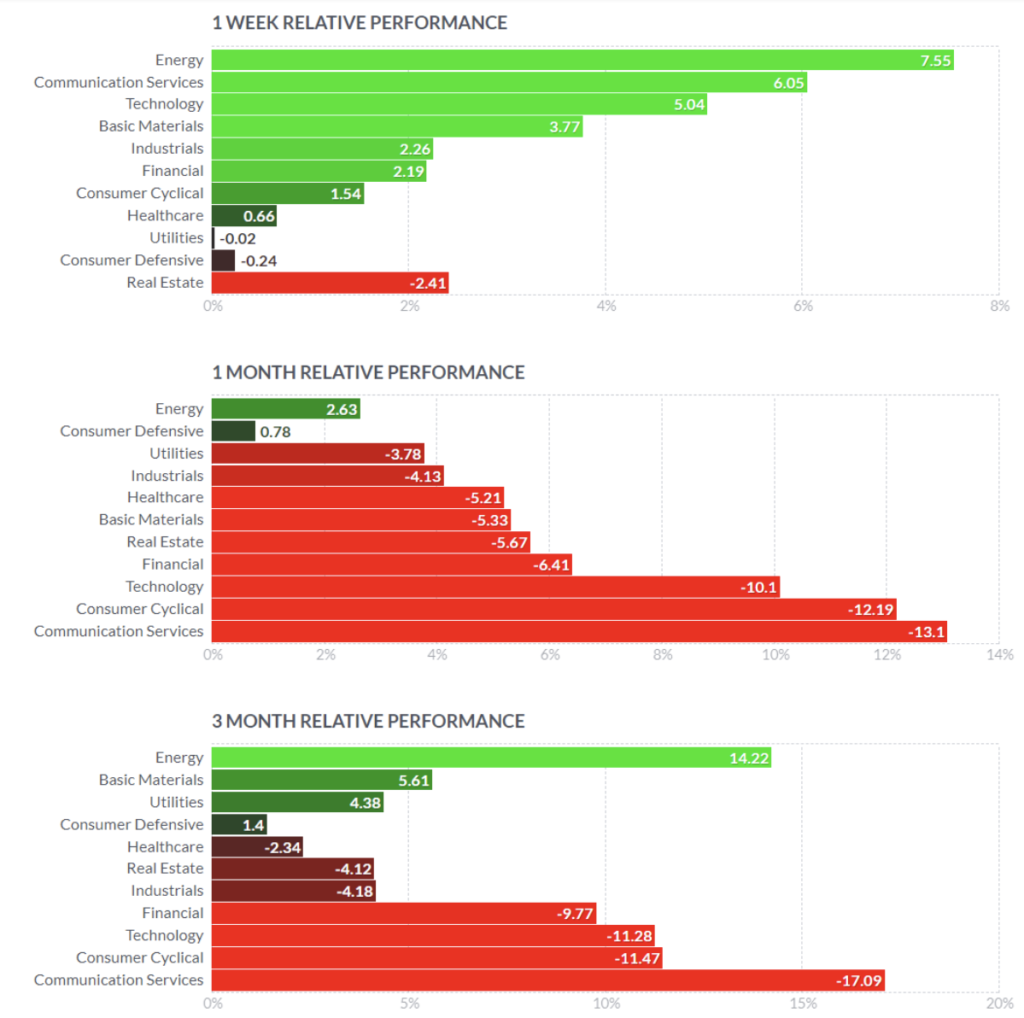 In the trade idea, I wrote about open interest and used Rivian (RIVN) as an example.  You can use the options data to determine key trading levels.  We don’t know if people are buying or selling the calls or puts, but you can often tell key areas of support or resistance at the levels of larger-than-normal open interest.

If you’re trying to figure out which option to sell (or buy), check out the volume and make sure there’s a market for your position.  If you’re the only one trading a call or a put at a certain price, you may have a difficult time getting rid of that option.  This is a crucial piece of information to look at when selling options.  If the volume isn’t there, the distance between the bid and ask will be greater and you might have to turn over hard-earned profits to get out of a trade.

Check out options volume and make sure you’re trading within a group and you’re not being an outsider.