What the New Homes Sales Data Is Telling Us

The US Census and US Department of Housing and Urban Development issued their monthly new residential sales report last week for March 2022.  Sales of new, single-family homes in March were at a seasonally adjusted annual rate of 763,000, which dropped 8.6% under the revised estimated amount.

There were 407,000 homes still for sale at the end of the period, which is up about 33% from March of last year and up 3.8% from February’s numbers.  Could this be an indication that the red-hot housing market may start cooling off?

Total homes sold have been cooling off for 3 months in a row, while there’s been an increase in the number of homes not started.

Total homes still for sale at the end of the period have been increasing over the last three months as well.

Ah, but there’s more to this story.

The numbers themselves are saying the housing market is slowing, which could drive prices down.  Before a recession hits, you’d see the housing supply increase, foreclosures increase, and home prices trend lower.  Is this report an early warning sign for a recession?

When COVID came through, the homebuilders were hit once again, following major losses and bankruptcies in the industry after the 2008 housing collapse.  As workers left to find new jobs,  the entire industry has found it difficult to keep up with demand.

Homeowners were left with knocking down existing homes and rebuilding, or doing renovations to existing homes, all of which don’t count toward new home sales.

We have a situation where the supply of new homes doesn’t meet demand combined with people who don’t want to move after their renovations are complete.  Even if they did want to move, where would they move to?  This is causing record-low inventories of homes for sale, which is also keeping prices elevated.

Inflation and supply chain issues are still wreaking havoc on the industry.  From my own experience, I’m waiting on laundry cabinet doors that were ordered about three or four months ago.  If you ask around, chances are you’ll hear similar stories.

Low supply and higher prices of building materials have driven up the price of homes to the point where it doesn’t necessarily make sense to sell your home and upgrade when the cost of the upgrade may be overvalued by 20%.  If you are willing to overpay for a home, let me know.  It comes as-is, including the missing laundry cabinets.

Now as interest rates rise, the cost of a mortgage is going with it and that is driving fewer people to leave their homes.

While the number of new home sales came in lower than estimates for March and the total number of homes available for sale increased, I’m not so sure this is a precursor to a recession.  We still have a high demand for a product in short supply.

However, if we see a continued trend of jobless claims going higher and an increase in the trend of the number of homes available for sale, it might be a sign of weakness to come.  This is why we added New Home Sales to our economic dashboard that we showcase each week.

GE has lost 18% since 4/21, heading into earnings.  The market didn’t like the news, with it losing 4.7% on the day of earnings.  Since then, it has rebounded slightly with a base around the $75 price level.

While I don’t like negative earnings plays, GE’s news was that it still has ongoing challenges and revenue was flat to slightly up.  Earnings reported were $0.20 instead of the estimated $0.24.

Looking at an iron condor, here are some areas I’d look to place your strike (strikes to sell in red, and strikes to buy in green).  I started looking at the June expirations and looking at the $85 and $70 strikes.  This trade can become profitable with a sideways move and volatility decreasing. 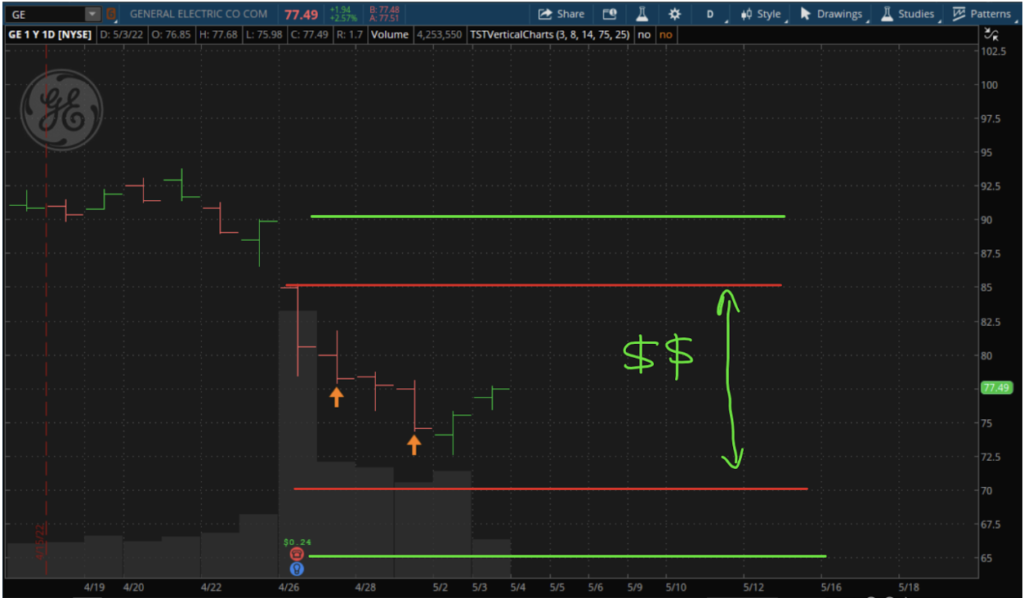 The markets continued to gyrate on Tuesday.  The one-week sector performance graphs changed quite a bit from yesterday, but still bearish sentiment overall.  Who said Energy was overbought? 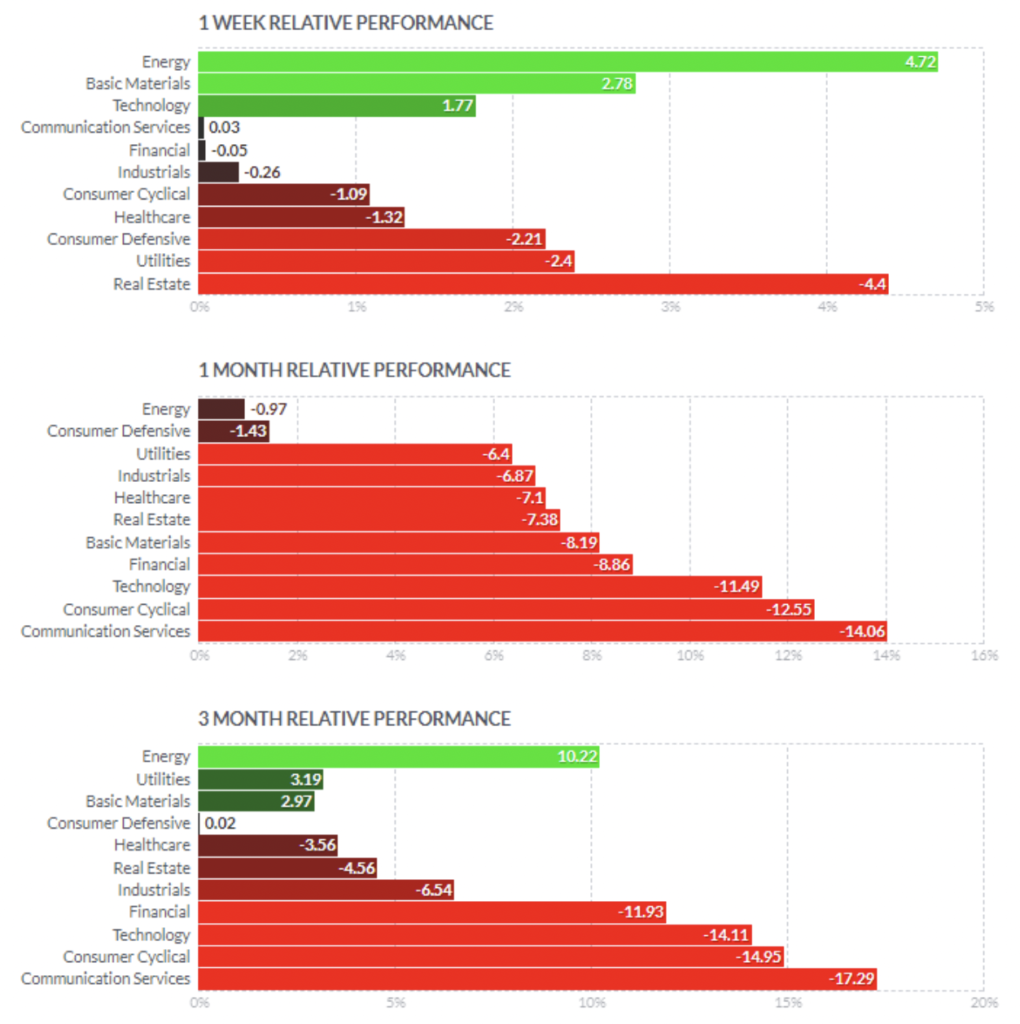 I know we’ve been focusing on point and figure charts this week, but I have one more tidbit of information on the subject.

Today we’re going to look at a chart of APPLE (AAPL).

What I like about the p&f charts is that they are easier to spot areas of support and resistance.  As you can see in the chart below, there are periods where the column of X’s hit the same price level and change into a column of O’s, and conversely, there are columns of O’s that hit the same price and change into a column of X’s.  It’s not an exact science, but I started drawing the green, horizontal lines at price levels where multiple columns hit the price and reversed.

Based on my lines I see the following zones for AAPL: 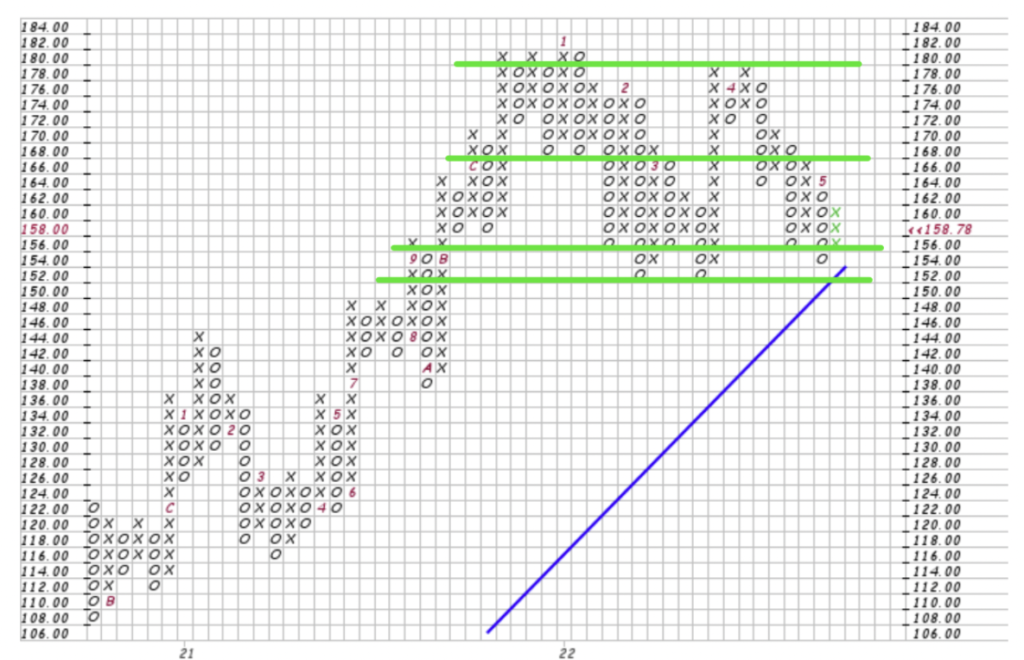 Now let’s take a look at a candlestick chart with the same lines for support and resistance. 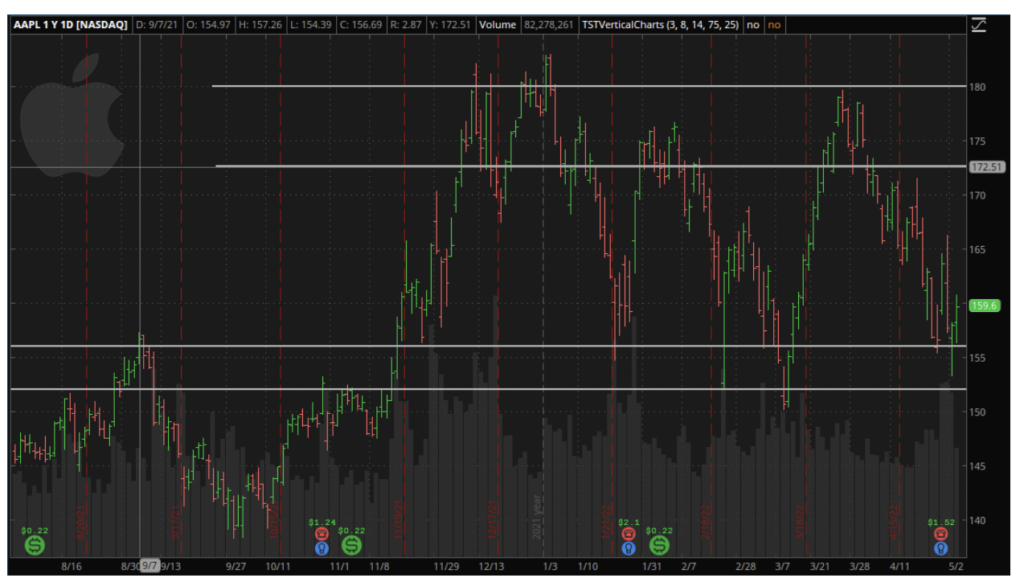 Our lines from the p&f chart are pretty good on the candlestick chart too.  It’s great if you’re comfortable identifying support and resistance on a candlestick chart, but some people have mentioned that they struggle with reading a chart, so I wanted to provide an alternative way of looking at the same information.

I’ve shown p&f charts to a handful of people over the years and some really like looking at those better because they find they can spot key levels just by looking at where the columns change from X’s or O’s or vice versa.  One chart isn’t better than the other, but trading is all about finding what works for you and one of my jobs is to help you on that journey.

What do you think? Do you like point and figure charts? Have you used them in the past?

If you’re tired of looking at charts and don’t want to learn about new chart types, but still enjoy trading, you should consider Triple Play Income.  The service, managed by Dave Durham, looks to maximize income from dividend stocks by giving you three ways to collect premiums.  You get training videos, tools, and other resources including trade recommendations, a portfolio tracker, and ongoing Q&A webinars.  Right now they are giving you a 90-day trial membership to test drive the service.  Go here to reserve your spot today!