What’s Really Behind The Mega-Cap Move?

The market took a breath of fresh air yesterday after triple witching last week. Triple witching is the simultaneous expiration of stock options, stock index futures, and stock index option contracts all on the same day. This happens four times a year; on the third Friday of March, June, September, and December.

Typically triple witching offers a positive return by the end of that week and a bearish return the following week. So, of course this year has to be different. Last week several markets moved outside of their expected moves, so maybe we’ll continue to see a bullish week after the triple witching event instead.

Have you been keeping up with Bitcoin? It dipped down to below $18k on June 18th, and has been on a steady rise since then and crossed back above $20k, showing that investors are willing to get into riskier assets once again.

You know that I like to present the relative performance charts of the sectors, so now let’s take a look at three different time frames and look at how the sectors have shifted. 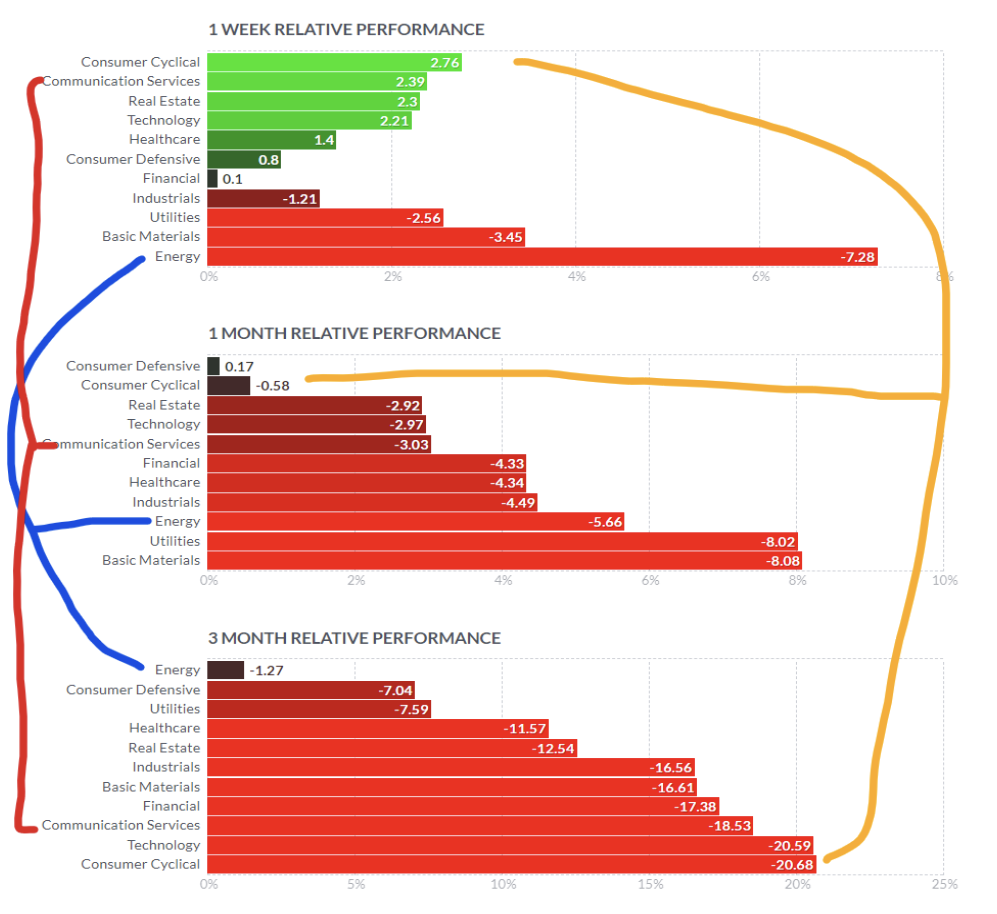 Consumer Cyclical stocks are the worst performers over 3 months, but now sit atop the leaderboard of the 1-week performers.  Energy was the best over the 3 months and now the worst over 1-week and near the worst in the past month.  Follow the colored lines and you can see how some of the sectors have rotated over time.

Consumer Cyclical stocks include some of the mega caps like Amazon (AMZN), Alibaba (BABA), Home Depot (HD), and Tesla (TSLA).

The question is if this is another bear rally or the start of something else.

Here’s a chart of the Volatility Index (VIX) and the lower the number, the less volatility, which usually brings higher prices in the markets.  If you notice, the highs are getting lower over time and the lows are getting higher, forming a wedge.

Now, let’s take a look at the S&P 500 chart.  We fell below the long-term trend and if the VIX is going to head back down and re-test the trend line back down to $26, then I’d expect to see the SPX chart (below) come back up to rest the $3850 level.

The put/call ratio on the market, which measures the ratio of put contracts (bearish) to call contracts (bullish), is looking oversold at a ratio of 1.13.  If you look at the chart over the last two years, anything over 1 is showing us an oversold market.  Granted, oversold doesn’t mean the market will reverse.  The p/c ratio was oversold for an extended period in April and May, but if you combine the three charts, it’s certainly looking like a case for a near-term relief rally.

The last chart I’ll show is the Russell 2000 (IWM).  The Russell 2000 index consists of smaller cap stocks than the S&P 500.  As a result, the index tends to gain ground faster than the SP500 and can lose ground faster as well.  It can be a indicator of how much risk investors are willing to accept right now.

The Russell 2000 index is at the bottom of the channel, and just bounced off that resistance line.  If we get a further bounce here, it will likely carry over into the larger SP500 index as well.

Tech stocks like Alphabet (GOOGL), Nvidia (NVDA), and Apple (APPL) all closed up more than 3%, but crude oil also had a rally of nearly 1%, which helped lift energy stocks and energy service providers.

I suppose it’s also worth mentioning that Tesla (TSLA), in the Consumer Cyclical sector, gained about 9% on the announcement that they are going to layoff 10% of their salaried workers.

If you are an options trader and want to take on a little risk, I’ll show you an options trading strategy with a potential 55% gain by July 22, 2022.

I mentioned that the Russell 2000 could rise to the upside, assuming that the broader market selling is going to take a breather this week.

Using a Bull Call Spread, which consists of buying and selling call options, we can trade the Russell 2000 by using ticker, IWM. 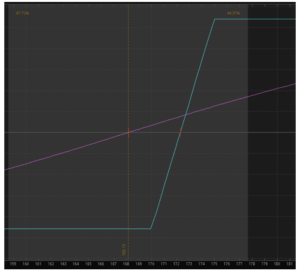