Where Are You Going?

It’s Friday, so here’s the Economic Dashboard for the week.  The Yield Curve inverted in early April had a run up to .39 but is currently falling and at .22 now.  Jobless claims rose for a second week in a row, but still at near-historic lows. 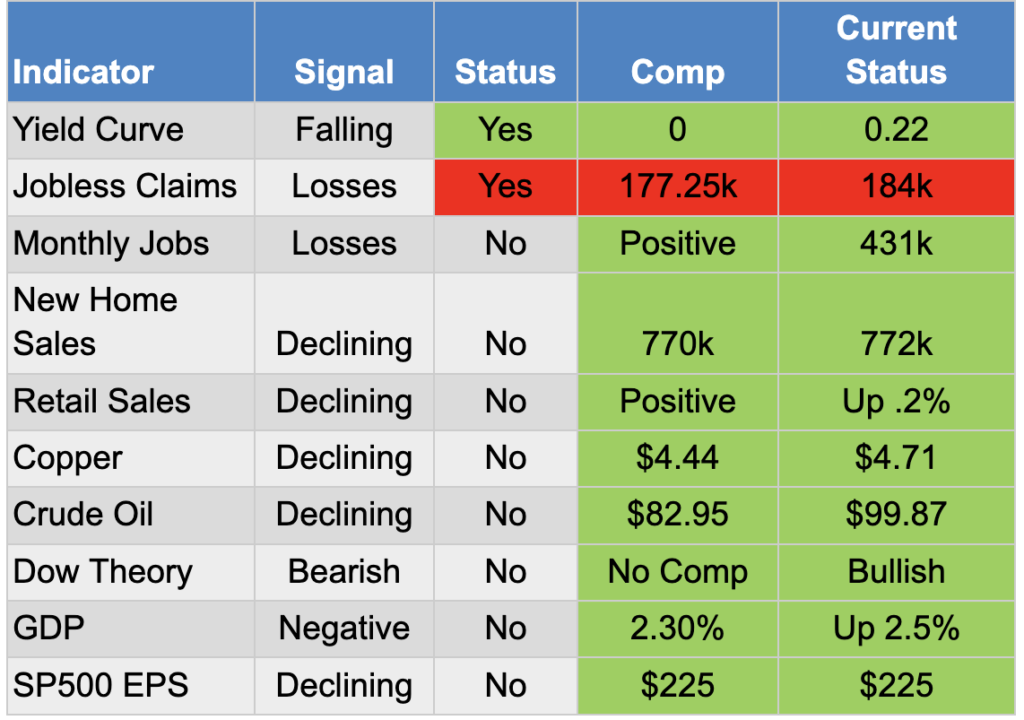 From the demise of Netflix to the rising phoenix of the travel industry, that leads me to believe everyone is leaving their homes and heading out this summer.  So, where are you going?

Earlier in the week, I mentioned that John Hutchinson suggested that I look out for the tone of earnings and forward outlooks.  In previous issues I mentioned JPM is expecting loan losses, Netflix is expecting tougher competition, and now the travel industry is expecting a resurgence!

United Airlines lost $1.6 billion but sees a better outlook ahead.  Yes, they lost money this past quarter, and it was an even greater loss than a year ago, but a positive outlook and increased revenue were enough to send the stock up more than 10% in pre-market trading after the earnings announcement.

Delta Airlines also had a loss in the 1st quarter, but both Delta and United had a profitable March, indicating that a rebound is underway.  Their headwind is higher fuel prices, but both companies discussed their way to overcome that challenge and still be prepared for the upcoming travel season and well as an uptick in business travel.

As a result, we’re seeing other stocks in the travel industry edging up.  Companies like Travelzoo (TZOO), Expedia (EXPE), and Wyndham Hotels (WH) to name a few.

Meanwhile, Netflix and other streaming services are suffering.  Comcast (CMCSA), owner of Peacock, Disney (DIS), owner of Disney+, and the new Warner Brothers Discovery (WBD), owner of Discovery+, fell on the Netflix news.

The market got spooked over the challenges that streaming services have to attract and retain customers. For the first time, people on the news have been talking about what I’ve said for over a year now…

If you have too many streaming services, it’s the same as cable!  You pay for a bunch of services only to watch one or two shows from each.  You’re still paying for what you don’t want to watch.

We’ve already discussed Airbnb (ABNB) in a previous issue and the airlines up above.  So today we’re going to talk about Booking Holdings (BKNG).  It’s one of the largest travel portals and a parent company to sites like booking.com, priceline.com, kayak.com, and rentalcars.com.

This past February they laid off about 2700 of their employees as they decided to outsource nearly all of their customer service operations.  That has allowed them to work through losses from the pandemic and be more flexible as they expand their product offerings.

The current price is $2328 and there is a double top at around $2650.  If we’re headed back up to that range, that’s still 14% percent away and offers a way to invest in an upcoming travel boom this summer – assuming the airlines’ earnings forecasts are correct.

Communication Services has NFLX so that explains the poor performance there and Alcoa (AA) had a rough day after earnings, which brought down the Basic Materials sector. 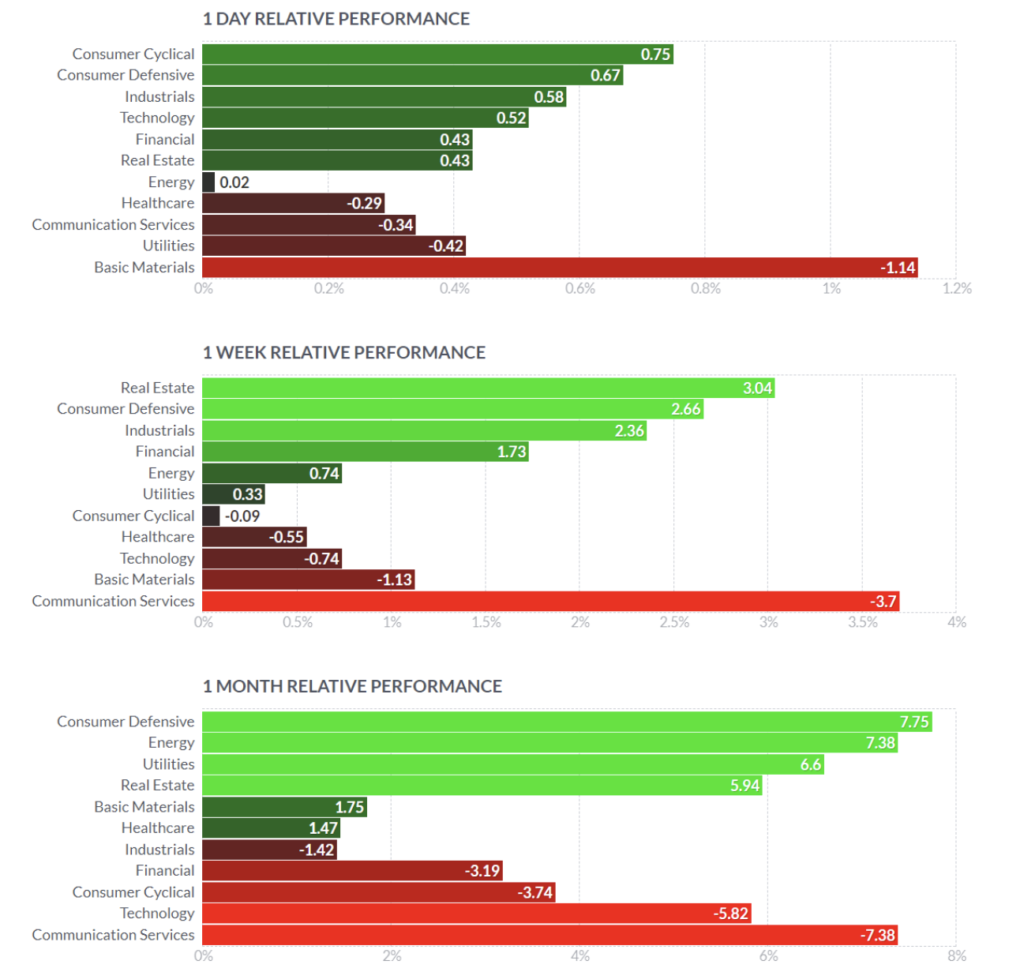 First and foremost, thank you to everyone who wrote the other day with suggestions or topics that wanted to see in this section.  Be patient as I go through the topic list, but I will get to each of them and will most likely start with those next week.

Yesterday we talked about the straddle – when you buy a call and a put at the same strike price for the same expiration date.  This is used when you believe there will be a strong move in either direction.

Today we’re going to talk about the strangle.  It’s similar to the straddle because you buy both a long call and a long put at the same expiration date, but the difference is that we buy cheaper, out-of-the-money (OTM) options whereas a straddle we buy more expensive, at-the-money options. 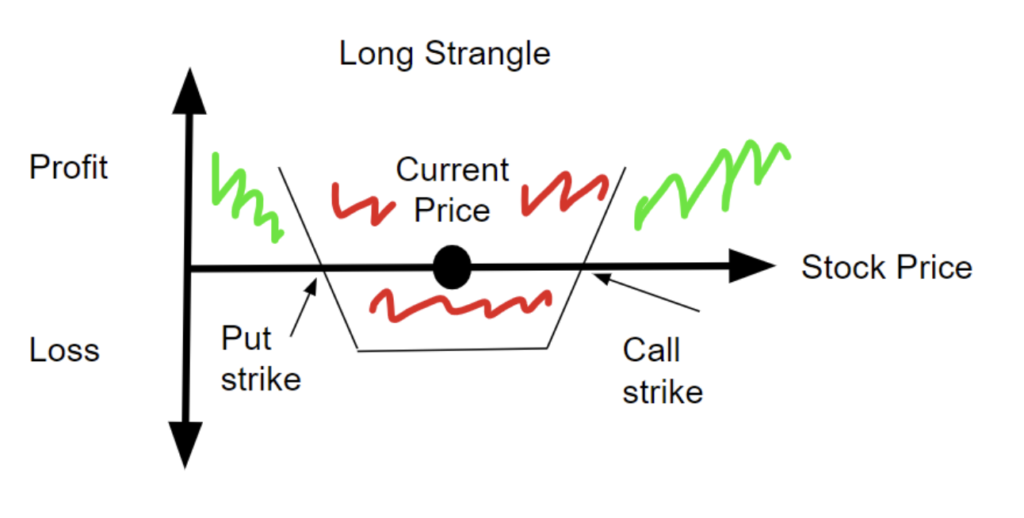 Why use a strangle vs. a straddle?  Both require large movements in the underlying stock, but since you’re buying OTM options with the strangle, your initial debit is less than it is with the straddle.

Even though your profit, in terms of dollars, is higher with the straddle, your percent return would have been higher with a strangle because your cost basis was lower.

You typically need a greater move in either direction for strangles to work, which is why many traders sell strangles instead.  Selling strangles has unlimited risk, so you can buy protection, and that turns it into an iron condor.  We’ll get to that in a future issue.

If you have any questions, comments, or anything we can help with, reach out at any time