It’s easy to get caught up in the financial headlines. I’ve certainly done it. Last week shows why I ignore most day-to-day stories. I know that may seem odd coming from someone who writes a daily newsletter but let’s look at what happened at the end of last week.

This story came from the Associated Press on Thursday:

And this came from Zacks.com, also about Thursday’s price drop in the markets: 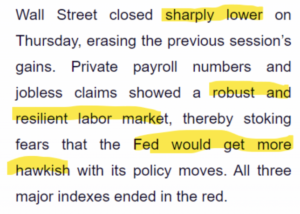 Ok, got it. The job market is hot and the Fed has more work to go. The Fed is going to get hawkish.

One day later, we got more news about the job market, but this time the results were vastly different. The news outlets explained the rally on Friday as a result of another job report. And just like that, overnight, some said the Fed does not need to be hawkish.

And this headline from Reuters on Friday:

Ok, so what really happened between all of the headlines? Thursday’s report said that more jobs were created than expected, but Friday’s ADP jobs report showed that wage inflation was down. Companies hired but they didn’t need to pay employees as much as they have been. Wages were overall higher, but just not as high as they have been, showing that inflation can go lower without jeopardizing the unemployment rate.
Let’s look at the chart of the SPY ETF though (pictured below). You can see that despite all of the hype, not much happened. 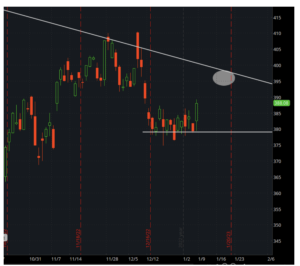 That said, I wouldn’t be surprised one bit if we head lower from Friday’s close and go right back down to the lower edge of the range.

That’s how I see it from a technical perspective, but trading involves emotion and hope and this week may have a lot of that. We have the Fed and another CPI report this week. You never know what is going to happen on CPI days.

I understand the economic situation we are in and the desire for transparency, but yet again this week is filled with Fed speeches throughout the week.

Thursday – 8:30 am EST – CPI – The market is expecting the year-over-year number to come down from 7.1% to 6.6%. Even the month-over-month number is expected to decline from 0.1% to 0.0%. The only number in the CPI report that is expected to go higher is the month-over-month excluding Food & Energy number. That may increase by 0.1% from the last report. I think the market will read this as a bullish sign, but remember, just because the CPI report shows inflation is coming down doesn’t mean the Fed will change course.

Thursday – 8:30 am EST – Jobless Claims – As previously mentioned, last week brought significant market moves due to various jobs-related reports. This report, combined with the CPI report being released at the same time might cause a significant move. The consensus is that there will be 215k claims, up from 204k last week. Remember, last week was much lower than expected though, so the 215k is similar to what has been expected the last couple of weeks.

This is NOT a trade recommendation. This discussion is for education only.

If you think the market is going to move based on the reports this week and you think that we could finally break free from the range-bound market, you can use the options strategy, called a Straddle. This involves buying a call and buying a put, both at the same strike price with the same expiration date.

For example, if you think the market might move this week, you could buy an at-the-money straddle on SPY with a 27 JAN 23 expiration date. I went out a couple of weeks because you don’t want to buy too much time, but the time value will erode quickly with fewer days-to-expiration, so I was trying to find a middle ground.

The 27 JAN 23 $387.50 straddle costs $14.43, or $1443 per position. That means you need SPY to move by more than that by expiration for the trade to win, but the trade can still be profitable before that.
Here’s the risk profile of the trade. To keep things in perspective, the market made a 2% move last Friday. Placing this trade would require a greater than 2% move by this Friday for this trade to essentially break even. If you think there is an opportunity that the S&P 500 will continue going higher this week and make another big move with the CPI report later this week, then this trade might work.

You can also see that the trade starts losing money quickly if that big move doesn’t happen, which is one reason why I’m not a big fan of straddles. I know people who trade them and profit from them, but you really need to be able to time that big move.

The trade would be a loser this Friday if SPY is still trading between $378.87 and $395.33. However, if the market makes a larger than 2% move in either direction by Friday, the trade becomes profitable. You can also dump the side that isn’t working and let the other option ride to expiration if you think the directional move will continue beyond this week.

The straddle is one way to use options if you think the market is going to move strongly in one direction, but you’re not sure which direction that will be. Since you’re buying two options and options decay with time, you need to be quick to exit the trade if the anticipated move doesn’t happen.