I don’t know how many of you have gone out shopping, but I’m a little disappointed to see how slow most stores are. I know, who goes into stores anymore? Well, I do. Maybe it’s a bit of nostalgia, but sometimes I like going into a mall or going into a store, talking to people behind the counter or asking for advice. Well, I could certainly do that this past weekend – also known as Super Saturday.

We’ve already seen weak retail numbers and more talking heads come out about being cautious going into 2023, so I get why places are a little more empty. I know there have been online sales going on since October too, but anecdotally I’m seeing a hesitant shopper.

And maybe they have good reasons to be. I’m working on a story that is more about 2023, but for now, let’s take a look at where we could go over the next week or two.

The U.S. Dollar Index has been moving in an inverse relationship to the equity market, meaning the $DXY hit its high in September as equities were nearing their lows. Then as the equity market had a bit of a rally on news that inflation was coming down and the Fed was going to lower the amount of each rate hike, the $DXY started falling. However, now we’re sitting at a support level and should $DXY head up from here, we are likely to see equities fall. A break below this level would be a bullish sign for equities though. 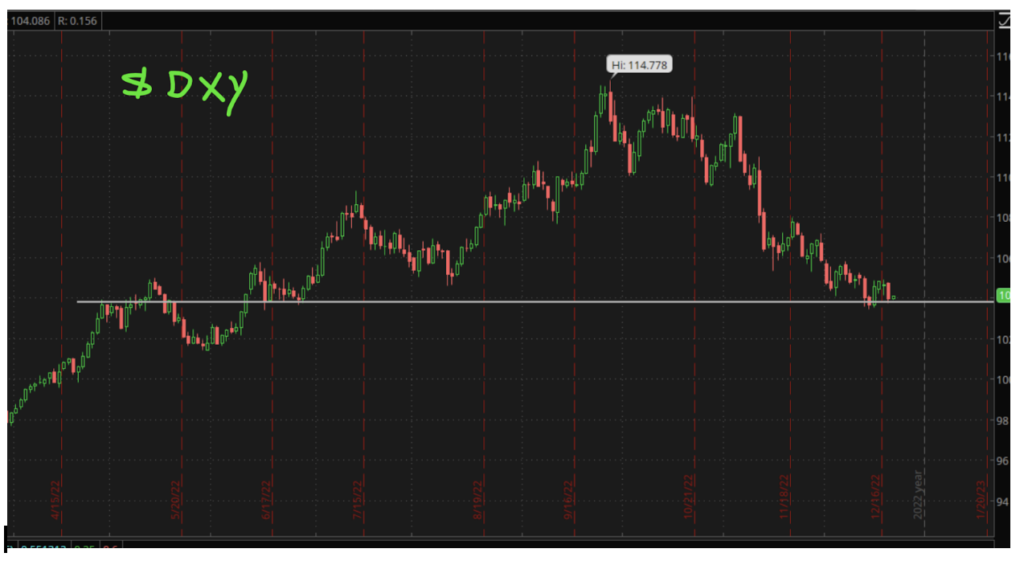 Now, some of you know that I like to look at the S&P 500 equal weighted ETF.  I’m looking at ticker RSP.  I wrote yesterday that the average Santa rally is about 1.5%.  The RSP is trading around $139 and a 1.5% increase would get us to $141.25 and sure enough the next Fibonnaci retracement level is $141.82.  Now, maybe the market breaks down, but we know that several of the hedge funds and pro traders have started their holiday break early, so it’s not likely that we get a major break down from here either. 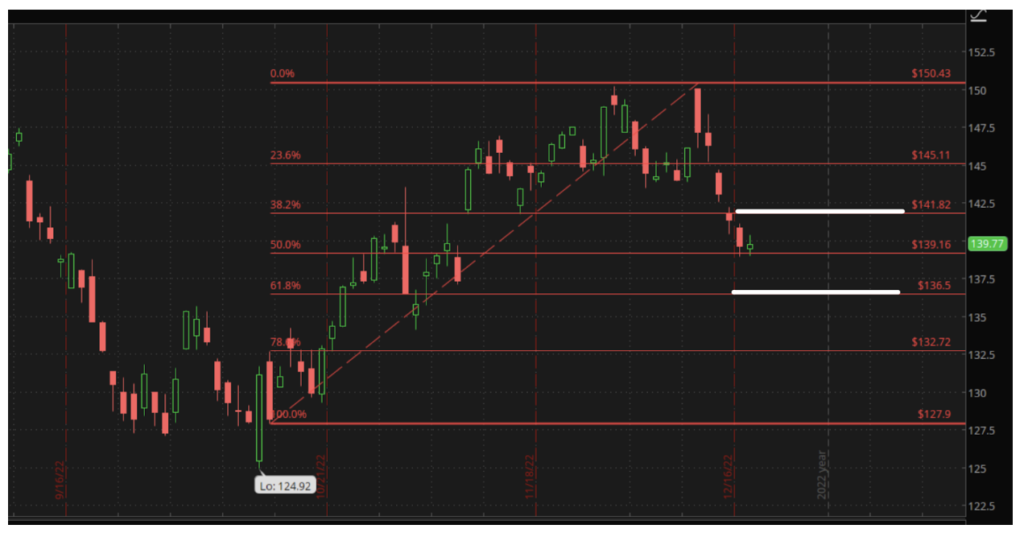 Now, let’s see if we can go figure out an options strategy trade idea around this hypothesis that RSP will be trading between $136.50 and $141.82 over the next couple of weeks.

Some of you are part of the Options Testing Lab service and know that I love trading iron condors, especially when I don’t have a strong conviction for direction. Let’s start there.

RSP doesn’t have weekly options so we’re going out to the January (23) expiration.

We have the levels we think RSP may stay between, so let’s sell a call at the higher strike closest to our resistance level and a put at the lower strike, closest to our support level.

You can see that we are not setting this up with the current price in the middle of the two options we’re selling. It’s a higher risk setting it up this way, but if you feel strong about certain levels, this is a great way to increase your premium for an iron condor trade. Our max risk on this trade is $148 because we’re taking in more premium, but as you can see from the profit graph, we have a tighter window to be correct.

The breakeven levels if you held this to expiration are $133.50 and $143.50. I would plan on holding this about two weeks and re-assessing. 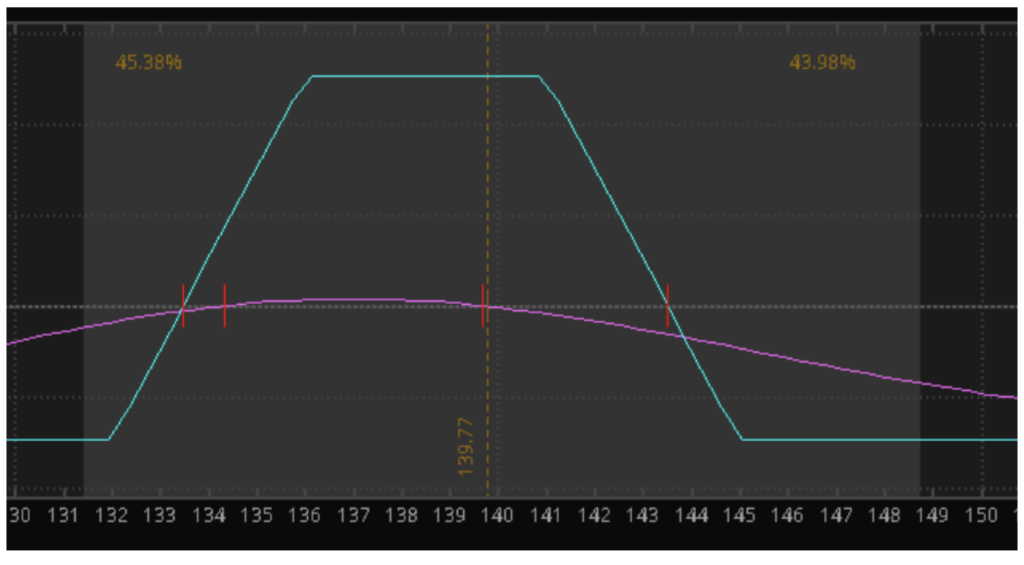 Another trade you could try is taking the same iron condor concept with four options legs, but instead we’re going to move the strikes you sell to be near the current price. Instead of selling strikes at the outer limits of where you think the price might go, we’re going to collect a higher premium right now by selling near at-the-money options. 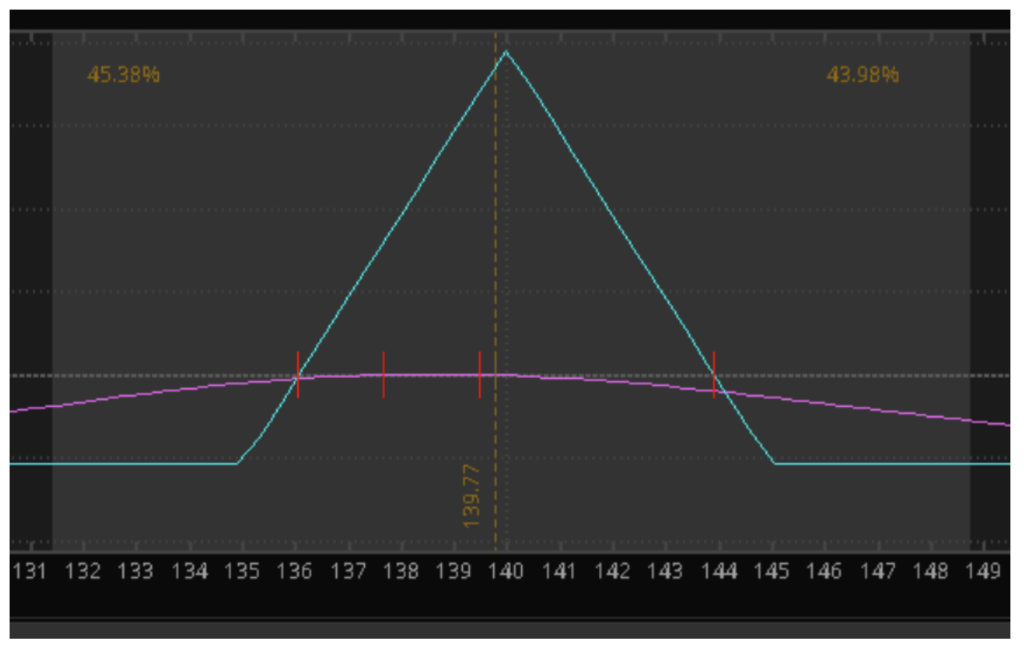 You can see from this profit graph that the trade is profitable as low as $136.50 (our support line) at expiration and would be at max profit if RSP closes right at $140. Remember, I said RSP may go as high as $141.25 in the next couple of weeks.