I was having my morning cup of coffee on Sunday, I looked at my news feed on my phone and started to laugh. From this image you can see the progression of how various outlets reported on the jobs news over the last week. 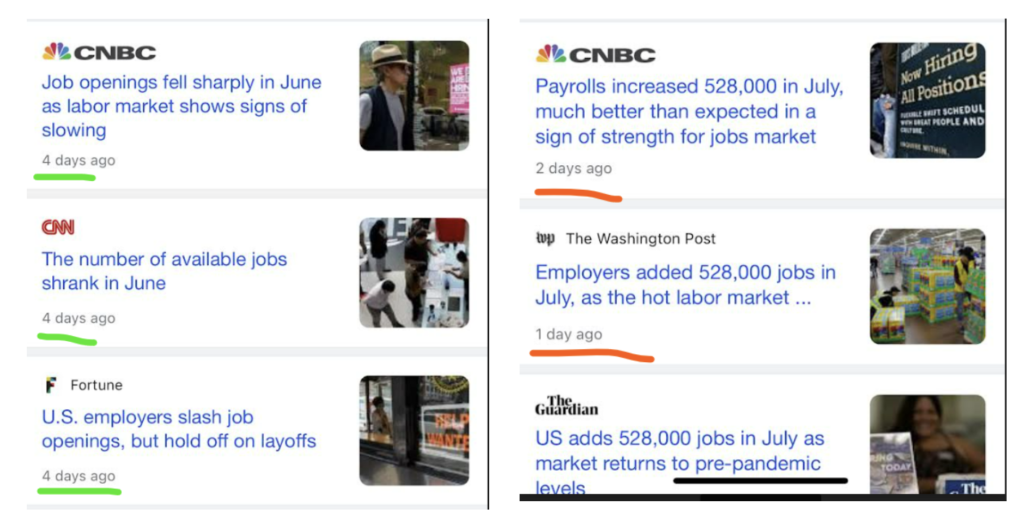 We started off with articles about how the labor market is slowing, jobs shrank, and employers slashed job openings.  All hope was lost at the beginning of the week.  Until a couple of days later and then we get articles about how payrolls increased more than expected, there’s a hot labor market, and jobs return to pre-pandemic levels.
The good news is that wages are still up over 5% from a year ago.  The issue is that wages aren’t increasing at the same rate as inflation, which is why you hear so many stories of consumers cutting spending.
What does all of this mean for the future?  Are the jobs reports good or bad?  My take is that it means the Fed has more work to do and will likely be forced to raise rates more aggressively.  The market had a nice run the last couple of weeks on the notion that the Fed was on track, but the job market isn’t cooperating and this may push the Fed to get more aggressive with rate increases.  And that may spell bad news for the markets.
Keep reading to find out the key levels for the S&P 500 and what reports are likely to move the markets this week.
Let’s take a look at some key S&P 500 levels for this upcoming week.
Here’s the SPY weekly chart.

You can see the next level of resistance a little better by drilling down to the daily chart.

This has been a line of support in the past and turned into a line of resistance.  I thought we were overbought last week, but we ended up mostly flat.  With the VIX trading lower, I wouldn’t be surprised to see a somewhat flat week ahead, staying somewhere between 406 and 421.

Ok, let’s get to the reports you need to know about this week.

Wednesday – CPI (MoM and YoY) – Analysts are projecting that the Consumer Price Index goes down in both month-over-month and year-over-year categories.  The Fed will be forced into aggressive action if we don’t see the CPI numbers come down, especially after last week’s unexpected positive jobs report on Friday.

Thursday – Producer Price Index (PPI) – Forecasts are showing a decrease from 1.1% down to 0.3%.  If the number falls, that could mean a wider profit margin for companies or they could pass some of the savings on to consumers, resulting in lower prices.

Have a great week of trading!