Will This Trend Wreck Investors Again?

During the keynote to our recent Millionaire’s Trading Club event, John Hutchinson pointed out the divergence between the S&P 500 and the 10-2’s spread (the yield curve), and how this short-term trend has resulted in significant pullbacks in the S&P 500 this year.

And it’s set up again ahead of yesterday’s Federal Reserve meeting.

First, each time the S&P 500 has rallied this year, the yield curve has acted as confirmation or non-confirmation of that rally.

When the yield curve turns higher, the rally is supported.

But when the curve turns lower, the rally collapses, as we saw in April, June, August, and September.

The move higher in late October in the S&P 500 corresponded with a move lower in the yield curve. 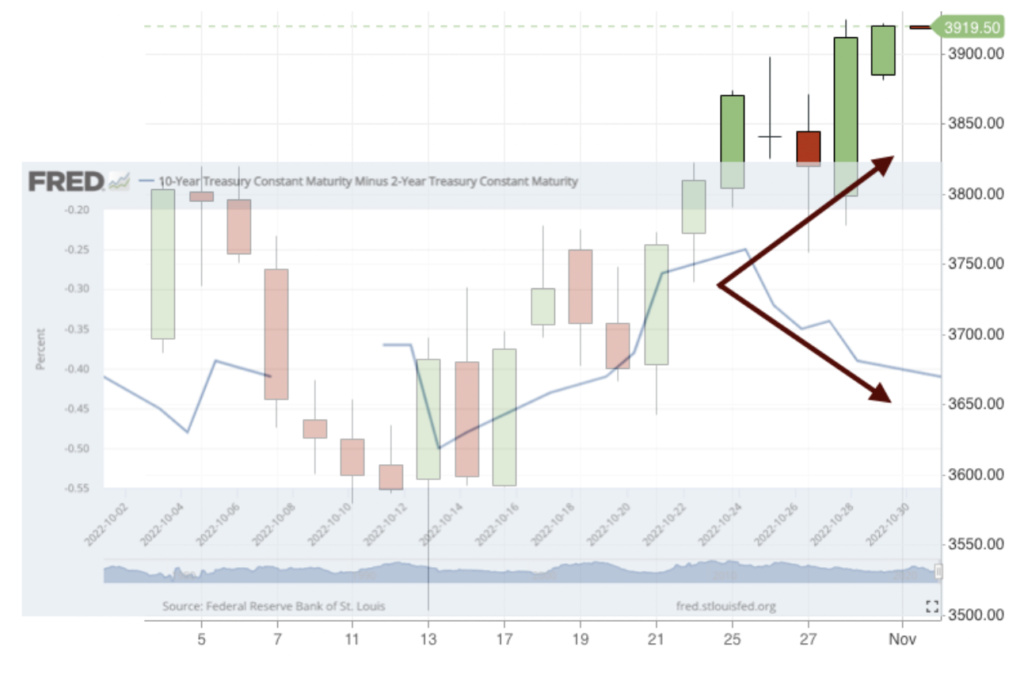 You can see the mid-October rally supported by the move higher in the yield curve. What’s concerning is the large move lower in the curve from October 25 onward (from -25 to -43 basis points, not a small move).

The expectation was for the Fed to raise rates by .75% again this week and hint at a .50% increase at the year-end December meeting.

However, what we got yesterday was a little different.

The Fed is meeting the market’s expectations; but what the Fed isn’t doing is ending rate increases.

Not only are they not ending rate increases – they are moving the target up. The Fed decided to raise the target range for the federal funds rate to 3.75 to 4.00%. They will continue to raise rates until they hit their 2% inflation goal and again committed to doing whatever it takes – even if that means forcing the country into a recession in 2023.

While data shows a slowing in the economy across different sectors, including housing and manufacturing, inflation has not moved. At all.

A decrease in inflation, coupled with a shift to neutral in Fed policy is what this market needs in order to rally back above 4200; neither of those conditions exists.

Whatever market rally we’ve seen in the last month was based on the hope that the Fed would potentially pause rate hikes, and Powell made it clear that he is more apt to over-tighten rather than under-tighten in order to avoid “entrenched” inflation.

That means inflation data and the labor market are the two most important factors to watch in the coming quarters.

Overall demand still outnumbers supply and the labor market remains tight with near record-low unemployment, which causes wages to go up. One way to tell if the public is worried about the economy is how they react to the upcoming shopping season. We’ll get into that and so much more in future articles.

We recommend that you continue to trade as defensively as possible. An overshoot in this rally can result in a rapid -5% to -10% move lower.

No specific trade idea for today. I’ll get back into that later. I am looking for setups after the dust settles from the announcement.