You Can Do This, We Can Help

HoI used to work in advertising and certain slogans are stuck in my brain.  “You Can Do This, We Can Help” came from Home Depot and was last used prior to the recession in 2008.  Well, Home Depot, the market needs your help and now would as good as time as any if you have any tricks up your sleeve.

I had something else planned for today, but it’s hard to ignore the 1,000+ point drop in the Dow.  The Dow lost 3.5% and the SP500 lost 4% in its worst day since June of 2020.  I was looking at the volume, and sadly it was fairly normal.  Those looking for some type of a washout, capitulation day are going to have to keep looking.

Sure, volume was higher than the last couple of days, but both the reversal at the end of 2018 and the reversal from the covid collapse in 2020 had more volume than today.  I mentioned a couple of days ago that I thought we’d have a shakeout day where the SP500 drops 5%, and we came close today, but it was an organized day of selling, which has me holding off on bullish moves.

While there was a broad market sell-off yesterday, there’s one chart that shows us what’s really happening underneath.

Keep reading below to see the earnings outlook for the rest of 2022.

This one chart is showing us where the market breakdown happened.

Here’s the 1-week relative performance chart of the majors sectors.

Some of the largest retail chains, like Walmart (WMT), Target (TGT), and Home Depot (HD), are in the Consumer Defensive sector and their earnings reports that came out this week are signaling a tough road ahead.
Let’s look at it a different way.  As far as earnings this quarter, here’s a chart of the SP500 companies reporting above, in-line, or below estimates. 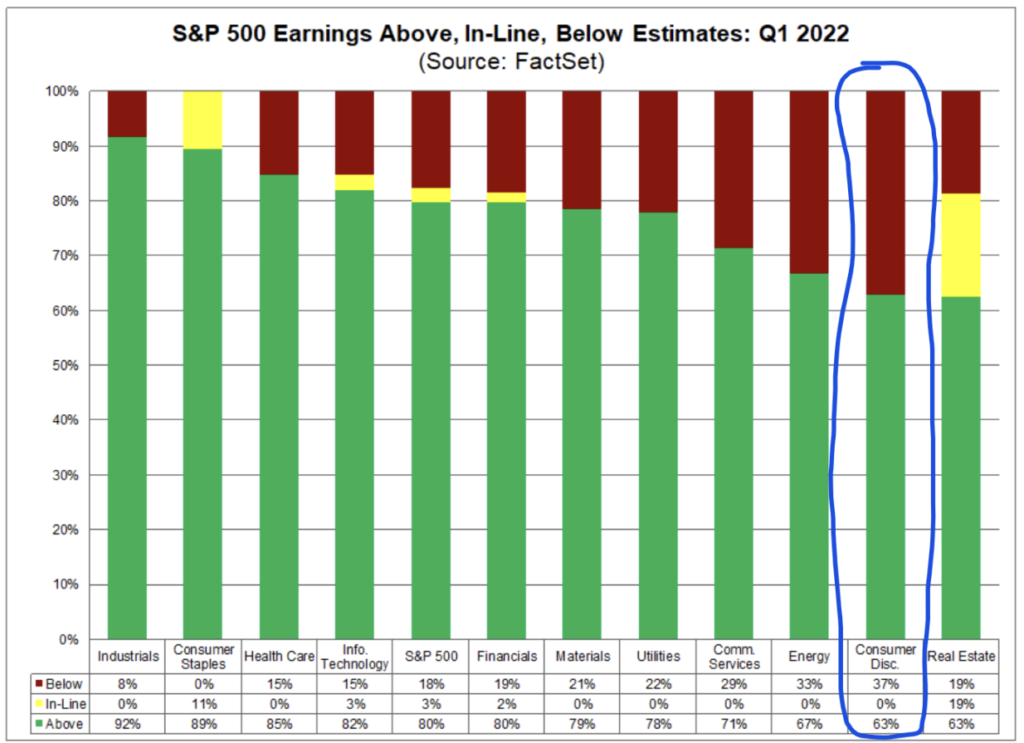 The sector with the worst earnings season so far is Consumer Discretionary with 37% of the companies missing earnings estimates.  Remember when Amazon (AMZN) came out and said they’re seeing people spending less?  That was a foreshadow of the mess this week.

Consumer Spending is shifting.  Walmart (WMT) announced that customers are walking out with fewer purchased items as more general merchandise saw increases in prices.  They also noticed that more people traded down to cheaper brands or smaller items like half-gallons of milk.

Target (TGT) said that foot traffic was still high this past quarter, but similar to Walmart, they saw changes in what types of goods people bought.

A common theme that came out of the retail industry earnings calls this week is that they are experiencing profit margin pressure due to supply chains woes, cost increases in freight and transportation, and inflationary pressure on the goods they sell.  It doesn’t help that as we enter the summer months, consumers are transitioning some of the discretionary spending to travel.  If they can’t afford a TV and a vacation, they are choosing the vacation.

Here’s another way of looking at this – look at the earnings growth per sector. 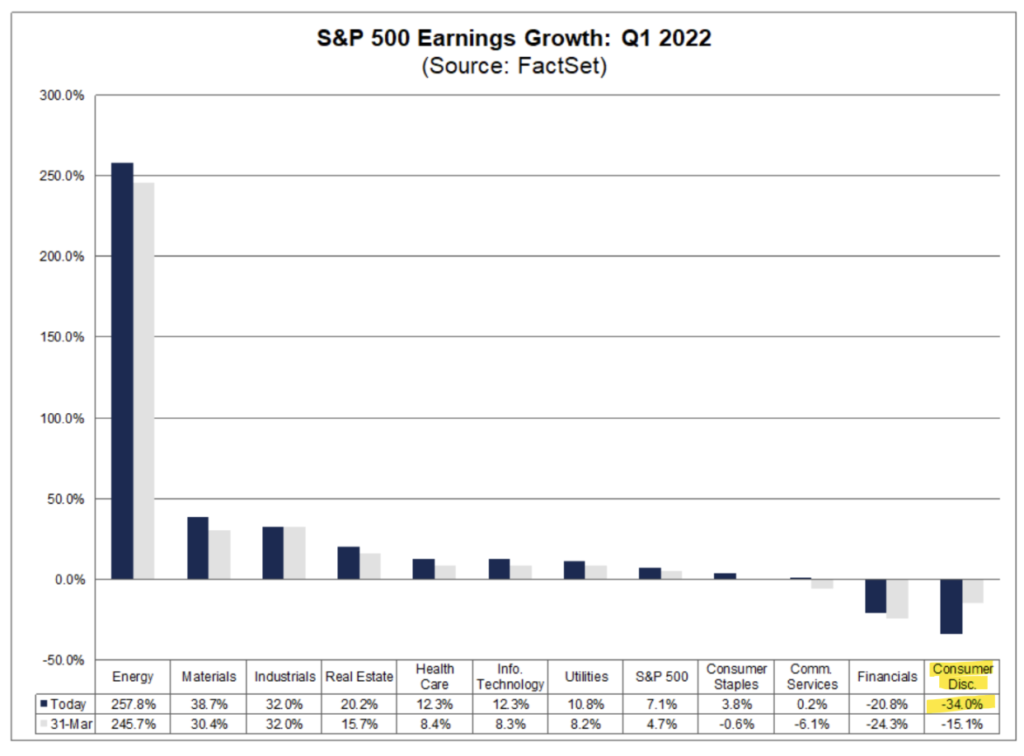 Financials and Consumer Discretionary are the only two sectors that are reporting a year-over-year decline in earnings growth. There’s a 7.1% actual growth rate for the quarter for the entire index, but it will mark the lowest earnings growth rate reported by the SP500 since Q4 of 2020.
We’ve seen reports in the past couple of weeks that seemed to show consumers shrugging off higher prices and still spending, but the retail giants are saying they have data that shows consumers are indeed feeling the pinch and are adjusting accordingly.
Outlook for the Rest of 2022
We’re currently sitting at 7.1% earnings growth rate for Q1 and analysts are projecting a growth rate of 5.5% for Q2, 10.9% for Q3 and 10.5% for Q4.
This means we have another rough quarter ahead before we may see inflation under control. I’ve said that things look oversold, but sometimes oversold doesn’t mean the trend is over. Most technical analysis indicators are saying this market is oversold for time the time being, but yet the selling persists. What about fundamental analysis?
The forward P/E ratio on the SP500 is 18.1, which is below the 5-year average (18.6) and below the forward P/E ratio of 19.4 from the end of the first quarter (March 31, 2022). Forward earnings estimates have ticked up a bit over the past month.
To me, that is showing that while it’s a time to be cautious, there are some bargains out there that could be worth a look. Dollar Tree (DLTR) got caught up in the retail sell-off, but if we are headed to a recession and if Walmart and Target and saying customers are shifting to lower-cost items, Dollar Tree is a perfect candidate to poach their customers.
The stock had been holding its own in 2022 and dropped over 14% in one day over news caused from their competitors. It’s a low beta stock, trading at a discount with a forward P/E of 14.94 compared to its current P/E of 23.18. It also just dropped and touched its 200 moving average, and was able to close above it.